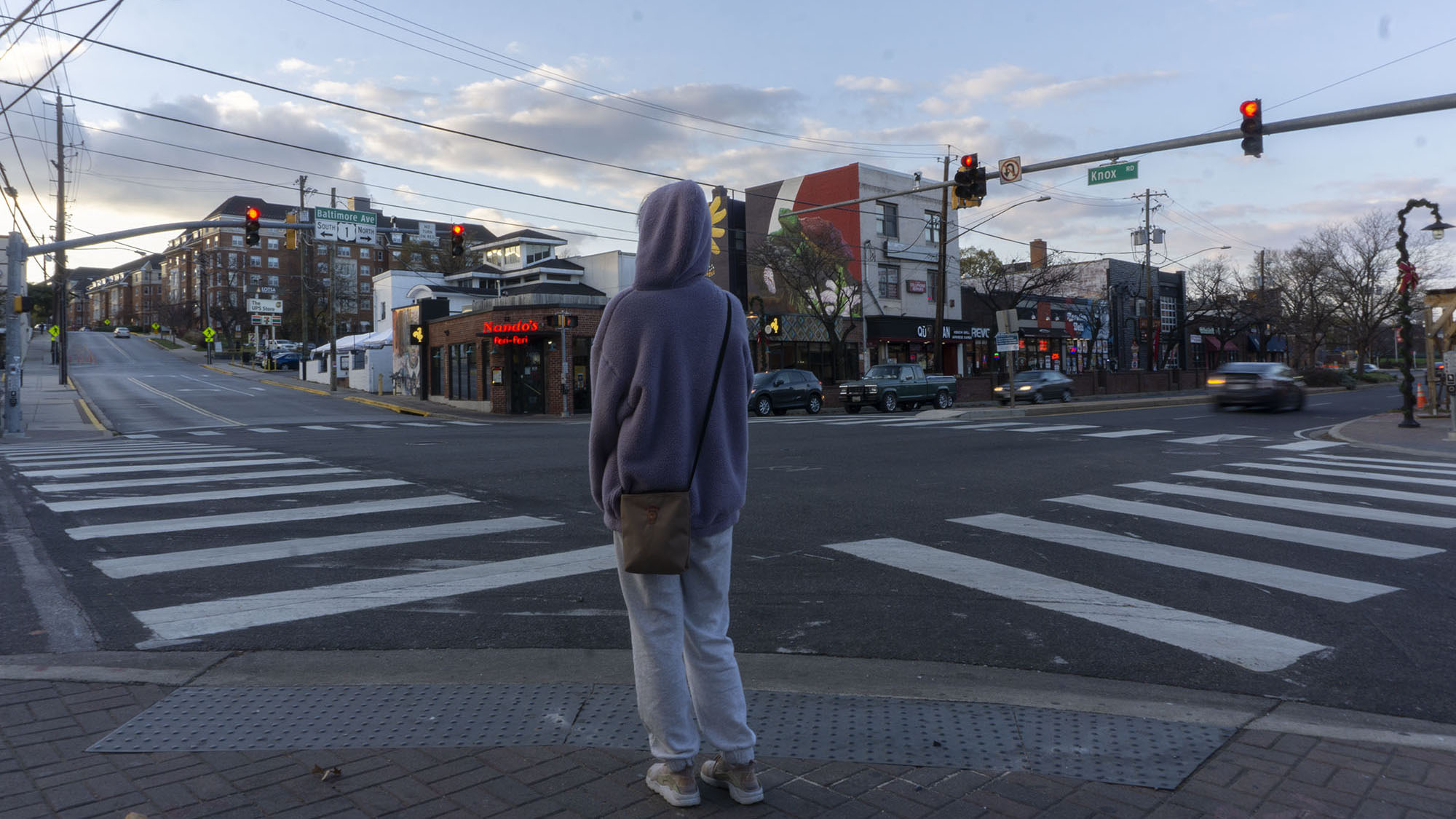 The instersection of Baltimore Avenue and Knox Road on Nov. 23, 2020. (Taneen Momeni/The Diamondback)

When Jane Lyons was a student at the University of Maryland, she’d routinely cycle down Guilford Drive as cars sped by. She didn’t have a car, so she relied on her bike to get to classes and other places around College Park. And without infrastructure like bike lanes, the “share the road” signs weren’t enough for her to feel comfortable riding in some places, she said.

Nearly two years ago, County Executive Angela Alsobrooks launched Vision Zero Prince George’s, an action plan to improve road safety for pedestrians, cyclists and other people on roads, and achieve zero fatalities on roadways by 2040. And two months into 2021, residents and transit advocates say there’s still work to do when it comes to pedestrian safety in the county.

“There are definitely some places that I would never bike to so I was never going to bike along Route 1,” said Lyons, who graduated from this university in 2019. “The lack of Vision Zero and bicycle and pedestrian infrastructure definitely changed how I decided to get from place to place.”

Lyons, who works as the Maryland Advocacy Manager for Coalition for Smarter Growth, a coalition of advocacy nonprofits and groups focused on housing, land use and transit policy in the Washington, D.C., region, is excited by the action plan. But she knows that safe roads require reliable transportation infrastructure that many parts of the county lack.

“For the past many decades, most of our infrastructure spending has been spent on infrastructure for cars,” Lyons said. “We now have a system that tries to get as many cars through neighborhoods as possible instead of focusing on the safety of people and other options like walking safely on a sidewalk or biking.”

DW Rowlands, a volunteer for Prince George’s Advocates for Community-Based Transit, walks and takes the Metro as much as possible. She knows the challenges that pedestrians face, particularly while walking in some areas in the county.

“You end up with a three-foot wide sidewalk right up against the road with people driving 40 miles an hour, which isn’t very safe, even if you aren’t trying to cross the road,” Rowlands said.

University Boulevard and Route 1 are built in a way that encourages drivers to speed and pedestrians to jaywalk, Rowlands said.

“[Langley Park] has some very long blocks, which is a problem because, in theory, you should walk to the nearest stoplight to cross the street,” she said. “In practice, if that means adding a quarter mile to your walk and you’re carrying groceries, a lot of people aren’t going to do that.”

In 2017, the county also made a goal to reach 81 or fewer fatalities on all roads in Prince George’s County by Dec. 31, 2020, a 28 percent decrease from 112 fatalities in 2019.
Data on the number of crashes in 2020 has not yet been made available, according to an email from Paulette Jones, public information officer for the county’s public works and transportation department.

[Farewell, falafel: Krazi Kebob to close its doors next week]

The planned Purple Line light rail will have a station near the intersection of New Hampshire Avenue and University Boulevard to expand transit access. The station’s placement concerns Rowlands, who says the changing traffic patterns could make the area more dangerous for pedestrians.

“It is a tricky problem, how to handle crossing light rail tracks,” Rowlands said. “It’s good to have a long gap without the train having to stop for things, but on the other hand, if it makes it impossible for pedestrians to cross the road, that’s a problem.”

In southern Prince George’s County, some residents have seen what the problem of limited crosswalks does to pedestrian traffic.

Henderson says her community heavily relies on the public transportation network and limited pedestrian markings to get from place to place.

She’s glad the action plan is in the works, but she still has concerns that transit-oriented development could lead to gentrification and push more people in her community to move to areas in the state with lower living costs.

Karren Pope-Onwukwe, co-founder of Prince George’s Advocates for Community-Based Transit, said the action plan is vital in improving safety for pedestrians because many places do not have adequate sidewalks.

“[Vision Zero] sort of captures the way that the world is going, because people are learning that you can’t drive everywhere you want to go and you have to be able to share the roads with people and bicycles,” Pope-Onwukwe said.