Despite loss, Nicole Alford showed out for Maryland volleyball against Minnesota 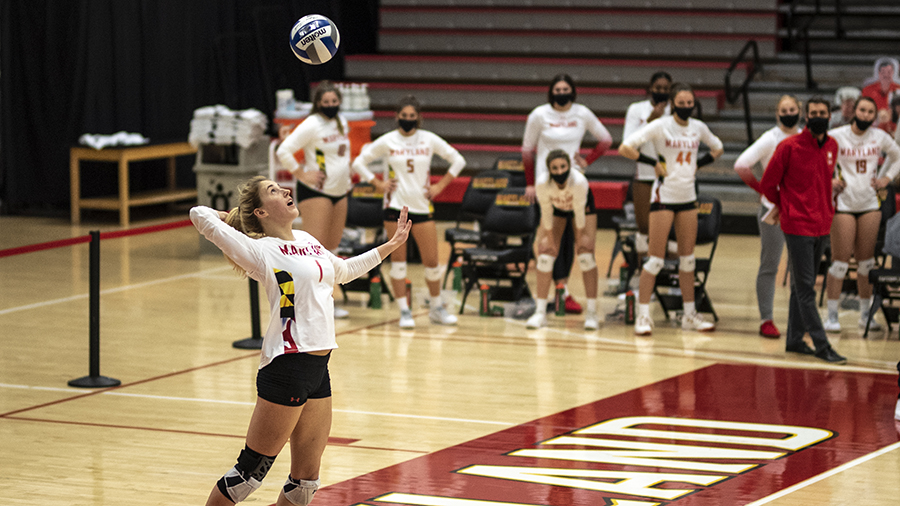 Nicole Alford prepares to serve during Maryland volleyball’s 3-0 loss to No. 7 Minnesota on Jan. 30, 2021, at Xfinity Pavilion. (Eric Harkleroad/The Diamondback)

After losing two matches in straight sets to No. 7 Minnesota, Maryland volleyball dropped to a disappointing 0-4 on the young season.

“Just too many long runs,” coach Adam Hughes said of his team’s performance against the Golden Gophers. “They kind of closed the gap and made it out of reach.”

Despite four straight losses to open the truncated 2021 season, Hughes and the Terps have benefited mightily from the steady play of senior setter Nicole Alford, who registered 55 total assists in the two matches against Minnesota.

“I thought Nicole, over the weekend, was setting at a pretty high level,” Hughes said. “I thought she was on the run a lot, still keeping us in system.”

Alford, who missed a substantial amount of time last season due to nagging injuries, has returned to full form to help lead Maryland through a tough stretch of matches against high-powered Big Ten offenses.

“We’re working on [our chemistry] every single day,” middle blocker Rainelle Jones said of Alford. “The passers are also doing their thing, getting the ball nice and high for me to get some time to get over and get with Nicole.”

Alford’s development over the course of her time at Maryland has molded her into the leader she proved herself to be through the first four matches of the season, Hughes said.

“Her maturation has been great, just her understanding of herself,” Hughes said. “I think what makes her great is that her motor is awesome, you know she’s always going to give 100 percent in what she does.”

That drive was on full display Saturday evening.

With the Terps down nine points in the second set against the Gophers, Minnesota’s Regan Pittman spiked a serve at Rebekah Rath, who passed the ball high in the air to Alford for the senior to set up the awaiting Erika Pritchard.

With all of the Gophers gearing up to defend a patented Pritchard putaway attempt, Alford recognized that Minnesota was flat-footed. She took advantage, dumping the ball straight over the net between three Gophers to give Maryland the point, snapping a 6-0 Minnesota run.

[Maryland volleyball swept by No. 7 Minnesota, 3-0]

Alford’s heads-up play gave the Terps some much-needed momentum, as they won four of the next five points to chip into the massive Gophers’ advantage.

And while Alford’s efforts didn’t amount to a victory, her drive was essential in keeping Maryland alive throughout the contest, Hughes said.

“She was keeping us afloat,” Hughes said. “I think a lot of credit goes to her.”