Maryland volleyball swept by No. 7 Minnesota, 3-0 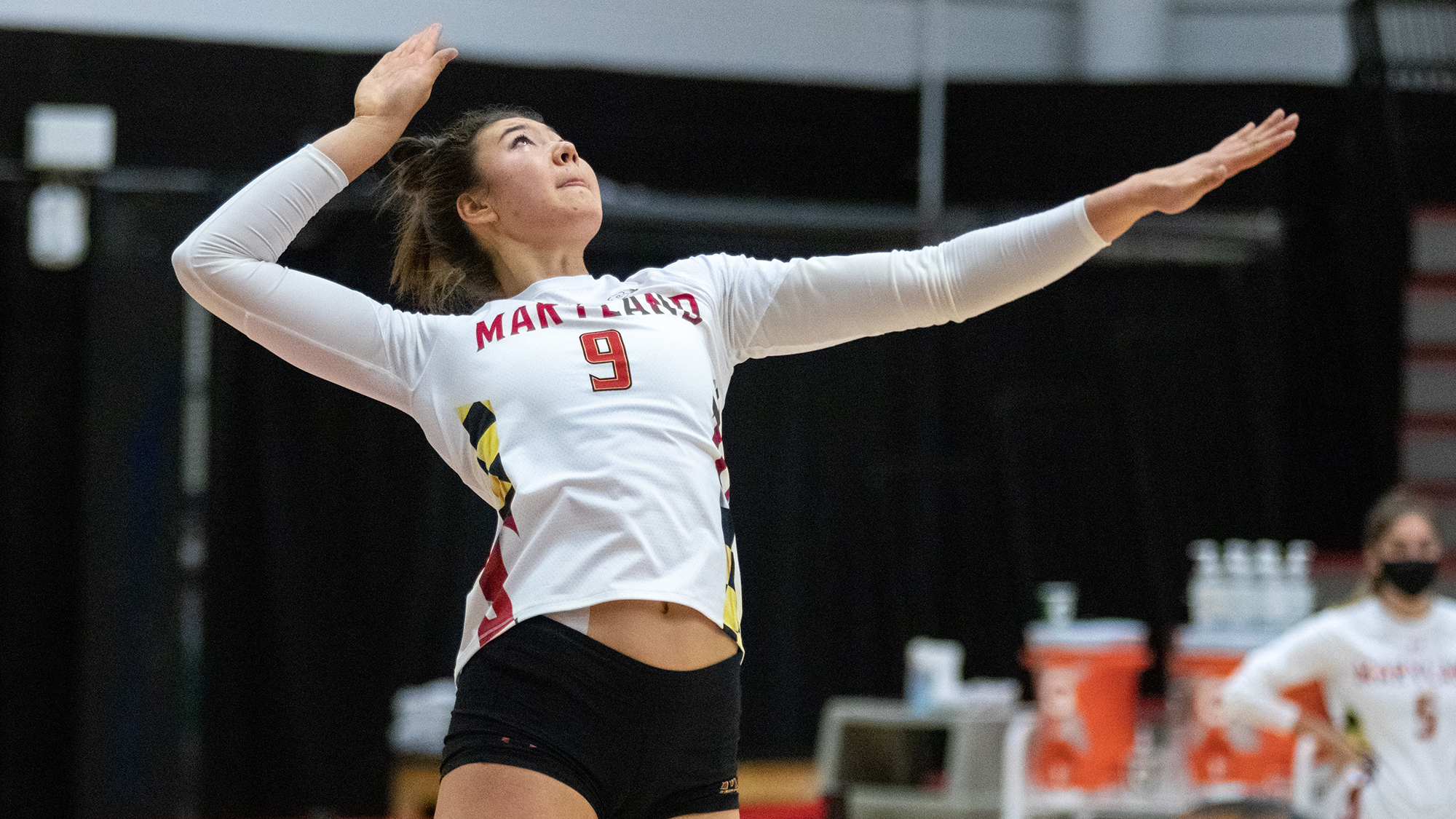 Erika Pritchard prepares to serve during Maryland volleyball's 3-0 loss to No. 7 Minnesota on Jan. 29, 2021, at the Xfinity Center Pavilion. (Julia Nikhinson/The Diamondback)

With a struggling Maryland volleyball team down two sets against Minnesota, outside hitter Erika Pritchard looked to change the tides of the match with a high-flying kill attempt early in the third frame.

As her shot rocketed towards the other side of the net, however, the Golden Gophers had an answer, sending the kill attempt right back at Pritchard and the Terps and putting the point away just moments later.

The Terps (0-3) came out of the gates with intensity early, as outside hitter Rebekah Rath spiked home the first point of the evening. However, three straight service aces by Minnesota’s (3-0) Adanna Rollins quickly stifled Maryland’s early momentum.

Despite a three-kill first set by Pritchard, Rollins and the Gophers pulled away from the Terps, taking the frame in convincing fashion, 25-16.

“Minnesota has a really good serve, they just hit a good flow,” libero Sam Burgio said of the Gophers.

While Maryland showed fight in the first set of action, Minnesota’s momentum carried over into the second frame in a big way. The Gophers jumped out to a quick 10-3 lead, fueled by early spikes from Rollins, Stephanie Samedy and Regan Pittman.

With the Terps struggling to garner any rhythm in the second frame, Maryland turned to its preseason All-Big Ten nominee in Pritchard, who chipped into Minnesota’s massive lead with a flurry of high-flying offense. She notched two kills, a service ace and an assist, charting the Terps’ rise. Soon, that Gophers’ lead had shrunk — coach Adam Hughes’ squad went on a 3-0 run to bring Maryland within four.

But Minnesota responded. Samedy and Pittman’s influence only grew as the second frame went on. Samedy racked up five kills in the second set as the Terps struggled to quell her sizable threat.

And when Maryland rallied again — scoring four unanswered points to cut the deficit to 18-15 — Pittman came to life. She sent back-to-back serves beyond the Terps’ defensive unit, letting the Gophers regain control of the set. A pair of Taylor Lanfair spikes secured the set victory for Minnesota, pushing Hughes’ squad to the brink.

[Maryland volleyball is adjusting to its unusual schedule]

With Maryland now down two sets, the team pulled out all the stops to try and avoid a sweep against its Big Ten foe. The Terps raced out to an 11-10 lead early in the frame, capitalizing on a series of Gophers’ attacking errors.

Minnesota eventually found its tempo, knotting the score at 15. That’s when Nicole Alford deftly lifted the ball in Jada Gardner’s path. Gardner rose and fired, spiking the ball beyond the Gophers’ defense — and erupting a once dormant Maryland bench as the Terps took a rare lead.

“The big thing we talked about was [to play] start to finish,” said Hughes, “no matter if we were up or down just play the same way all the way through. I’m proud of them for [fighting back].”

Maryland’s confidence continued to soar late in the third set, as three monster blocks by junior Rainelle Jones put the Terps just two points from forcing a fourth set on the seventh-ranked team in the country.

But, as was the case throughout the night, Minnesota was equal to Maryland’s threat. The Gophers’ rattled off four straight points to send the frame into a deadlock.

And with the match tied at 23 late in the third, a block assist by Rollins and former Terp Katie Myers gave Minnesota a match point. And as a Rath kill attempt sailed right, the Gophers completed their third set comeback and swept the Terps off of their home floor.

“We realize that it’s a cat-and-mouse game truly, you see what they throw at you and then you keep adjusting,” setter Nicole Alford said, “so that was a constant battle.”