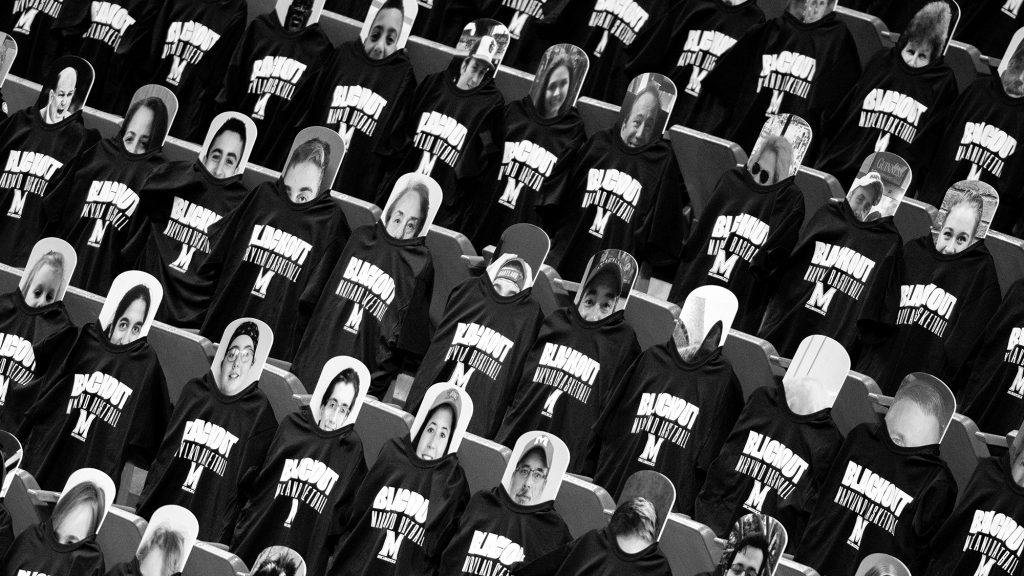 Maryland men's basketball was greeted by empty stands during its loss to No. 14 Wisconsin on Jan. 28, 2021. (Julia Nikhinson/The Diamondback)

Maryland men’s basketball started Wednesday’s second half on an 8-0 run, and when Wisconsin finally got on the board with a contested layup, guard Darryl Morsell answered right back with a three from the left wing.

But the only cheers came from the 10 men on Maryland’s bench.

Fans would typically fill Xfinity Center on a night like Wednesday, fueling the Terps with confidence and energy as it rallied against a top-20 team. Yet like most sporting events in the past 10 months, there was no one there to see it.

With scenes of packed crowds willing the Terps to victory in not too distant memory, Mark Turgeon’s squad felt the void left by 17,950 empty seats more than ever on Wednesday night.

“Typically, the crowd creates energy,” Morsell said Dec. 21. “If you are at home, they are backing you. If you’re on the road, you got the mindset that it’s us versus everybody in there, and that’s automatic energy created. With no fans, it’s definitely different.”

The Terps have benefited from empty arenas on the road this season, having snagged three conference road wins over ranked teams.

When Maryland upset Greg Gard’s squad in Madison on Dec. 28, the Terps’ bench was crucial, helping generate energy in a second half in which they outscored Wisconsin 46-36.

But with the loss to the Badgers Wednesday, Maryland fell to 0-4 against Big Ten opponents at home this year. Maryland was 46-7 in College Park over the past three seasons, so its overall home record of 6-4 is a far cry from what Turgeon’s teams are accustomed to.

Creating a home environment has proven especially difficult for the Terps in recent games. And though it wasn’t enough to close the gap against the Badgers, Maryland’s bench assumes much of that responsibility.

“You almost have to be overly excited, overly cheerful,” guard Reese Mona said earlier in the season. “It’s something we’ve got to get used to, almost being overly cheerful or making more noise than you ever made in your life because there’s no one else there to make that noise.”

Maryland was only able to muster 20 points heading into halftime, and the team added just four points in the final three minutes of the half, which is when Turgeon thought the game was lost, he said.

“We had a good run, and then we just weren’t any good for a stretch,” Turgeon said. “That’s just kinda what it was tonight … We held them to 61 in our building, that should be good enough to win.”

It was another strong defensive showing for the Terps, but Turgeon’s squad faltered when it mattered the most. It’s an environment that Maryland has excelled in for much of Turgeon’s tenure, buoyed by a raucous home atmosphere.

Maryland has five home games remaining this season, including its next one against Purdue on Tuesday. And whether the Terps are playing in College Park on the road or at a neutral site, that extra buzz won’t be there — yet another marker of normalcy snatched away amid the coronavirus pandemic.