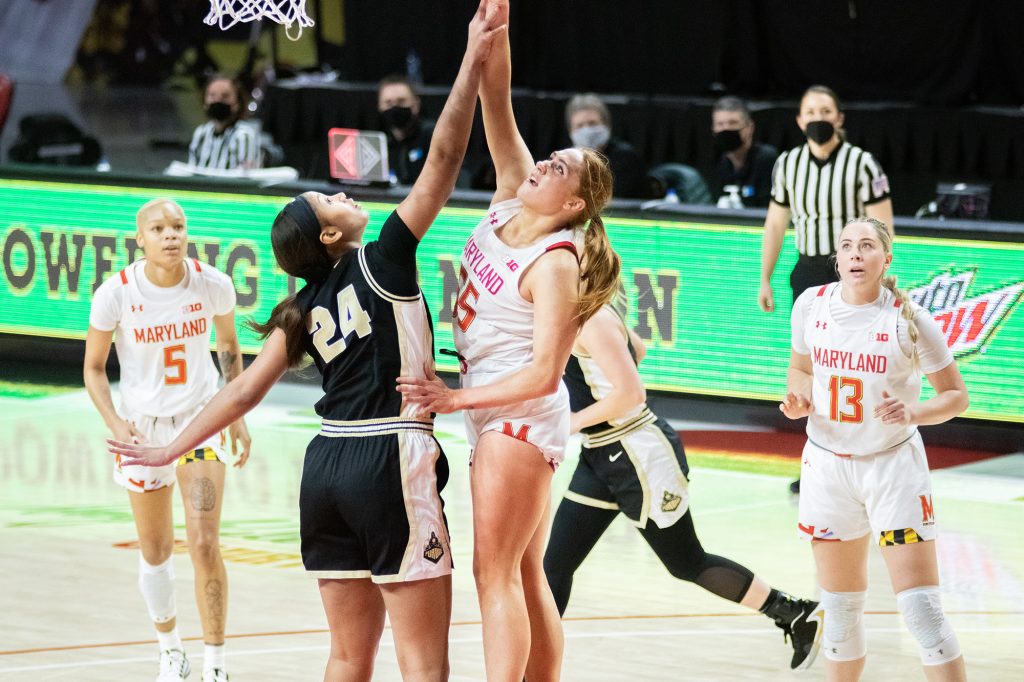 Maryland's Chloe Bibby and Purdue's RaShaya Kyle battle for a rebound during the No. 12 Terps' 83-46 win over the Boilermakers on Jan. 10, 2021, at Xfinity Center. (Julia Nikhinson/The Diamondback)

Winners of 23 straight Big Ten contests, Maryland women’s basketball is enjoying a typically strong season. The Terps are 10-1 and riding a nine-game win streak. They are undefeated in the Big Ten and lead the conference, having won all six of their matchups. They’re 3-1 against ranked opponents, have outscored teams by an average of 17.2 points per game and lead the conference in points per game — as well as three pointers made.

But despite all that, head coach Brenda Frese seemed irritated after Maryland’s 90-73 drubbing of Minnesota.

“We took accountability and we decided to show up with our effort and our intensity, you know, again they were balanced at halftime and I thought it was a terrific response,” Frese said. “But it can’t take us 20 minutes to get playing.”

The Terps endured an underwhelming first half against Minnesota, giving up 43 points to a team that averages under 70 points per game. Maryland allowed the Golden Gophers’ leading scorer, Jasmine Powell, to net 14 first-half points, including four threes.

While some of that hot start was due to unsustainable shooting by Minnesota, part of it was caused by the Terps’ poor defense. They struggled to contain dribble penetration and suffered due to miscommunication.

“I thought, you know, we had a slow start. I thought credit Minnesota, I thought they came out with a lot of fire and intensity,” Frese said. “They really shot the ball well. Obviously, we were disappointed defensively.”
With just over four minutes remaining in the first quarter, Powell ran a pick-and-roll with the Gophers’ center, Klarke Sconiers. Ashley Owusu was covering Powell and Faith Masonius was on Sconiers. But when Sconiers dove to the rim after slipping the screen, both Terps followed her, leaving Powell alone for a wide-open three — which she drained.

Early in the second quarter, Minnesota ran up the court on the fastbreak. Maryland did a good job stopping the ball, but failed to pick up the trailing Powell, who was again left wide-open for a triple.

In the first half, Powell shot 4-of-6 from beyond the arc while the Gophers made 51.7 percent of their field goals, well above their season figure of 37.9 percent — second-worst in the Big Ten.

Still, the Terps didn’t feel the ramifications of their slow start. Maryland’s defense picked up in the second half, forcing Minnesota to shoot just 39.3 percent from the floor.

But only after Frese implored her team to improve their defense.

“[Frese] definitely got on to us, but that’s what we need. I mean we’re a young team, we’re still learning and so it was great,” Chloe Bibby said. “She held us accountable.”

The Terps reacted to their coach’s complaints with renewed intensity, outscoring the Gophers by 10 in the second and coasting to a victory. But they know that against a better team, another slow start could prove more costly.

“We can’t start games like that,” Bibby said. “We have a first half like that against a top 10 opponent and, you know, we’re down by 20. We know that and it’s all a learning curve.” 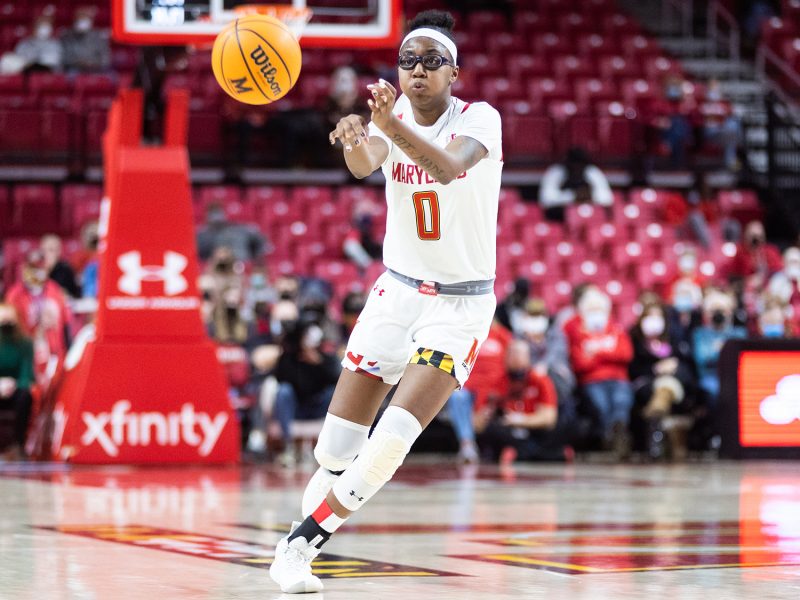