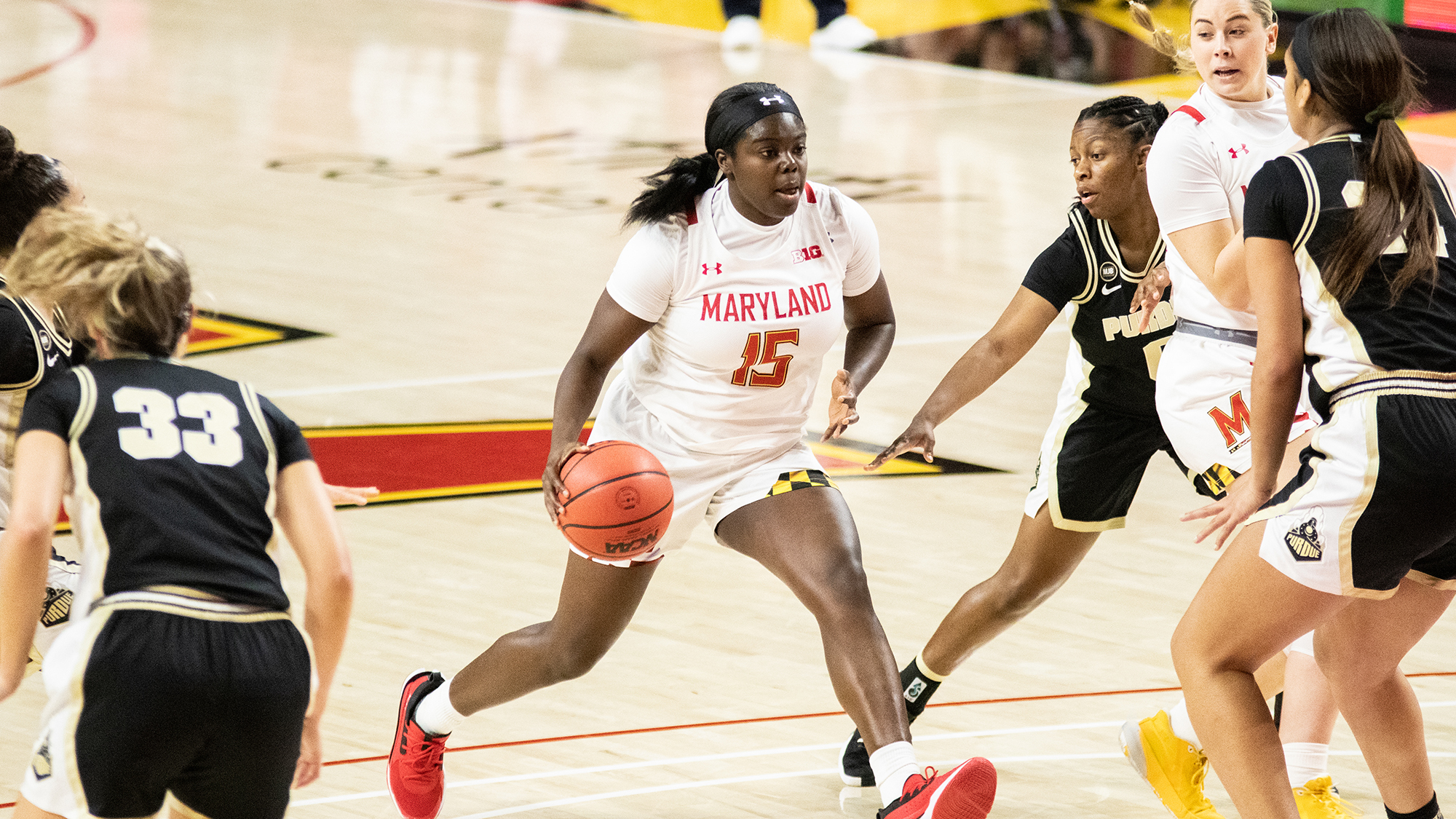 Out of nowhere, the ball was in Ashley Owusu’s hands. The Maryland women’s basketball guard had just started trotting down the court with a few seconds left in the first half after a Chloe Bibby three-pointer, looking to defend Purdue’s desperate inbounds attempt as time wound down.

Instead, Cassidy Hardin flicked an errant pass right to Owusu, who suddenly had an open lane to the hoop. And as the sophomore has done all season, she finished.

The ball dropped through the net as the buzzer sounded, a five-point swing for the Terps to close out a dominant first half and stem a budding charge from the Boilermakers. And No. 12 Maryland coasted from there to the team’s eighth straight win, an 83-46 victory over Purdue Sunday afternoon in College Park.

“That was one of our most complete, 40-minute efforts,” coach Brenda Frese said.

Unlike the Terps’ blazing starts in recent games, Maryland (9-1, 5-0 Big Ten) plodded along early in the contest. The Terps shot just 4-of-12 in the opening 6:30, with buckets courtesy of Owusu and Mimi Collins.

But the Boilermakers could not capitalize on the Terps’ mishaps, clanking shot after shot off the rim and turning the ball over five times in the opening period. That enabled Maryland to stay ahead despite its cold start, and a jumper from Diamond Miller opened the floodgates.

Over the next 10 minutes of game action, the Terps ripped off a 22-8 run, only interrupted by two makes and a handful of free throws from Purdue (5-4, 2-3). Early in the sequence, it was Miller whetting the twine, including a pair of threes. Collins and Owusu each chipped in another bucket, while Bibby and Faith Masonius added depth scoring.

“Our offense wasn’t necessarily 100 percent, but I think we created our offense through our defense,” Owusu said.

Meanwhile, the Boilermakers shot just 4-of-27 from the floor up to that point. They eventually broke out of their funk with a Kayana Traylor layup. She led Purdue with 12 points and three assists on the afternoon.

Two more makes closed Maryland’s lead to 16, and the Boilermakers had life for the first time all game. But Bibby’s late three and the turnover on the ensuing inbound pass led to Owusu’s bucket, squelching any momentum and giving the Terps a 21-point advantage entering the half.

And Maryland kept adding on in the third quarter. A layup from Miller, free throws from Bibby, a jumper from Owusu, and Purdue could not match the effort. Owusu led the Terps in scoring with 19 points, while Miller, Bibby and Katie Benzan also finished in double figures.

“You just find different ways to attack,” Frese said. “It’s not all gonna be from the three-point line every single game.”

With four minutes left in the third quarter, Maryland brought the dagger. A 17-0 run — combined with a nearly five-minute shooting drought for the Boilermakers — put the Terps up 35, their largest lead of the afternoon.

Closing strong had been a point of emphasis for Frese’s squad, which had built big leads in previous conference games, only to watch it slither away and be saved by free throw shooting. A boost from the line was not needed Sunday, as Maryland delivered blow after blow to Purdue.

But the Boilermakers found one bright spot in the fourth quarter courtesy of Karissa McLaughlin. She drained two threes to break the program record from deep, a sterling cap in the senior’s college career.

But that was all for Purdue, which finished shooting just 24.1 percent from the field, the lowest mark the Terps have allowed in a Big Ten game. And as both sides went deep into their bench late in the fourth quarter and the buzzer sounded, Maryland walked off the Xfinity Center floor with its heads high after a dominant performance over a conference foe.

“We’ve kind of taken it personally when players have had career highs on us,” Frese said. “I thought we took it personally defensively today.”