In unlikely debut, Eric Najarian made waves for Maryland football 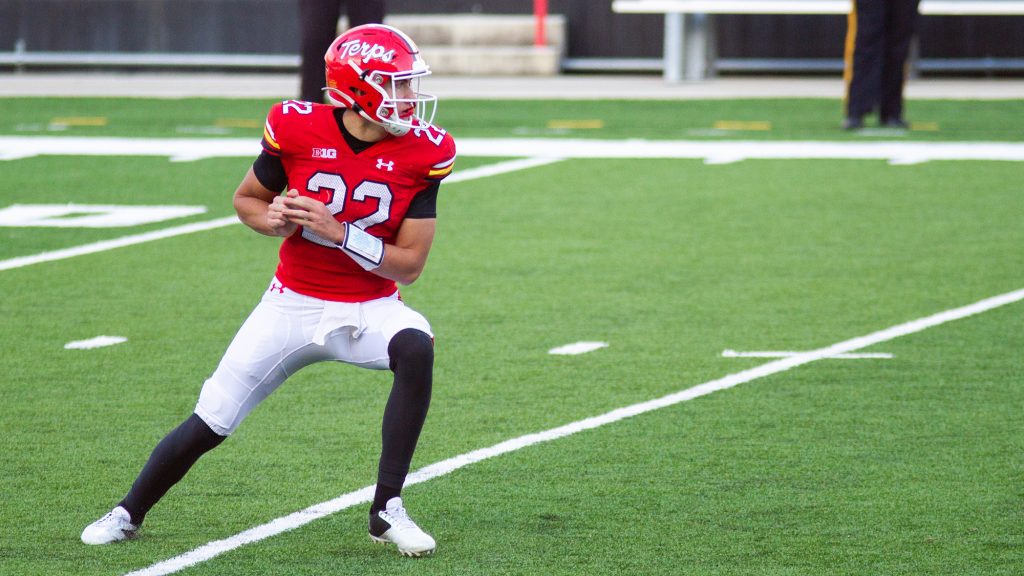 Quarterback Eric Najarian drops back after a handoff during Maryland football’s 27-24 loss to Rutgers on Dec. 12, 2020. (Julia Nikhinson/The Diamondback)

Maryland had almost managed to escape 2020 without quarterback woes. Taulia Tagovailoa had brought stability to the position, impressing with speed, a strong arm and sharp decision-making.

So, given the program’s tainted history, it was only fitting that the last regular season game featured a controversy under center. Tagovailoa was ruled out Friday morning for medical reasons, leading redshirt freshman Lance LeGendre to make his first career start. And when that went poorly, walk-on Eric Najarian stepped up.

It was a big moment for the sophomore, who had never seen game action in college. While he looked shaky on his first two possessions under center, Najarian trusted his preparation and stayed calm.

And he delivered, leading the Terps on a scoring drive at the end of the first half that included three passes that went for at least 10 yards. It was enough to let Maryland hang with Rutgers, and even though the Terps eventually lost in overtime, it was a breakout performance in a pinch for a young signal caller.

“You kind of have to stay ready, so there’s not much time when you get thrown out there to think about what you’re really doing,” Najarian said. “You just kind of go out there and do it.”

The week began as normal for Najarian. He took reps with the second-string offense and as the scout team quarterback, allowing the defense to prepare for the Scarlet Knights’ attack. He did not expect to play, as Tagovailoa had commanded the position since the season opener.

But when Tagovailoa was scratched a day before the game, Najarian was thrust into the backup role behind LeGendre, the only other scholarship quarterback on the roster. Even with the unexpected promotion, it still seemed unlikely Najarian would see meaningful game action.

But then LeGendre struggled. He completed seven passes for 42 yards, threw two interceptions and was sacked twice. And after that second turnover, coach Mike Locksley had seen enough.

“Eric became the guy that gave us the best chance to win,” Locksley said. “He did a great job.”

And as Najarian became more comfortable in the pocket, Maryland’s playbook opened up. His passes became crisper. His decision-making became sharper. His scrambles became more contained.

He took charge, and while he was by no means perfect, Najarian brought some stability to an offense suddenly in need. The Terps trailed three times in the second half, and each time, Najarian led a scoring drive in response to put Maryland back in front.

The last of those was perhaps the most dazzling. He completed three passes of at least 12 yards, the last of which was a 52-yard heave while escaping pressure to Brian Cobbs, who spun out a defender and cruised into the end zone to put the Terps ahead by three with just under six minutes remaining.

“Coach [Locksley] had kind of instilled in me a sense of confidence if it had to come to me,” Najarian said.

And his teammates responded to his performance. A sluggish offense suddenly came to life in the second half, led by running back Jake Funk.

“There was no pressure for him,” Funk said. “He got thrown into the fire, and he responded, and that’s what we could’ve asked.”

Even if the end result stung for Najarian and his teammates, it was a memorable day for the sophomore. And while there’s no guarantee he starts Maryland’s next game against Michigan State, a 218-yard, two touchdown, no turnover performance is sure to give Locksley more assurance in his walk-on.

“It’s cool to get out there finally,” Najarian said, “but at the same time, it’s kind of what you go out and do every day.”