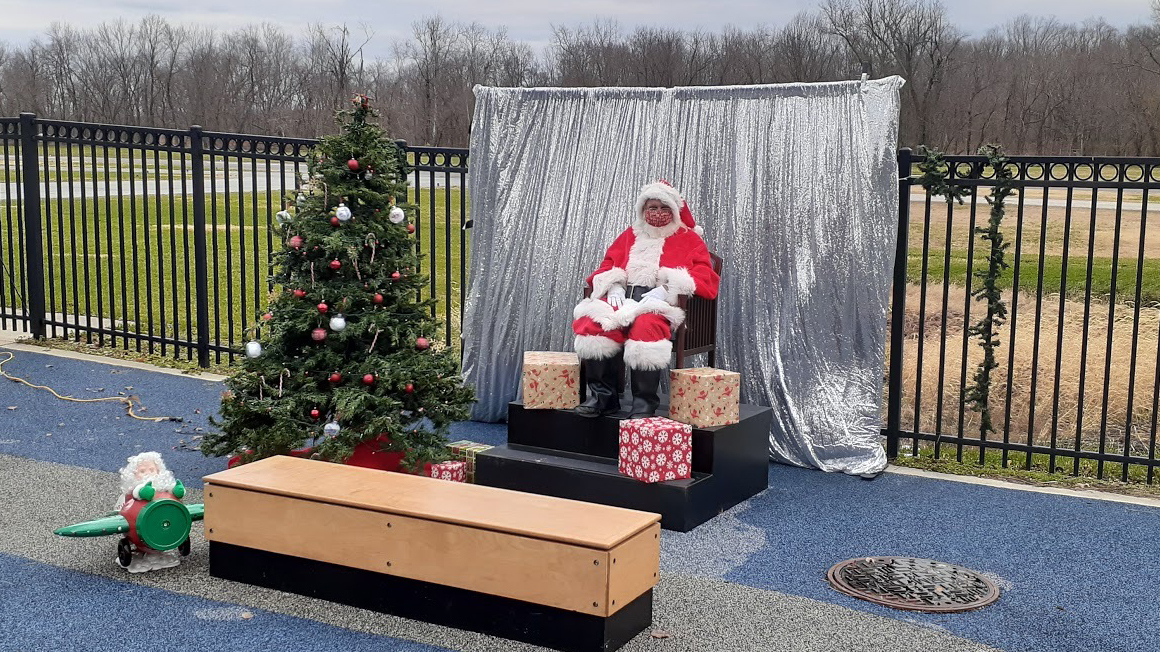 Santa sits for pictures with families outside the College Park Aviation Museum on Saturday, Dec. 5, 2020. (Kenan Grier/For The Diamondback)

By Kenan Grier
For The Diamondback

The holiday season is in full swing in the city of College Park. Lampposts are decorated with wreaths and ribbons along Route 1, and over the weekend, Santa Claus stopped by the city — arriving by plane instead of sleigh.

But due to the coronavirus pandemic, the city tradition looked different this year.

In past years, families would be able to participate in holiday crafts during the event and could view Santa’s plane land from inside the aviation museum, but the building is now closed to the public due to COVID-19 restrictions.

On Saturday, the museum livestreamed footage on Facebook of Santa’s plane touching down at the airport, with Santa waving at a camera as a pilot drove his plane around the airport grounds.

At the start of the fly-in, Santa’s plane departed from the College Park Airport and flew in a loop for 15 minutes before landing back at the airport.

While the fly-in event itself was done virtually, the aviation museum did offer in-person pictures with Santa, which were done outdoors.

Children and parents sat on a bench, placed a few feet in front of a masked Santa. Afterward, the bench was cleaned with a disinfecting wipe.

“We’re excited that they had a safe space for Santa,” Laura Hood, a College Park resident who attended the fly-in with her daughter, said.

Hood said she thought the city did a good job informing attendees about the safety precautions for the event, adding that they “kept it fun” while still enforcing social distancing.

Those who took pictures with Santa had to purchase tickets in advance and have their temperatures checked upon arrival. Each ticket was for a specific time slot to prevent overcrowding, said Daniel Graham, education and outreach coordinator at the College Park Aviation Museum.

Despite changes to the event, all tickets sold out. But, Graham added, due to restrictions, the “numbers that constitute ‘sold out’ are lower than they would typically be for this event.”

After getting a picture with Santa, kids got to take home a craft kit containing a snow globe, candy cane and paper airplane.

“Although the circumstances may not be ideal, we’re really pleased with the turnout and with the event,” Graham said. “So far everyone who’s attended has been really excited that we’re doing anything at the moment, so it’s been really positive — just spreading a bit of holiday cheer.”