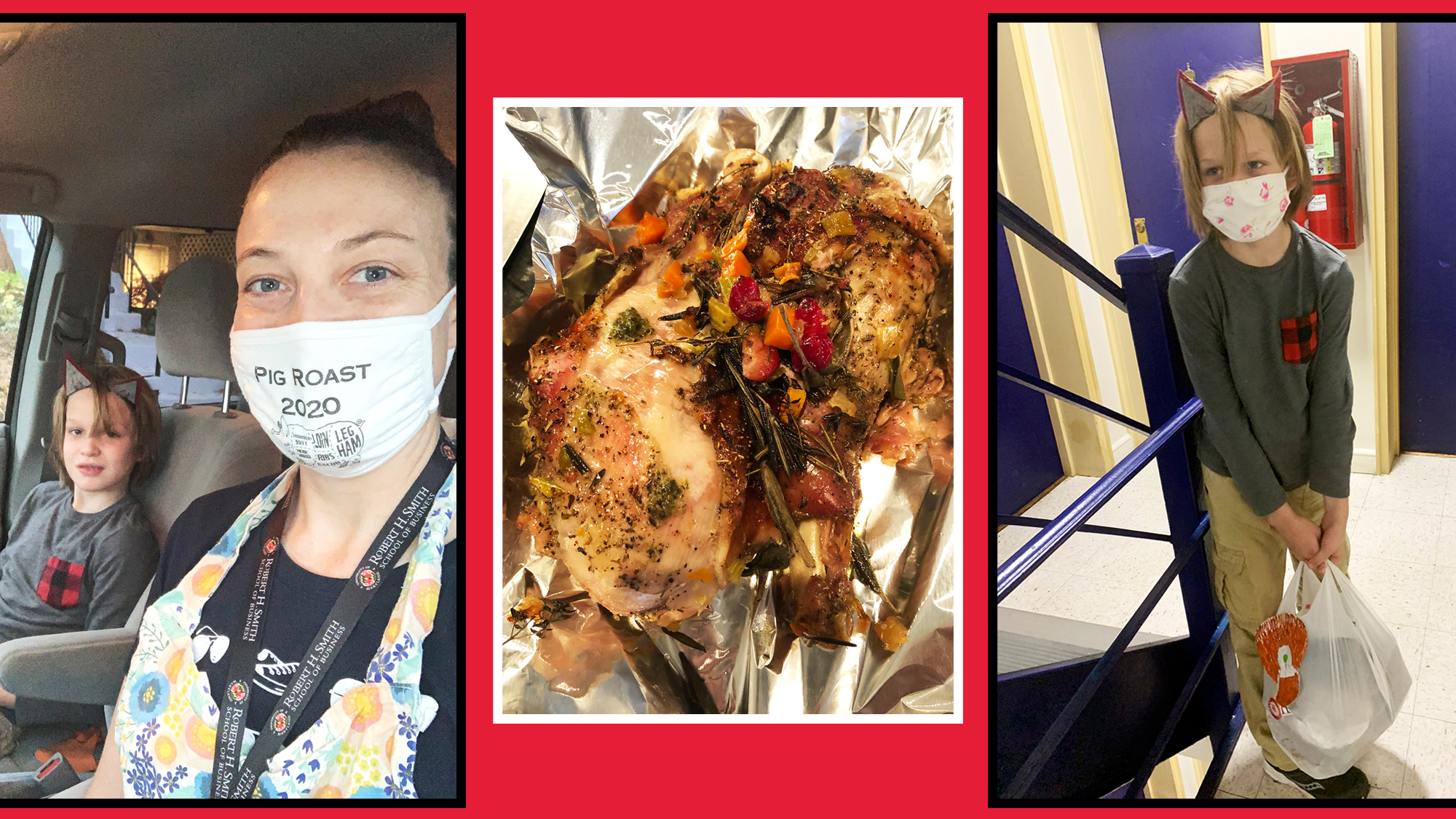 Left to right: Nicole Coomber and her son deliver meals to students on Thanksgiving; the turkey Coomber cooked; Coomber's son holds one of the meals. (Photos courtesy of Nicole Coomber, Graphic by Julia Nikhinson/The Diamondback)

On Thanksgiving Day, Nicole Coomber’s kitchen was bustling with activity.

But the meals she was preparing — turkey and acorn squashes with a side of collard greens, fresh bread, stuffing and Whole Foods pie — did not end up on her Thanksgiving table. Instead, they wound up in apartments across College Park.

As the pandemic kept some University of Maryland students cooped up in their residences and away from family, Coomber offered a free meal to any of her students who stayed in the area over Thanksgiving.

“It was pretty fun,” said Coomber, the assistant dean of the business school’s full-time masters of business administration program. “We want to try to make it a tradition and do it every year.”

The idea came from her husband, who saw a tweet about a professor taking on a similar project. At first, Coomber said, she was nervous about reaching out to all of her students — about 200 undergraduates and 150 students in the program. But her husband reassured her that regardless of how many students took up the offer, it would be a rewarding experience.

When she received confirmation of how many students wanted a meal — about 12 to 15 in total, including some of her students and their roommates — Coomber bought turkey thighs and drumsticks and, for the stuffing, three loaves of bread. The collard greens came from their garden, while her husband baked fresh bread that was distributed in slices.

[College life has been different for UMD freshmen. Now, their holidays will be, too.]

Coomber and her family celebrated their own Thanksgiving on Wednesday, she said, and she spent Thanksgiving Day cooking for the students. Her four young kids occasionally popped in to ask for food, she said.

“There’s not a whole lot going on, especially now, so spending [Thanksgiving] in the kitchen definitely wasn’t the worst thing,” Coomber said.

When Coomber finished the meals, she and her nine-year-old son delivered the food to students in different apartments in College Park, from Graduate Gardens to The Varsity, and one in Greenbelt. Her kids, she said, even made small cards with turkeys and stapled them onto the bags that held the meals.

Coomber texted each student about five minutes before arriving at their apartment, she said. And since all of her classes are virtual this fall, this was the first time she met some of her students.

Varun Goenka, a graduate student studying information systems, was planning to travel to Dallas to see his brother for Thanksgiving. But with the rise in COVID-19 cases nationwide, he decided traveling would be risky and stayed in College Park instead.

Goenka originally planned on preparing something with his roommates, he said, but when he found out about Coomber’s offer, he and his roommates took advantage.

“It was nice meeting her in person for the first time on such a special day,” Goenka said. “The food was pretty amazing.”

[The Original Ledo Restaurant left College Park. Another Ledo franchise is replacing it.]

Neha Mundra, an international graduate student in the business school, moved to College Park from India in 2019. She had only tasted turkey for the first time last year during her first Thanksgiving. She accepted Coomber’s offer so that she could relive the “beautiful” time she had the previous year.

Mundra said she and her roommates chose Coomber’s vegetarian option, with acorn squash instead of turkey. The meals provided them with leftovers for two days, Mundra said.

Mundra especially appreciated the card Coomber’s son had made, she said, which was personalized with Mundra’s name on it.

“I still have the card on my softboard,” Mundra said. “That was really special.”

Involving her kids in the process of helping others was a special part of the experience, Coomber said.

“Not everybody can go home for Thanksgiving, and I just tried to cultivate that gratitude in them,” Coomber said. “It’s really good for the kids to understand how much fun it is to give back and to help other people.”