Phoebe Bridgers and Maggie Rogers just made 2020 a little better 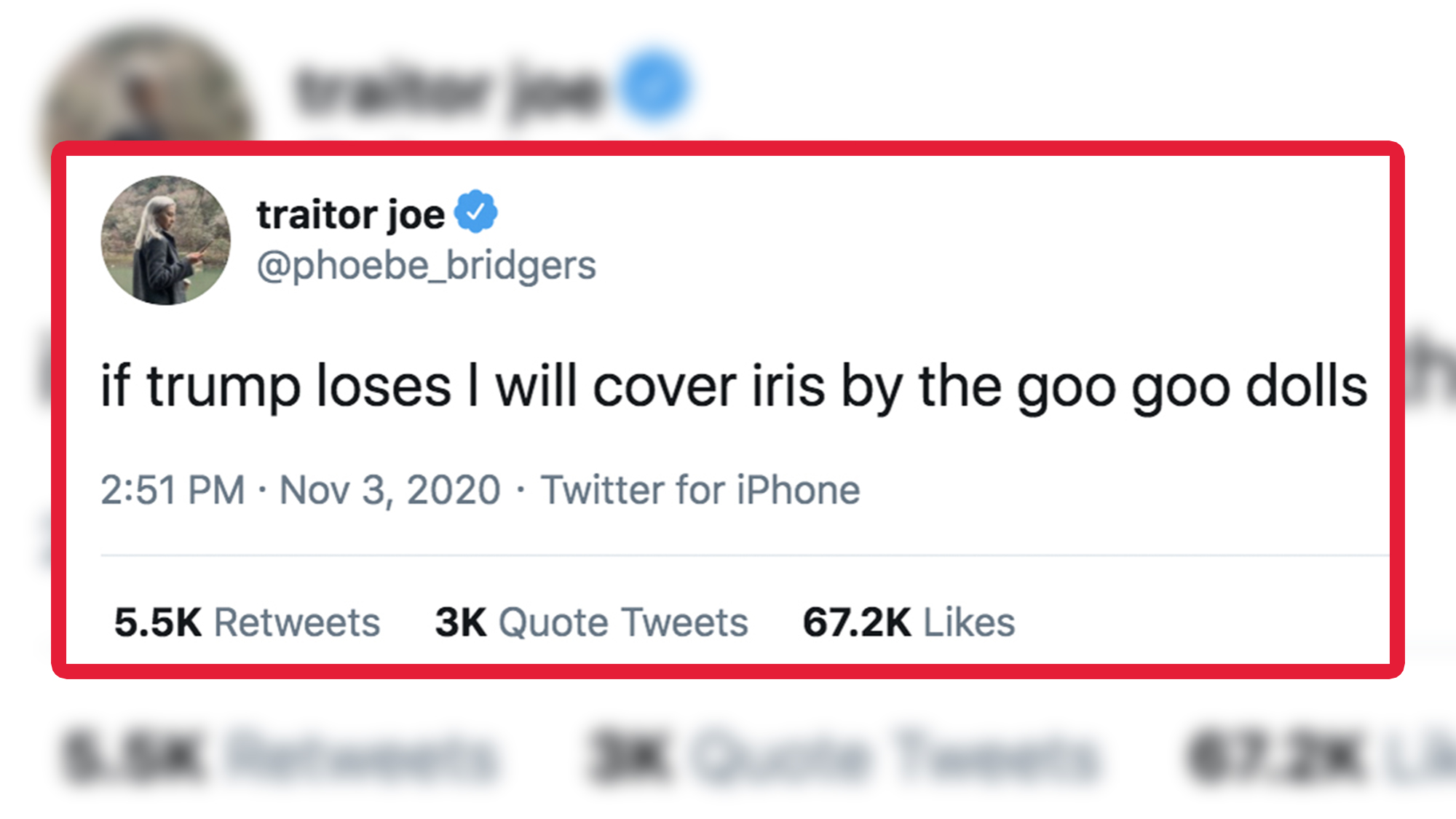 Trump went down and the cover went up. (Graphic by Julia Nikhinson/The Diamondback, screenshot via Twitter)

On Election Day, Phoebe Bridgers, indie musician and the entire internet’s crush, tweeted she would cover “Iris” by the Goo Goo Dolls if President Donald Trump lost the election. She made good on her promise Nov. 13, releasing a heart-wrenching duet on her Bandcamp page with fellow beloved singer-songwriter Maggie Rogers.

When Biden was projected to be president-elect on Nov. 7, fans immediately began leaving comments and memes under Bridgers’ tweet, letting the singer know they had not forgotten her promise. The Goo Goo Dolls even tweeted a gif of Judge Judy pointing to her watch with the caption “We’re waiting…”

[This YouTube channel posted a video every day for a year — just to delete them all.]

Rogers tweeted at Bridgers, asking if she needed harmonies for the cover. Bridgers responded “I’d give up forever to harmonize with you,” playing on the opening lyrics from “Iris.” Fans were enthralled with the idea of the female powerhouses collaborating on a song, leaving comments such as “LEGENDS SUPPORTING LEGENDS” and “my lesbian heart can’t take it.”

The cover was only available on Bandcamp for 24 hours, but listeners could pay whatever amount they wanted to download the song. All proceeds went to Fair Fight, a voter outreach and advocacy group founded by former Georgia House minority leader and 2018 Democratic gubernatorial candidate Stacey Abrams.

Though the idea of the cover was definitely hyped up by fans, the two musicians did not disappoint. “Iris” is one of my favorite songs of all time — I sat through a Goo Goo Dolls concert in the rain my senior year of high school just to see it played live — but Bridgers and Rogers’ rendition definitely gives the original a run for its money.

The song is fully acoustic, featuring only guitar and vocals, but the singers’ melodic voices are more than enough to carry the track. The pair recite the lyrics with so much soul that it’s hard to believe they didn’t write the song themselves. I get chills every time I listen to the chorus’s haunting harmonies, even though I’ve heard the cover about 20 times. Bridgers and Rogers displayed the immense talent they have to offer, and I appreciated every single second.

The artists sold 28,000 copies of the song in the U.S., according to Billboard. It is likely that it will be one of the best-selling songs for the week of Nov. 13 and may even appear on the Billboard Hot 100 chart. Neither artist has had a song on the chart thus far, which shows the huge amount of positive attention the cover has gotten.

Fans responded by frantically tweeting at Bridgers and Rogers to let them know how much they loved the song. Some comments include “phoebe lmaooooo it’s so good i’m sick,” “you make everything all right” and “Not emotionally stable enough for this rn. It is everything.”

Fans are hopeful the cover will be released on Spotify and other music streaming services, as am I. Though I have heard “Iris” about a million times throughout my life, I will be listening to this cover on repeat for the foreseeable future.