This YouTube channel posted a video every day for a year — just to delete them all. 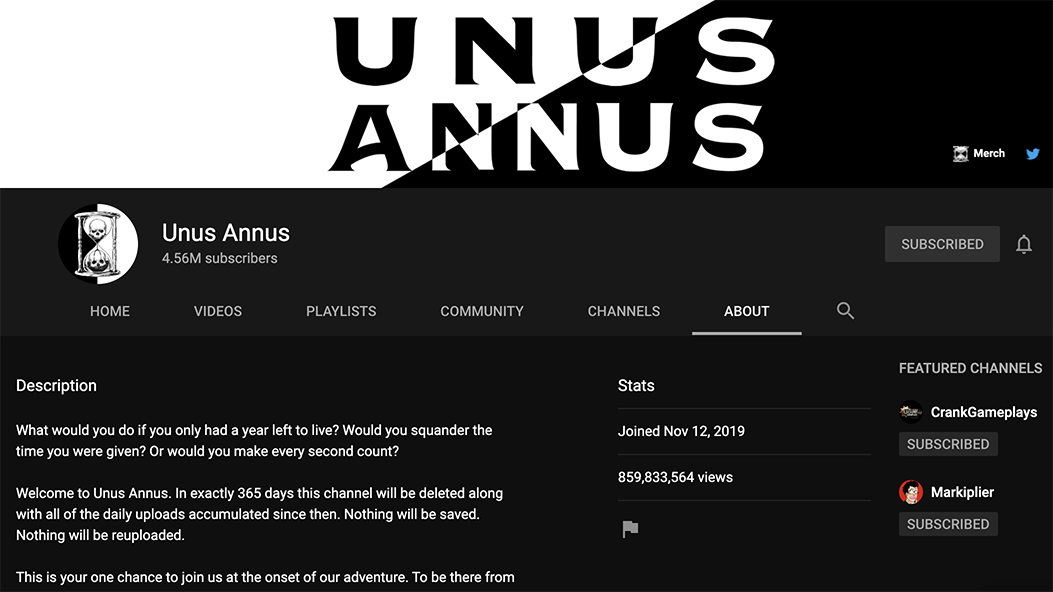 For a long time, I lived my life believing I would always have a second chance. I could meet Woodie Flowers at another robotics event, I could make amends with my family members when I was older, I could watch a movie in the theater another day.

And in the era of the internet, this all seems true. Social media posts go back decades, archives of TV shows and movies can be found online with just a few clicks and technology is slowly allowing us to resurrect the dead.

But the YouTube channel Unus Annus has challenged this idea. Created Nov. 15, 2019 by gaming YouTubers Markiplier (Mark Fischbach) and CrankGameplays (Ethan Nestor-Darling), the two L.A.-based creators made one video a day for a year before the inevitable deletion of the channel. Each of their videos began and ended with a countdown until the end of the channel, and during their year, they lived by two mottos: “What would you do if you knew how much time you had left?” and “Memento Mori,” which roughly translates to “Remember that you must die.”

[‘Pokémon’ has taken over my life]

I tried to watch all of their videos in chronological order over the course of the week before the channel was deleted, and it felt like watching a slow descent into insanity. At the same time, Mark and Ethan were painfully real, something that is few and far between in this era on the internet. They confronted relationship abuse, modern beauty standards, their own failures and so many more difficult topics. At the same time, they voluntarily got pepper-sprayed, got pooped on by goats, drank their own (filtered) pee and went ghost hunting.

The experiences of watching these videos for the first time cannot be recreated, just as the experience of creating each video cannot. During such a dark time in the world, I was given the honor of watching a genuinely supportive and creative relationship develop between two people in real time. I watched two people grow and persevere through a series of weird, hilarious and stupid videos.

It’s easy to question why they would do some of these things. Who asks their friend to tase them for a video? Who continues to watch hypnosis videos on camera even when they are very clearly fetish videos? That’s the magic of Unus Annus. It wasn’t about the videos or the views — it was about making memories and remembering that when we die, nothing comes with us.

Yes, there are loopholes; people could download the videos or repost them, even though Ethan and Mark (also known by their alter egos Unus and Annus), asked fans not to do that. But I wanted to download them so often, though. I wanted to save the videos that make me laugh the hardest or the ones I never got a chance to see. But if I did that, I wouldn’t have understood Unus Annus. I wouldn’t have truly understood that in our world, nothing lasts forever, and there are often no second chances.

We are all running out of time. What will you do with the rest of yours?