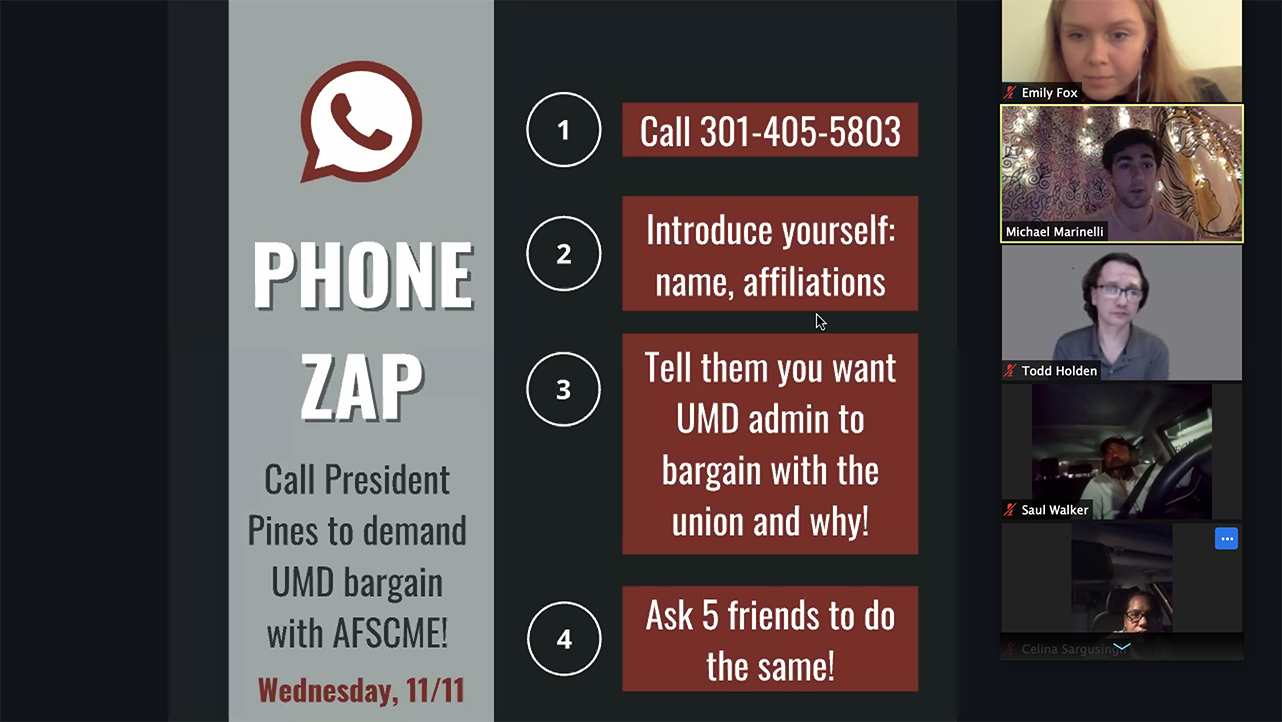 On Wednesday, about 30 students called President Darryll Pines' office asking the university to bargain with the union. (Clara Longo de Freitas/For The Diamondback)

It was around 3 p.m. on Wednesday when Aviah Krupnick called University of Maryland President Darryll Pines’ office.

The call went to voicemail, so she left a message, following a script.

“I’m concerned about the health and safety of campus employees,” the script read.

The message was part of Wednesday’s “phone zap,” organized by the university’s chapter of United Students Against Sweatshops, which aims to fight for workers’ rights. Students called Pines’ office, urging him to bargain with the union that represents the university’s workers about COVID-19 health and safety policies and working conditions amid the pandemic.

Pines’ office staff fielded about 30 calls, many with “scripted concerns” related to collective bargaining, according to a statement sent by a university spokesperson. Coordinated phone calls on a single topic are not uncommon, according to the statement.

Jewel Washington, the university’s assistant vice president for human relations, informed the union Wednesday of the university’s intent to begin collective bargaining negotiations with the union about “successor agreements,” according to the statement. The release of the notification was planned prior to the phone calls.

“The notification offered to begin bargaining with the union earlier than usual this year with the best interests of all parties in mind,” the statement read.


The organization also encouraged students, workers and parents to email Pines after the call and invite five other people to do the same.

“The goal was to fill up the inbox,” said Michael Marinelli, a senior English major and member of this university’s USAS chapter.

The members are optimistic that they were heard, Marinelli said, and they are ready to keep their efforts going. But for now, they will wait to see if Pines will respond, he said — the ball is in Pines’ court, he said.

[UMD union says Trump’s term was rough for labor rights. Under Biden, they have hope.]

The group announced the phone zap at its first town hall on Tuesday, which focused on labor issues and COVID-19. At the town hall, union organizers and university employees had the opportunity to share their experiences on working on the campus during the pandemic, and students asked questions about how they could support workers.

At the town hall, university workers called out the university for a lack of communication and resources and unsafe working conditions. And the COVID-19 pandemic has only exacerbated existing disparities and concerns, said Amanda Dykema, a grant writer for the arts and humanities college. For example, it has highlighted how one’s supervisor heavily impacts their experience as a university employee, Dykema said.

At a first glance, the university seems like a great place to work, Celina Sargusingh, the University Health Center clinic coordinator, said at the town hall.

“But when you dig a little deeper … you’re going to find some disparities that have existed for a very long time,” Sargusingh said.

Krupnick, a junior operations management and business analytics and philosophy, politics and economics major, thought the town hall was a good forum for workers to express their frustrations. A lot of students will go through their four years at this university without knowing what workers go through, Krupnick said.

Some will look at custodial services and jobs and assume they are terrible by default, Krupnick said. But that’s not necessarily the case.

“What makes these jobs bad … is the fact that the people who are working aren’t really afforded dignity,” Krupnick said. “There can be a lot of pride associated with these jobs, and they’re just so important to the way that everything in our world functions.”

During the town hall, Marinelli invited students to take a simple action — reply to a Pines tweet in which he says he prioritizes health and well-being on campus. Within a day of the town hall, the tweet was flooded with replies with one demand: that the university bargain with the union.