Meet The Material Excess: An alt-rock band made up of UMD students 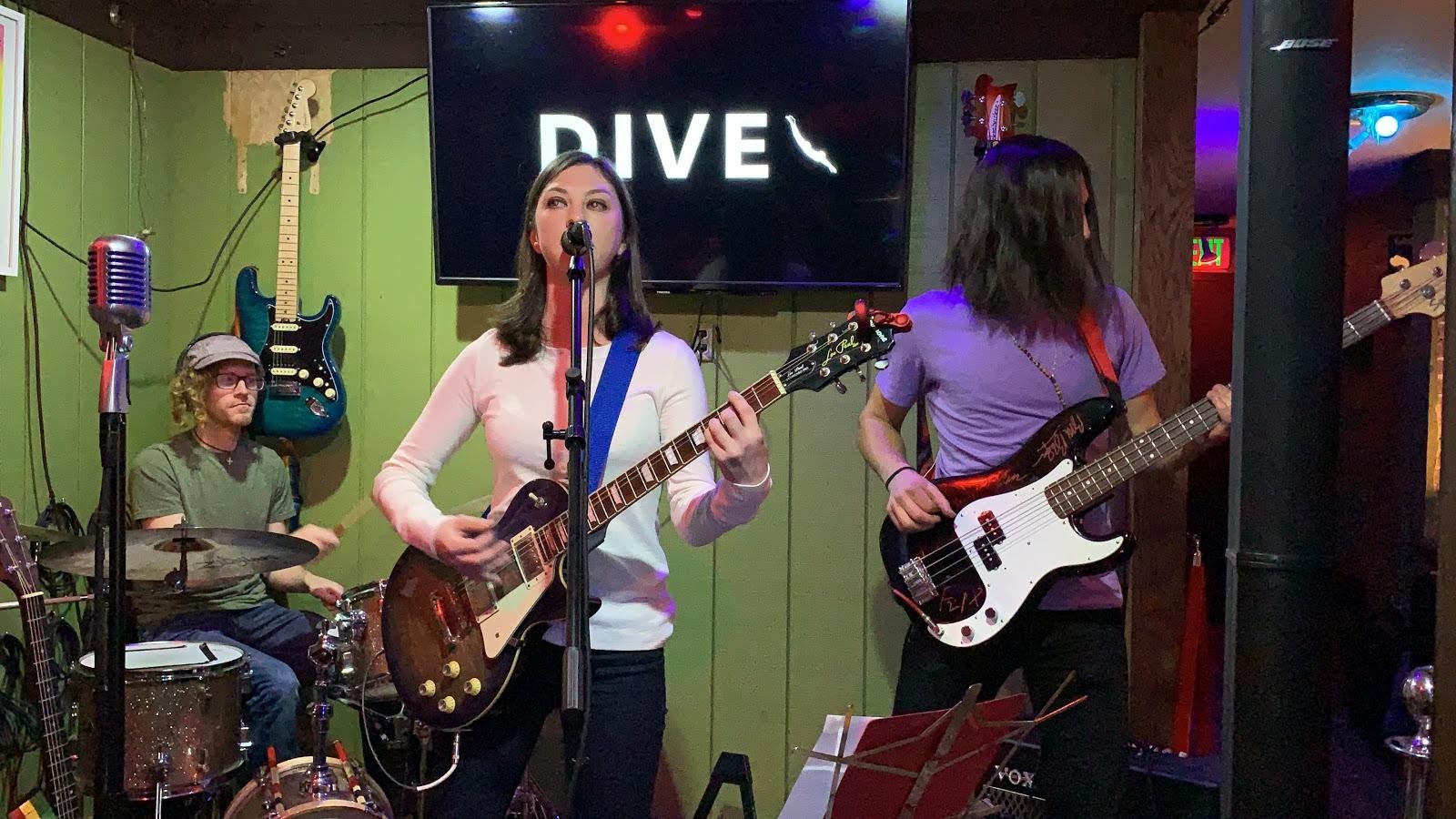 Last fall, when hundreds of University of Maryland community members banded together to protest sexist demonstrators on McKeldin Mall, Aidan Knab was there, playing music with Jammin’ at Maryland to drown out the hateful comments. That’s where they first spotted Riley Chadwick. Later, when Chadwick showed up at a JAM meeting, Knab asked her to start a band with them.

With Knab on guitar and bass and Chadwick, a senior Russian language and literature major, providing vocals and guitar as well, all the two of them needed was a drummer. By chance, Knab, a senior material sciences and engineering major, ran into Brandon Johnson at the University Recreation and Wellness climbing wall.

Johnson, a physics doctoral student, was wearing a sweatshirt with musical notes on it he had gotten from his choir at North Dakota State University. Knab eagerly asked if one of the instruments he played was drums. Luckily, Johnson is a drummer and agreed to join Knab and Chadwick. And thus, their alternative pop and rock band, The Material Excess, was born.

The band released two songs in October. “Borderline,” which was written by Knab, has a hard rock sound to it, and “For Linda,” written by Chadwick, has more of a mellow pop sound.

Now, the band is working on a cover of “Moral Panic” by Nothing But Thieves.

Not surprisingly, Knab said it’s hard to define the genre of music their band plays.

Whatever they write tends to be influenced by what they’ve been listening to, they added.

For “Moral Panic,” Knab said the goal is to get eyes onto the band’s music by covering relevant songs that people might be searching for on YouTube.

Certain challenges arose during the process of recording and releasing these songs, especially after the outbreak of COVID-19. Knab said the band went into hiatus for a while last March when the campus shut down before figuring out how to be productive in quarantine and record the songs.

Before campus shut down, Knab said the band would meet and have weekly rehearsals. Johnson also recalled going to their first open mic night at Cafe Nola in Frederick.

“I think some of our first gigs were some of the best things that have happened,” he said. “I look back at that with fondness.”

Now, getting gigs is no longer much of a possibility, but that didn’t deter the band from recording music. Knab said when a band member writes a song, they practice individually and then Knab either drives to the other members’ houses to record the different elements or they all meet up. Knab then arranges the music on their computer at home.

“We have sort of become each other’s bubble,” Knab said. “I really barely leave my house unless it’s to go record with them.”

The logistics have gotten more complicated though. Knab has to drive 40 minutes just to get to the closest band member. Knab recalled driving to three different locations last weekend just to record all the elements necessary for their upcoming song release.

“Getting people in one place at any given moment to do any of this, where they have the energy and the time to record and have had a time before to become familiar with what they’re going to be recording and all of that is such a difficult process,” Knab said.

Despite these challenges, practicing music during quarantine still had positive impacts for some of the band members.

“I’ve always felt that music is one of the things that keeps me sane,” Knab said.

Knab added that music is not only their source of income right now, but it is also something they focus on and put their energy toward in order to shut other things out, especially while dealing with quarantine and online classes.

“It’s nice to have this one thing that I’m relatively confident that I’m good at and that I’m consistent with, and that doesn’t have these pressures that everything else tends to have,” they said.

During a busy semester for him, Johnson often likes to step away from lesson planning to work on music.

Johnson will also take out his drum pad and start practicing different beats and patterns while he is working or reading. When preparing for the band, Johnson said instead of taking small breaks, he will set aside an hour to practice.

“It’s at once stressful and relieving,” Johnson said. Although the band is a lot of work, the stress he feels is positive stress, he said.

Knab said most of the elements including the drums, bass and guitar for “Moral Panic” were all recorded last Sunday. Knab said Johnson and Chadwick are going to record the vocals sometime this week. The hope is the song will be released this weekend alongside a video of the band playing it, but Knab said the plans were tentative.

For Knab, however, even if managing a band during quarantine, online school or the state of the world becomes too much pressure, they still rely on music as something positive to focus on.

“I don’t want to call it an escape because it’s not really that,” they said. “It’s something to put my energy towards that makes me feel productive and capable.”