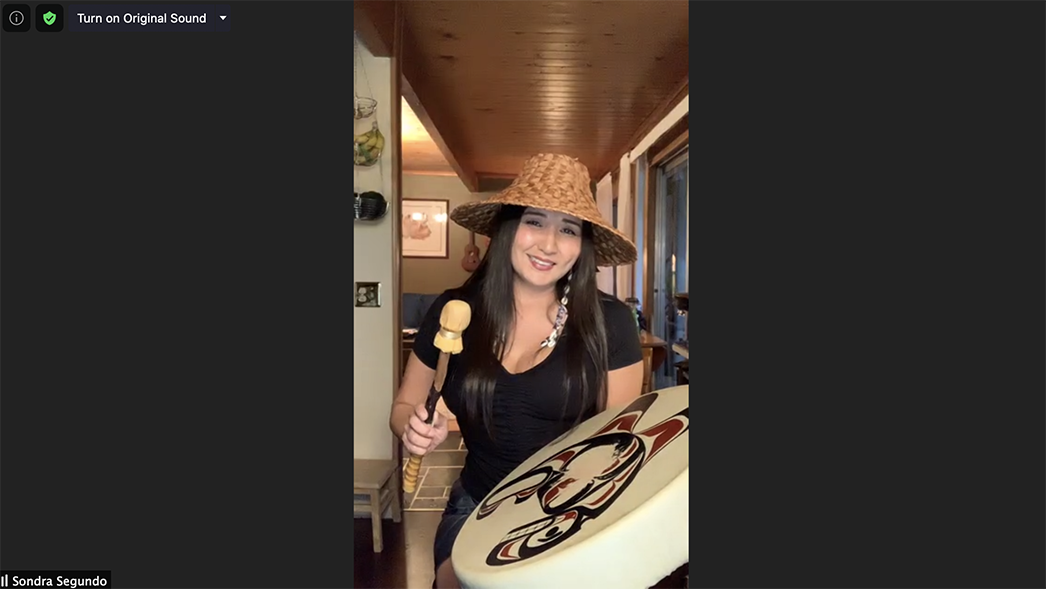 Sondra Segundo performs during the webinar on Nov. 10, 2020. (Gabrielle Lewis/For The Diamondback)

When Sondra Segundo was growing up in Seattle, she never got to learn about the Haida — her family’s tribe from Alaska — in school. She’d see one paragraph about her tribe, with the rest of the textbook centered on European history.

Eventually, she began learning about their history through her elders, such as her grandmother — and it changed her life.

“We talk about all that the Indigenous went through in this land,” Segundo said. “But when you learn about it and you’re from that culture, it just does something to your heart and soul.”

Segundo was the featured speaker during a webinar, “Recognizing Indigenous History in the U.S.,” held Tuesday night by the University of Maryland’s chapter of Hermandad de Sigma Iota Alpha, Inc.

During the webinar, Segundo, an author, artist and musician, sang songs in the Haida language and spoke about Haida history, her family members and other people in her tribe.

Elisabeth Ramos, a senior early childhood and early childhood special education major and the president of Hermandad de Sigma Iota Alpha, Inc., said the main goal of the event was to provide Segundo with a space to share her experiences as an Indigenous woman.

“Ultimately, that was the point of this event, for you to have the space to share your story the way you want to share it,” Ramos said to Segundo during the event. “The colonizers, the way that they share your story — that’s not it.”

When Segundo began learning about the history of Indigenous people and her tribe, she realized she came from a “long line of matriarchs.” The Haida are part of a matriarchal society where children take on their mother’s clan or crest, Segundo said.

“I wanted to … incorporate our culture, our style of storytelling,” Segundo said. “It really got on my nerves that all the Indigenous books about Indigenous people were written by Europeans. That’s just not right, and they were getting it wrong.”

Segundo also spoke about how the Haida were forced to assimilate into Western culture in order to receive necessities in their village, such as schools and a post office. Her elders had to sign documents saying they’d relinquish their culture and their language.

Segundo started the Haida Roots Language and Youth Arts Program in her community, where Seattle-based Haida can practice traditional art forms. Recently, she’s been working with Seattle schools to create an assessment that would be used in Haida language classes.

Christian Gomez, a junior business administration and communication studies major at Northeastern University, is a member of the Tlingit tribe, and his Tlingit name is Kaat’aawu.

He said other tribes from Alaska have stories similar to Segundo’s, and he appreciated her emphasis on reclaiming those cultures and making sure they don’t disappear.

“She talked about the importance of learning language, which I think is one of the most basic … and most important issues within a lot of Native cultures,” Gomez said. “All the revitalization starts with the language.”

Segundo said the way she dismantles racist systems as an Indigenous person is through what she creates: her books, her music and the program she created in Seattle.

“If we continue in the colonizer teachings, then … we would get sick,” Segundo said. “We lose who we are.”