Now that Biden won, it’s time to get to work 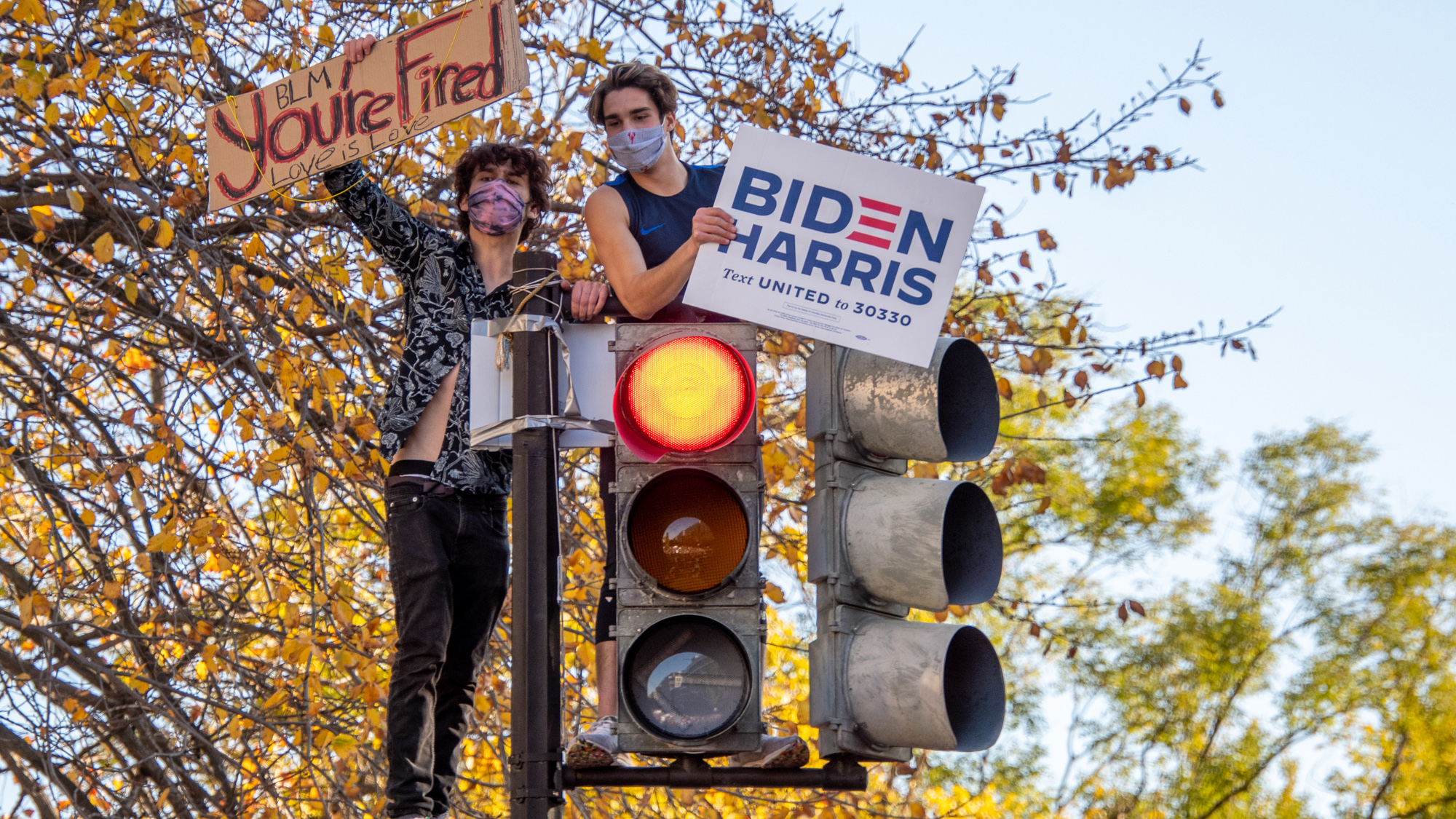 People celebrate from the top of a stoplight in Black Lives Matter Plaza after Joe Biden was projected to become the next president of the United States on Nov. 7, 2020. (Joe Ryan/The Diamondback)

It’s a strange feeling to know you are living in a moment that will be a focal point in history. For the better part of this past week, the world held its collective breath as the next president of the United States was decided. When the race was finally called Saturday morning, cities across the country erupted in celebration. Like many people that find themselves lucky enough to live in close proximity to our nation’s capital, I decided to go downtown with a few friends and join in. I didn’t entirely know what was going to happen; I’ve been to my fair share of protests and for some reason, I half-expected this particular gathering to get a little bit heated. Needless to say, it was a bit different than I anticipated.

We pulled up to McPherson Square and were immediately greeted by the sight of thousands of people milling around — some carried cases of the ubiquitous Natty Boh, a few double-fisted mimosas. So, I came to the conclusion that our only course of action was to immediately head to the nearest liquor store and make our way to the White House.

The celebration in front of the White House felt like the fall of the Berlin Wall mixed with a Super Bowl parade in Philadelphia. There was dancing, singing, drinking, chanting and laughing. A few of the more athletically inclined revelers scaled traffic lights and launched beer cans and champagne foam into the crowd gathered below.

After a few hours, we emerged, smelling of sweat and booze and smoke, from the mass of gathered people. I was tired and ready to grab some shawarma and head home, but something caught my eye on the way out.

In the middle of Black Lives Matter Plaza, there stood a comparatively minuscule group of radical, mostly Black protesters, clearly not so enthused about the party going on around them. The juxtaposition in the ideological make-ups of the crowds were quite stark: The sober, exasperated demonstrators tried to make their calls of “Black Lives Matter!!” stand out while the drunk, jubilant masses hollered “U.S.A.!!!”

I couldn’t help but feel a twinge of shame for allowing myself to celebrate the victory of a geriatric neoliberal while marginalized individuals expressed their frustrations with a system that has given them so little. One side congregated in celebration, and the other rallied out of necessity.

It felt good to revel in the downfall of an authoritarian, but it’s clear that his defeat is only a small step in the march for progress. Joe Biden may represent a return to “normalcy” for the more affluent, bourgeois crowd, but “normal” isn’t good enough for millions of people. “Normal” won’t protect vulnerable communities from state violence. “Normal” won’t end the vicious cycle of militarism and imperialism. It won’t save the planet from a climate catastrophe, and it won’t provide an adequate welfare system to ensure the well-being of all people.

The only way our country will get better is if we aren’t afraid of doing things differently than before. We need to push for significant progress and for real action, and we need to do it now. We can’t simply rely on politicians to make the necessary changes for us — only substantial political pressure from mass movements will push them to act in the best interest of the most marginalized.

It’s vital for all of us, regardless of the communities that we belong to, to support grassroots movements pushing for massive overhaul in policing, our broken health care system, our destructive foreign policy or any number of our countless social ills. And it’s important that we all strive to foster a meaningful sense of community and mutual responsibility for one another through any and every avenue at our disposal.

All that to say, we all deserved a day to celebrate. Joy is the best weapon that we have. But now that the party is over, it’s time to get to work.