Review: ‘The Queen’s Gambit’ is a gorgeous look at femininity, addiction and the 1950s 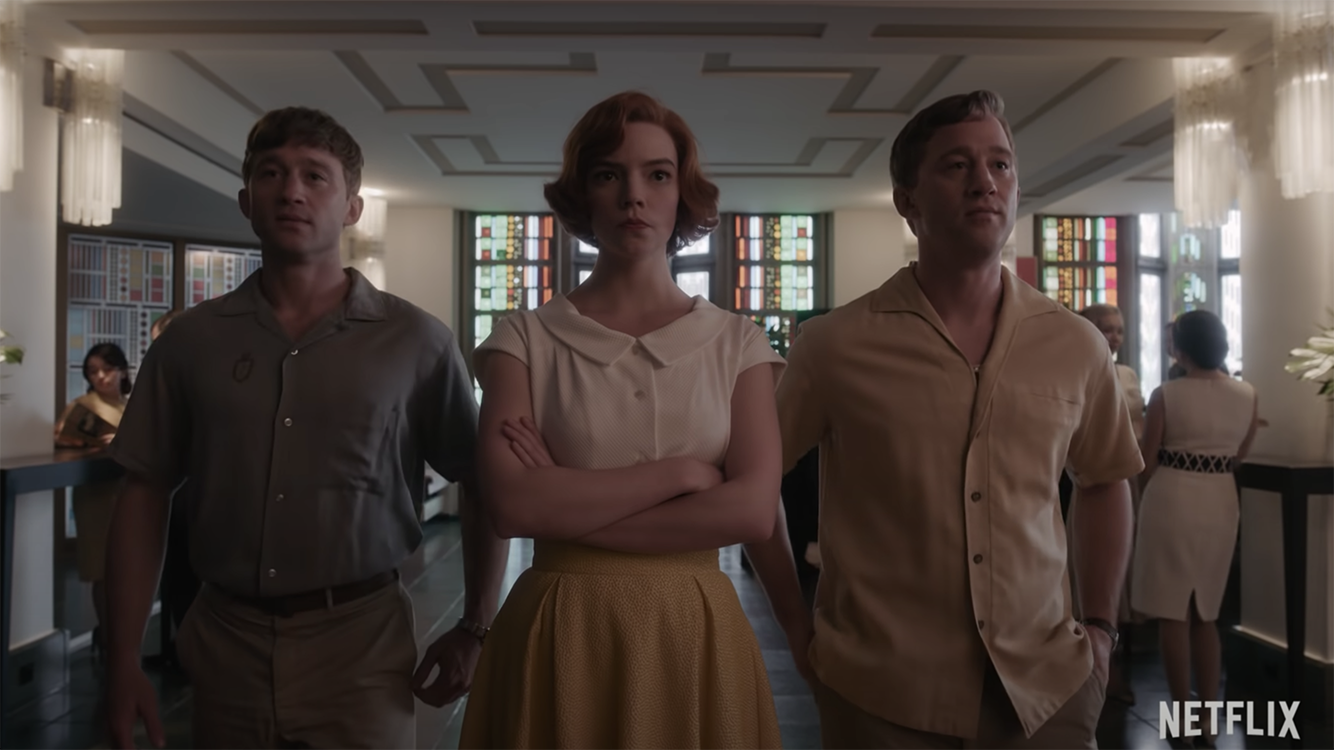 The seven-episode limited series is available on Netflix.(Screenshot via YouTube)

I’m usually not drawn to the clickbait that is Netflix’s rotating home screen, but as an Anya Taylor-Joy fan, I couldn’t help but be intrigued by the eerie, vintage atmosphere that The Queen’s Gambit‘s previews showcased. And once I started the show, I couldn’t stop.

In the show, orphan Elizabeth “Beth” Harmon is a chess prodigy living during the Cold War. Beth battles to become the greatest chess player in the world while also brushing off the inevitability of her eventual decline. The seven-episode limited series on Netflix features the talented Taylor-Joy from M. Night Shyamalan’s Split and Thomas Brodie-Sangster from the Maze Runner trilogy.

Beth’s life is tragic and heartbreaking, and all you want is for something good to happen to her. Unfortunately, she remains intent on self-sabotage and careens into unhealthy coping mechanisms instead of dealing with her ever-present mommy issues. Every episode is poignant and true to the judgmental and restrictive expectations of the era.

That’s all I can say about the show without spoiling anything, so if you haven’t watched it yet, return to this review later!

When I watched the pilot, I was immediately thrown by the realization that the timeline works backward in this series. Director Scott Frank first places us at the end of Beth’s journey, then peppers in different parts of her early life. One constant is Beth’s orphanage, where I half-expected something from American Horror Story: Asylum to pop up. Alas, the only horror Beth faces are flashbacks to her deceased mother and an early introduction to tranquilizers. The backstory of how Beth became orphaned continues throughout the series, projecting themes of abandonment and mental instability onto her life.

[WMUC releases its first zine since 1996]

The first episode moved slowly, revealing the biggest flaw of the entire show: the ridiculous amount of time spent panning over Taylor-Joy’s blank face, as if that could show us what she was thinking. It’s easy to say she’s just thinking about chess throughout these scenes. The show also had an absurd number of chess shots, and though I appreciated their efforts, it got repetitive. I will have to give props on accessibility; the chess world is pretentious, and the show made me feel like I still could comprehend the game even as the strategy became more complicated.

Perhaps the focus on her face and other drawn-out scenes of Beth walking or sitting are meant to show the emptiness she feels. It seems this was accomplished early on in the show and became overdone by the fourth episode. I can’t help but feel we could’ve used those precious, limited-series seconds toward building more depth for her character.

The takes on femininity and sexuality in this show are also incredibly tactful. Beth’s life seemed vastly more progressive than that of the average girl living in the 1950s. Due to her shocking intelligence, she’s thrown into the adult world far too soon, and it shows in her impulsive actions. The forbidden nature of boys taunts her, and she can’t help but give in to the temptation while still believing that chess is her only purpose in life.

Beth drowns out her teen angst with alcohol and emotionless experimentation, always keeping herself at arm’s length from anything that requires feelings after not one, but two absent fathers. When her adoptive mother dies, it only gets worse, and the bad role models in her life allow her to justify the anesthetizing of her emotions.

[After eight seasons, ‘Below Deck’ still reels in viewers]

There’s an arch of overcoming the powerlessness associated with being female at the time. Whether it’s out of carelessness or anger, Beth’s distaste for how men in the chess world treat her is obvious. She has some great one-liners for the press when they belittle her or claim she’s special just because of her gender.

The souped-up cars, patterned head scarves and bright cinematography brought each scene together. We’re taken through the late 20th century in undergarments alone, starting with full-coverage brassieres until finally we see a lacy black bra that gives us a glimpse into modernity. This was perhaps a period piece above all, offering light glimpses into the sexism, racism and anti-communism prevalent in this era.

However, there’s still a fight Beth can’t seem to win. Losing to her greatest competitor, Vasily Borgov, after a careless, hangover-inducing night is perhaps her lowest point. The show comes full circle with poise, bringing us back to the first scene of the series in episode six. Beth finds her entire identity in her perfect gameplay, and when that shatters, her personal life crashes down around her. It’s heart-wrenching to watch as her addiction gets the best of her, especially when she’s already been made aware of her issue. Death after death plagues her life, and you can’t help but feel that her bad decisions are justified.

The ending seemed to come together a bit too easily for me, but at the same time, I needed Beth to get her happy ending. Her childhood best friend returns to remind her of the meaning of family, the love of her life shows up at her biggest competition in Russia after years of silence and, of course, she beats her mortal chess enemy.

I loved The Queen’s Gambit for the complex struggle it shows with femininity and power. Beth doesn’t diminish how intelligent she is for anybody. She has depth and darkness, and while some of that is a product of her times, there’s a certain level of strife she carries in her blood. It’s a story of redemption that reminds us that despite loss after loss, we can still win.