College Park families say Halloween brings the community together, even in a pandemic 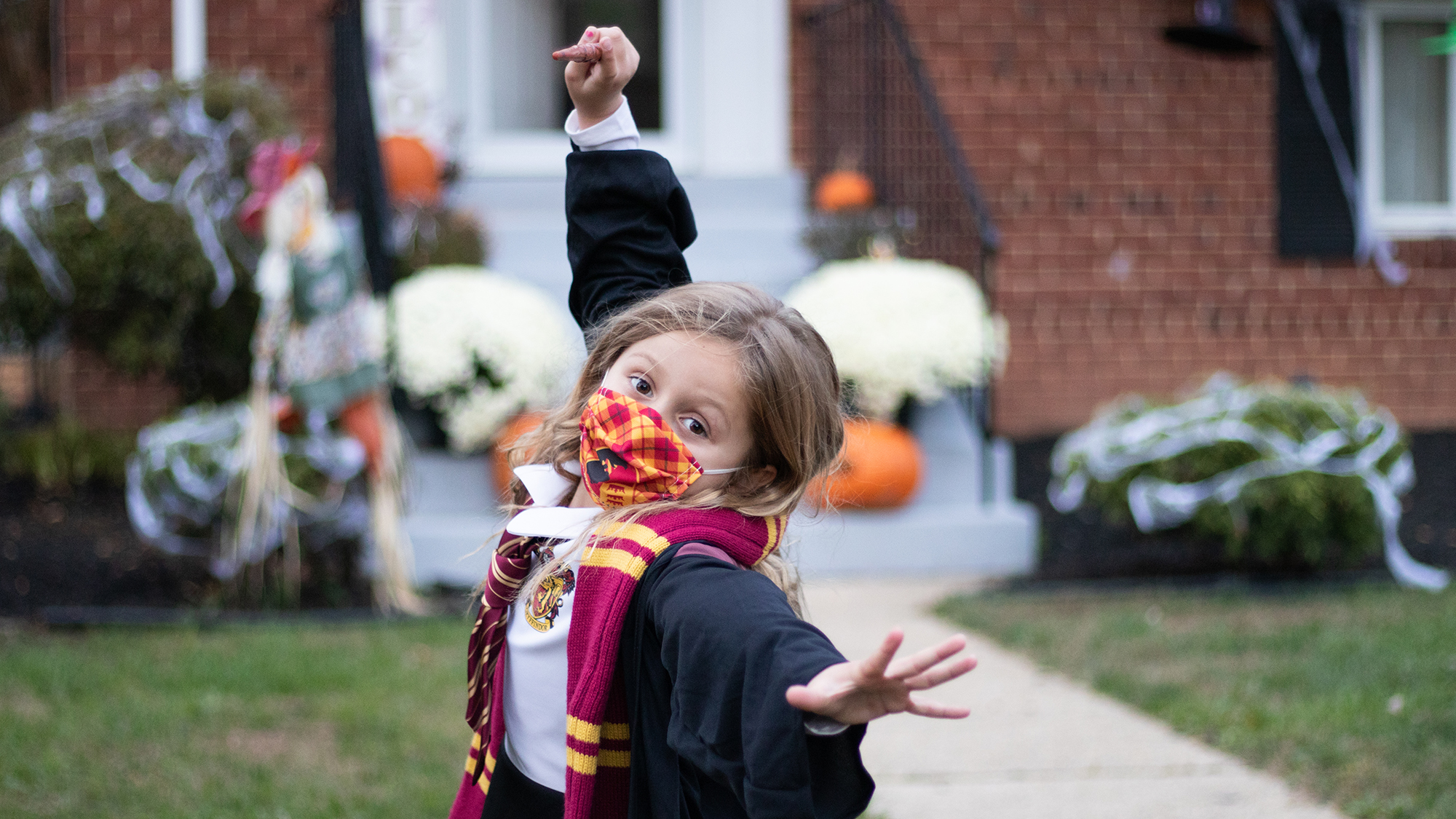 Kristin Jayd and Rich MacKenzie have always taken Halloween rather seriously. So, despite being in an untried neighborhood during a pandemic, the College Park newcomers decided to put a socially distanced spin on their October tradition.

Pumpkins of various sizes overtook their entire front yard, with headstones sprouting up in between. And in this “haunted pumpkin patch,” as they called it, a homemade zip line dispensed candy, hand sanitizer and — for the adults — locally brewed craft beer.

“We actually had a pretty fantastic Halloween turnout,” said Jayd, a graduate student at the University of Maryland. “We knew other people were going to be looking for some candy, and we wanted to deliver some candy, and so it worked out.”

During a Halloween season unlike any other, families in College Park explored creative alternatives — ranging from zip lines and scavenger hunts to citywide events — to celebrate the holiday amid a persisting pandemic.

In mid-October, Prince George’s County officials advised against traditional door-to-door trick-or-treating, instead encouraging one-way drive-thru activities and scavenger hunts. The county additionally banned indoor haunted houses, since events such as those could lead to an increased transmission of the coronavirus.

College Park resident Taryn Webb has a five-year-old daughter and wanted to find a way to let her dress up as Hermione Granger to trick or treat this year. After communicating with neighbors online, she organized a map of households in her neighborhood that would be interested in distributing candy safely.

For Jayd and MacKenzie — whose house was included on Webb’s map — the evening was spent sitting around the firepit in their front yard and chatting with neighbors. Trick-or-treaters would stop by to fetch their candy, while other passersby would come grab a beer from the zip line.

The idea for the zip line, which was hooked to a fishing pole, came from a video that recently went viral. But with their fog machine and yard decorations, Jayd and MacKenzie gave the contraption a unique twist.

“It looks really spooky through the fog machine and the lights,” MacKenzie said. “It’s like a dancing demon skull.”

For other families in the area, small get-togethers provided a safe alternative to trick-or-treating. Mirieth Valenciano Marin said she and her neighbors in the Hyattsville Arts District organized a small event in their courtyard so their kids could dress up and get candy.

Though her four-year-old son loves trick-or-treating, Marin said he understood why Halloween was different this year after living through the pandemic for several months now.

“He has enjoyed, in the past, going door-to-door … he loves that, he’s a social butterfly,” Marin said. “But there has been a lot of training already since March.”

The city of College Park additionally hosted its own event, where kids dressed in their costumes while parents drove through the Duvall Field and received bags of candy. District 1 council member Kate Kennedy wrote in an email that the event was sold-out, with over 960 sign-ups.

Kennedy added that the event was especially important for the younger kids who wanted to go trick-or-treating.

“I think it was important for me that we provide something particularly for the younger kids,” Kennedy said. “Right now everybody’s stuck at home, and these kids have nothing to do.”

Tracy Morrison Sweet, a University Park resident who is temporarily living in Baltimore, said she and her sister’s kids would be doing a scavenger hunt for Halloween this year. She said she planned on hiding candy outside and perhaps even giving them clues to solve, all while avoiding trick-or-treaters so that her kids don’t see them.

Her 8-year-old and 10-year-old — who dressed as a bat and a Steelers player, respectively — were mostly unfazed by the changes this year, Sweet said. They’ve already experienced so many upheavals due to the pandemic that Halloween just became another strange event, she added.

“They were kind of nonplussed,” Sweet said. “So it’s just like one more thing for them that’s different.”

However, for parents and children alike, the creativity that went into celebrating Halloween this year made the holiday extra special. Jayd said many of her neighbors, who also sat in their front yards for the night, told her that they enjoyed themselves more this year than on previous Halloweens.

“I think people are more excited about having it be a community activity, and honestly that’s why it’s my favorite holiday,” Jayd said. “Halloween only happens if your whole community is involved.”