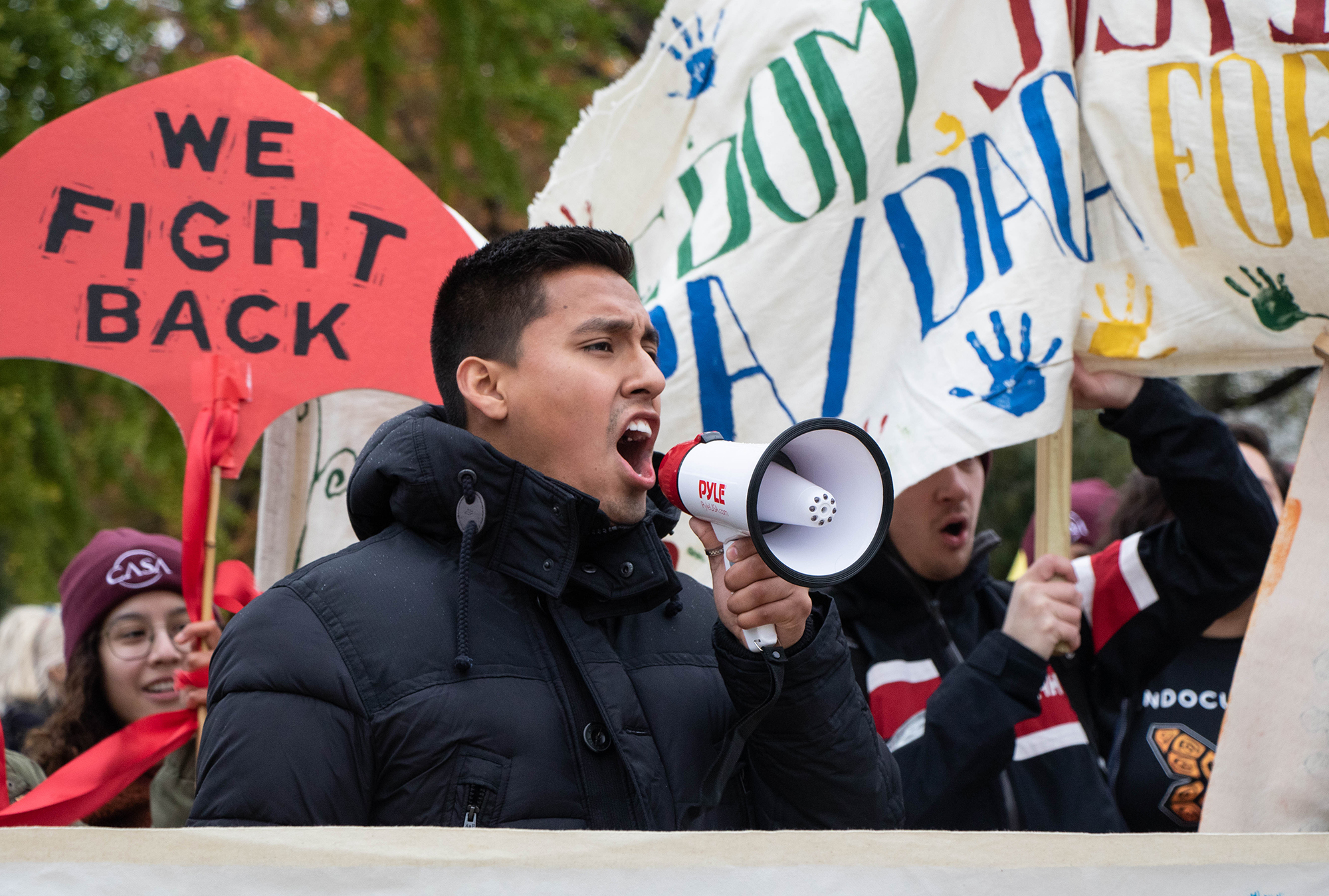 Latinx Student Union vice president Jesus Herrera chants as fellow students and members of CASA walk to the protest in front of the U.S. Supreme Court in Washington, D.C. The court heard arguments regarding DACA on Nov. 12, 2019. (Julia Nikhinson/The Diamondback)

From Sept. 15 to Oct. 15, the term “Latinx” glares at me throughout my on-campus apartment building. The University of Maryland insists on celebrating Latinx Heritage Month without much consideration of how people with a Latin American background actually choose to identify. The term makes me sad and angry — it represents another anglicism of my native language and a feeble attempt at gender inclusivity.

There are many issues with the term. The first that comes to mind is its pronunciation. “Latinx” is not even pronounceable in Spanish. Ask a native Latin American who lives in Latin America to pronounce it, and you will probably get something along the lines of “Latinh” or “Latinj,” as the “x” sound in Spanish makes a sound more similar to an “h” in English. Think of “México” or “Oaxaca” or “Texas.” Why would you put an “x” at the end of a Spanish word if it makes no linguistic sense in the Spanish language?

Next is the fact that America is obsessed with labeling things, and “Latinx” is just another attempt at categorizing a group of people who are so frustratingly difficult to categorize. First there was Latino, then there was Hispanic, then there was Latino again. Latin Americans can speak Spanish, Portuguese and French. They are Indigenous, Black, Asian, white and mixed. Their irritating diversity poses an issue for American bureaucracy, which is so obsessed with labeling minorities.

The term originated in the mid-2000s among activist circles in the United States as a further attempt at creating a gender-inclusive variation of Latino/a. I am all for gender inclusivity, but changing the grammatical structure of a language that predates English by a couple hundred years is a superficial attempt at tackling the deeply rooted issue of sexism and the discrimination of gender minorities.

The argument is that “Latinx” is a more inclusive form of “Latino” or “Latina.” Scholars and activists argue these gendered identity labels impose a binary and do not leave room for individuals who do not identify as either male or female.

But in the context of the Spanish language, “Latino” is both a masculine and gender-neutral word. When politicians seek the “Latino vote,” they are not solely looking for the vote of Latin American men — they want the vote of all Latinos.

Spanish is not the only gendered language, yet activists pay particularly close attention to the way Latin Americans identify themselves in the U.S. Take, for example, the French and the Spanish. People from France are “Français,” and people from Spain are “Españoles.” Both of these are masculine words, yet I have yet to see activists making the case for either to be called “Françx” or “Españx.”

We must make a stronger effort to increase gender inclusivity and end the discrimination of gender minorities. This means stepping away from superficial fixes like changing the way an entire group of people identifies themselves. If scholars truly want to make the Latino community more gender-inclusive, they must start by looking at the structures that allow sexism and discrimination to prevail — not just among Latinos, but across the world.

Putting so much attention on changing an identity label detracts from actual efforts at ending discrimination and increasing gender inclusivity. We must prioritize equity while also allowing people to identify themselves as who they truly are. Most Latin Americans do not primarily identify as Latino. If you ask a Latin American what they identify as, they will proudly tell you their country of origin or national heritage.

I am a loud and proud Guatemalan, and if you must label me, I am a Latina. The term “Latinx” does not encompass all that it means to be a Guatemalan or a Mexican or a Colombian or any other part of the extremely diverse region that is Latin America.

Gender inclusivity and the word “Latino” are not mutually exclusive. The word itself does not discriminate against people — it’s the cultural, political and social structures that allow for discrimination to exist in the first place that are the true oppressors of marginalized groups.