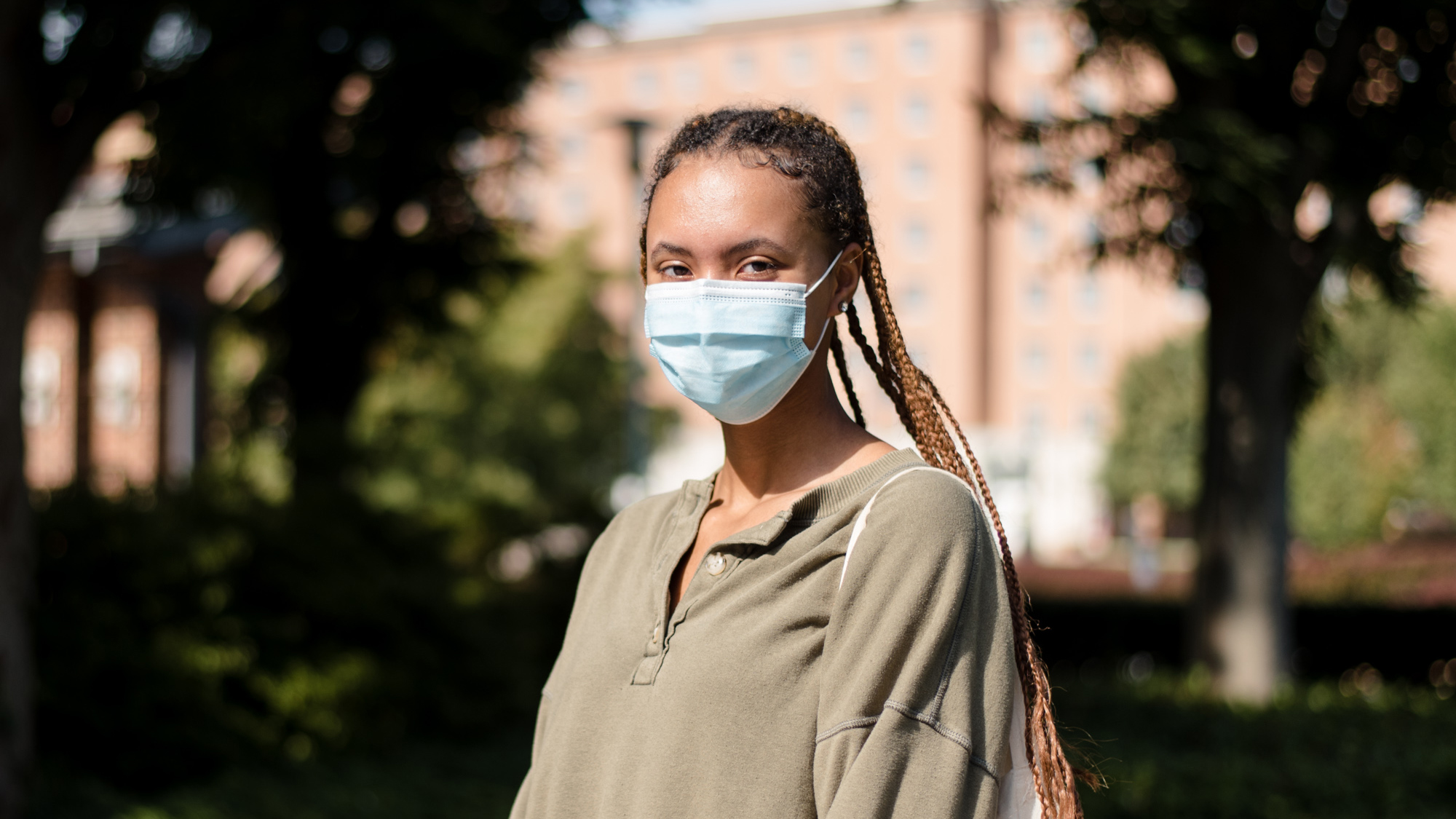 When Omar Eaton-Martínez was applying to the University of Maryland in the 1990s, he didn’t dissect his identity so that it fit within one of the boxes listed on the application.

Instead, when he came to a question asking for his race, he checked “other” and wrote “Black Puerto Rican.”

But when he arrived on the campus, it felt like the university picked a box for him. While his Black friends would get messages from the Black Student Union, he would receive messages from Hispanic organizations, which mainly seemed like they were for newly immigrated Latin American students.

“I was like, what is that about?” said Eaton-Martínez, now a doctoral student in the department of American studies.

People who are Afro-Latino are often put in a position where they are asked to negotiate their identities or explain their background to those who may struggle to understand, said Nancy Raquel Mirabal, director of the U.S. Latina/o studies program in this university’s American studies department. The U.S. has a certain definition of Blackness that isn’t very expansive, she said: If you’re Black and you speak Spanish, some may be confused.

Meanwhile, anti-Blackness and colorism still abound in some corners of the Latino community, which Mirabal says can be traced back to the effects of slavery — effects that have been internalized generation after generation. These ideas proclaim that being of European descent is ideal, whereas Blackness and having Indigenous heritage is not.

At this university, those among the Afro-Latino community have faced microaggressions and cultural interrogations. Some have felt like they have to prove themselves each time they speak Spanish.

But as they’ve grown older, many have also grown into their identities, seeking out knowledge about their heritage and finding comfort and pride in their cultural traditions.

Here are their stories.

Eaton-Martínez remembers how his childhood friends would like to tell others that he was Puerto Rican. It came as a surprise to people that he was both Black and Spanish-speaking.

“People read me and looked at me as African American because of the way that I look,” he said.

His parents emigrated from Puerto Rico in the late 1960s. His father found a Puerto Rican community in his new job at Goddard Space Flight Center, and his mother could still speak Spanish during her work as a teacher at a bilingual school.

Every summer, Eaton-Martínez and his family would go to Puerto Rico to visit his extended family. He learned more about his culture, sightseeing across the island, playing basketball with his cousins and having picnics in the grassy area on El Morro, a historic citadel in San Juan.

At home, Eaton-Martínez’s parents would mostly speak Spanish, while he and his sister would often respond in English, even though they could have answered in Spanish.

“The four walls of my house was Puerto Rico, but as soon as I left the door, it was Silver Spring,” he said.

But he also resonated with his Blackness, he said, and as an undergraduate at this university in the 1990s, Eaton-Martínez joined an organization where Black men would spread awareness about the Black experience to the campus and surrounding communities. When the Supreme Court struck down a Black-only scholarship after a non-Black Latin American student challenged it, saying it was discriminatory, Eaton-Martínez was among the students who protested.

It was during these academic years that he began to see his identity through an academic lens, he said. In 1996, when he graduated from the university with a bachelor’s degree in African American studies, Eaton-Martínez was required to work on a senior thesis.

The topic he chose? The Black self-concept in the Puerto Rican community — or, what’s more commonly known today as Afro-Puerto Rican studies.

“That was really the first formal adventure for me to go out and really make meaning of my identity outside of the experience that my family provided for me,” he said.

She won’t say anything about her identity until somebody asks her, for example, how she speaks Spanish. Only then she will tell them she is Puerto Rican and Cuban — or, Afro-Latina.

“Anti-Blackness is a big thing in the Latino community. So, sometimes, you just want to feel people out without them knowing that you are Latino and see how they are,” said Coleman, a sophomore enrolled in letters and sciences.

When she does explain her identity, Coleman says, she realizes how complex it can be for others to understand, even though for her it isn’t. Her Blackness is her race, while her latinidad is her cultural background. But for some, it might seem as if she is trying to not be Black, or that she’s not claiming to be Latina.

So she usually caters to her audience. Sometimes she’ll bring up statistics, like how Cuba has a significant Black population, or she’ll compare her background to people in Africa. Someone from Nigeria, she said, doesn’t necessarily look like someone from South Africa or Ethiopia. The color of one’s skin doesn’t have anything to do with their culture.

To avoid any confusion, Coleman says many Afro-Latino people prefer to surround themselves with Black peers. It can be easier that way.

“Black people just come in so many different shades that they understand a little better,” she explained.

She learns the history of Black Cubans and Puerto Ricans, studying the way their language and culture has been shaped by those of Nigeria. Her grandmother would tell Coleman the origins of cultural customs and practices that the Afro-Latino community still carries today, like fufu, a food common in West and Central Africa, and fufu de platano, a traditionally Peruvian dish.

But her two cultural backgrounds are more alike than different, Coleman said.

In the winter, her mother’s side of the family usually gets together to celebrate Christmas, where they may eat arroz con gandules or pasteles while some Latin music plays in the background. In the summer, her father’s family reunites for the July 4 weekend, where she would listen to pop, R&B, jazz or old-school hip-hop. But the celebrations don’t feel too different.

“The sense of family and family values and making sure everyone comes together every year — it’s very similar in both African American culture and Latino culture,” Coleman said. “It makes sure that everyone is checking up on one another.”

Merengue and bachata soundtracks dating back to the ’80s echo through the walls. On Sundays, the smell of the mangú — a dish consisting of mashed plantains, salami and fried eggs — takes over the kitchen, which has a little shrine for saints.

And on a Friday evening, Brianna Laurencio, a senior criminology and criminal justice major, looks at the big Dominican flag she has in her room, hanging bright with its red and blue squares.

But Laurencio still faces microaggressions from those who subtly question her identity as an Afro-Latina. It often feels like she is going through some sort of initiation when she explains her background, she said. Some will be surprised that there are Black people in the Dominican Republic. Others will say Laurencio doesn’t look Latina — or, when they hear her speaking Spanish, that she doesn’t look Mexican.

“Whoever said I was Mexican? I’m Dominican,” she would say.

When she was growing up, Laurencio wouldn’t say she was Black — instead, she’d say she was Dominican. It wasn’t until her senior year of high school, going into her freshman year of college, that she came to terms with her ties to Afro-Latinidad: the shared culture of those who identify as Latino and have some level of African ancestry.

Before then, Laurencio felt as if she were stuck in between two communities, and didn’t feel “enough” in either one.

“I felt like I wasn’t accepted in both groups, so I was always sort of in the middle,” she said.

Laurencio was working toward a Spanish minor when she transferred to the University of Maryland from Montgomery College. As a Dominican American, she placed into SPAN306 — a Spanish class for those who grew up speaking the language at home.

But in the class, she felt as if there was only one right way to speak Spanish. The way heritage speakers vary in accent and terminology by region was ignored. Her Dominican vocabulary and pronunciation would be seen as errors, and she’d be marked down for points, Laurencio said.

“Which really made me kind of mad, because that’s the colonizer Spanish,” Laurencio said. “They shouldn’t correct me on the way I speak Spanish because they don’t think it’s proper enough. I feel like Spanish is universal … there are many different ways to speak it, just like there are many ways to speak English.”

When Nancy Vera arrived at this university as a new doctoral student, she identified as Mexican American.

But after four years of studying comparative literature, folklore and the effects of the African slave trade in Mexico, that has changed. Now, she thinks of herself as Afro-Mexican.

That identity, Vera said, is one that’s defined as being of African descent, even if you don’t look like you are. During the three centuries of colonialism in Mexico, many Africans didn’t have the luxury of marrying who they wanted. Instead, they were forced into marriages or raped, or forced to have children with white men.

“Reclaiming my Afro-Mexican heritage — it’s also claiming, whether my ancestors procreated with Indigenous people, or Spanish people, that lineage is still part of me, even though it’s no longer visible,” she said.

As part of her research, Vera explores the literature of Costa Chica, an area along the southern coast of the state of Guerrero, Mexico. That’s where the heart of Afro-Mexican culture is, she said — and also where her mother is from.

More specifically, Vera studies how Afro-Mexican folktales can trace back to West African storytelling traditions and history, something the official Mexican history tries to erase, she said.

She remembers growing up and not seeing Black actors in telenovelas, unless they were playing butlers and servants or villains. When she studied Mexican history, her teacher would say that Mexicans were the descendants of Spanish and Indigenous people. But when Vera would look at herself in the mirror, she wouldn’t feel like she was descended from either people, she said, even though she has Indigenous features.

But when she went back to visit Costa Chica with her mother, and she saw others with skin that looked like hers, she felt at home.

When Vera told her mother that she was interested in researching Costa Chica, her mother didn’t really understand why. Her hometown didn’t used to be something she was particularly proud of. People would ask her if she was “costeña” — from the coast — which carried the connotation of being from the poor part of the region, Vera said.

“Now, she will be like ‘I’m proudly a costeña. And by the way, my daughter is doing this research on the Mexican coast,’” Vera said.

When your people have been colonized, you might feel like there’s nothing you can possibly contribute to the world, or that you could never produce work that people would be interested in reading, Vera said.

But when she shows her mother the Costa Chica literature she’s studying, the poetry collections from her community, her mother is astonished.

“She’ll say, ‘Oh my God, people in my community wrote this? This is amazing.’”