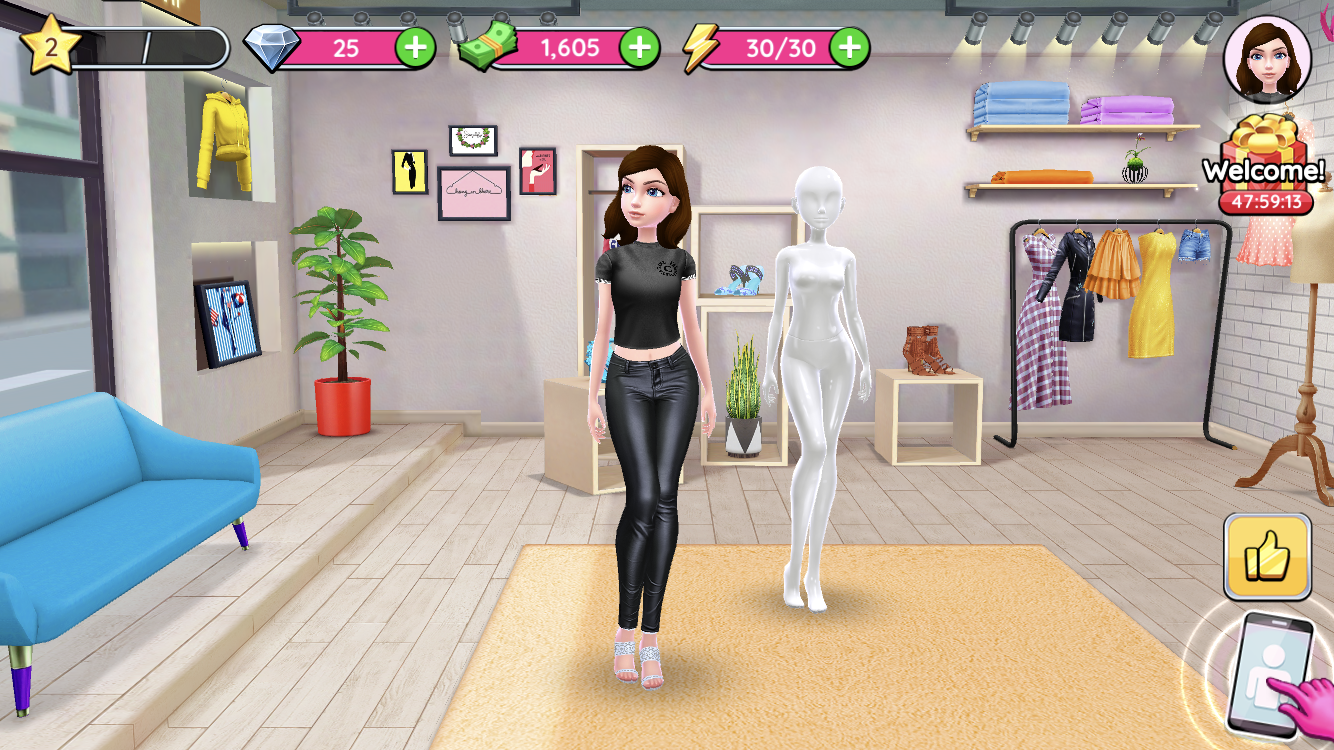 In June, I was hit by a sudden and obtrusive craving: I missed getting dressed. Desperately.

Experts advise that even when you have nothing to do all day but attend virtual meetings, you should still get dressed as usual. Getting ready, they say, is a mood booster and an essential factor of a healthy routine. But everyone who has ever liked fashion knows getting dressed isn’t just about being clothed — it’s about being seen.

Unfortunately, it’s hard to strut your stuff into a gauzy webcam. After my bout of fashion hunger pangs, I was willing to try anything to regain the old mojo — including virtual gameplay.

I posted a message on my Instagram, requesting recommendations for apps which would allow me to “put little outfits on avatars and give them fun hairstyles.” Responses to my experiment varied. I did receive one “sis… is everything ok,” but I breezily ignored it in the spirit of the investigation. The answer arrived as a DM from my childhood best friend, who told me to check out a site called “GirlsGoGames.”

GirlsGoGames is a massive repository of online games, presumably aimed at young girls (and nostalgic adults experiencing cabin fever). The website is lined in Pepto Bismol pink, so sweet it might induce a toothache. A grid of brightly hued applications stretch across the homepage. Their names include such cheeky titles as Sery Haute Couture: Dolly Dress Up and such strangely specific ones as Bad Teeth Makeover. On the pink bar at the top of the page, a category tab reads “Dress Up.”

I clicked on the tab and set to work finding the perfect game through which to vicariously live my girly dress-up life.

The road to dress-up nirvana was rockier than expected. In one game (which has since tragically disappeared into the GirlsGoGames ether; I cannot remember its name), I, an amateur model and aspiring socialite, was approached on the street by a man in a teal suit who claimed to be a “super model photographer.” After this initial scouting, the man, whose name may or may not have been Sven, whisked me off to a fitting location. There, he instructed me to pick a garment for our “photo session.”

Ooh, this is where it gets fun, I thought, and surveyed the clothing in front of me, already formulating an elaborate look in my head. But before I could pick, Sven interrupted my reverie with a speech bubble. “Buy the black dress for the photo shooting,” he said, hands tucked nonchalantly into his trouser pockets. Wishing Sven would leave me alone, I dutifully selected the black dress.

“Try on the black dress that you just bought,” Sven commanded. Pushy much? I put it on, but couldn’t help thinking that it wouldn’t have been my first choice.

“Wow, what a look!” Sven said approvingly. “Welcome to my studio. Shall we start with the shooting?”

I eyed Sven in his rumpled suit and analog camera, his crooked little smirk. What game were we playing, me and Sven? What would he have done if I hadn’t selected the black dress? What would he do now if I didn’t pose for the camera? What would he say if I refused to play?

Goodbye Sven. I clicked the back button and continued to search.

It occurred to me that GirlsGoGames hadn’t given me what I needed, so I closed the tab and ventured to the world of apps. I downloaded Super Stylist from the Apple app store and flopped into bed, eager to become the promised “Fabulous Fashion Girl” I had always dreamed of being. I selected the features for my avatar, hewing as close to my own appearance as the settings allowed, and waited patiently for my walk-in closet.

Instead, I was deposited into an empty store. My point of view swivelled to reveal a woman named Nicki wearing a polka-dot shirt and high-waisted shorts. She blinked at me with giant, expectant eyes.

I surveyed my surroundings. The store was alright in a sort of Ann Taylor Loft way. But where were my clothes?

I tapped on the screen, and the game pivoted back to me.

“It’s only missing one thing,” my avatar said. “Customers.”

“You got your first client right here,” Nicki said. “I’m dying for a new dress. Maybe something very femme in red?”

There was no command to spit at Nicki. I wanted something femme in red. Maybe I just had to stick out the first few months here — it was hard being an independent business owner.

“Style her,” yelled the fluorescent green button at the corner of my screen. I pressed it.

A page of garments materialized on the right, but only a single, polka-dot red dress was available to select. Of course— more polka dots. Nicki was so predictable. This app wasn’t going to work.

I went back to the app store.

Fashion Superstar Dress Up is a dress-up app that requires no cash-in to get to the clothes. There are no capitalist hoops to jump through, nor any cagey besuited photographers or expectant clients. You just flip through page after page of clothing and accessories to dress up your avatar. You can give your avatar the face of myriad celebrities such as Robert Pattinson or Emily Ratajkowski, or you can choose your own features by scrolling through a ticker of hand-drawn mascara-laden eyes. The darkest skin tone available is a pallid nutmeg.

I took to Fashion Superstar Dress Up quickly and with gusto. It reminded me of the paper dolls I played with as a child, their little appendages creased from me and my sister roughly handling them (the website title actually reads “Dress up Games and Paperdolls”).

The app’s clothing selection was far more extensive than that of “Super Stylist” or Sven’s supermodel city. By the end of the day, I was fervently swiping through 129 pages of tiny virtual dresses, a fog seeping over my brain that recalled the retail-induced blackouts I distantly remembered from the in-person shopping days.

I realized somewhere between the second and third day of Superstar obsession (I had begun to make little models of all my friends, cataloguing them in a folder on my phone titled “Avatars”) that despite having this massive wardrobe at my literal fingertips, I felt unsatisfied and at odds with my own body. I had become the cliche of virtual wealth, my material excess a completely separate creature from my happiness. I didn’t want the clothes anymore— but I also didn’t want the little black dress, or the empty storefront. I didn’t want any of it.

And for once, I could opt out.

Dress-up games are not for adults or real fashionistas. But at least you get to choose when you shut down the world.