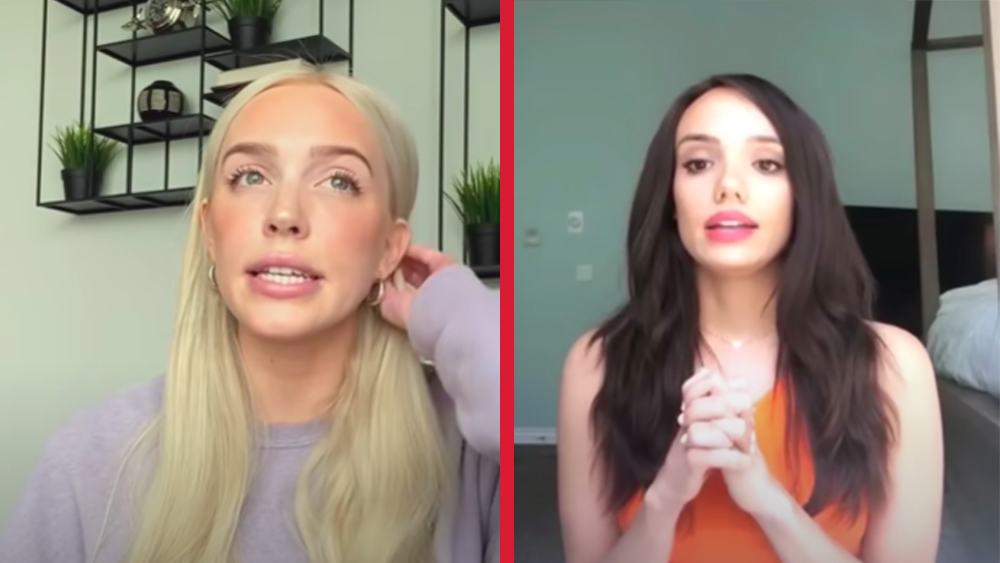 I’ll admit it — I feel bad for Sofia Franklyn.

Twitter blows up over the slightest hint of any conflict, but the magnitude of the attacks on Franklyn for leaving the Call Her Daddy podcast felt unprecedented. Months ago, she ended her relationship with Alex Cooper, her former friend and Call Her Daddy co-host. Cooper and Barstool Sports President Dave Portnoy went on a “smear campaign” after she decided to leave the company, Franklyn said on her new podcast, Sofia with an F.

Months later, it’s pointless to rehash the detailed dysfunction between the women and their very public fight with Barstool surrounding their contract. Both women seem eager to move forward in their careers. After the blowup in May, Cooper continued to record Call Her Daddy at Barstool, and Franklyn went silent.

Last week, Franklyn finally launched her new podcast through her own company, Sloot Media. Her first episode, “Sloot: A Short Autobiography,” added some much-needed balance to a narrative that has largely been driven by Call Her Daddy episodes and a borderline-obsessive amount of Instagram posts from Portnoy.

“I have spared you bitches,” she said in her first episode’s intro.

After hearing Franklyn’s response, it’s still hard to separate fact from fiction. Both sides have pulled out text messages and alleged proof of the other’s wrongdoings. They have also laid out their sides with an impressive amount of respect since the initial uproar.

I’m not a loyal member of the “Daddy Gang” — the name Franklyn and Cooper dubbed their listeners — but I still respect both women. They may not be working together anymore, but they remain huge female forces in the media. I am rooting for both of them, and you should be, too.

Franklyn finally responded to Cooper’s claims that Cooper did most of the work for the show and was getting paid unfairly. In her episode, Franklyn says that she was the reason they produced funny original content and Cooper was unable to perform without reading from a script.

Franklyn basically admits that she didn’t contribute to editing the show, yet she stands her ground about being as important to the show’s success as her former friend. This is a huge deal.

She knows her worth and refuses to apologize for it. It’s irrelevant whether you agree with her that being the entertainment is more important than being the editor. What’s crucial is that Franklyn admits to walking away from a situation she felt was hurting her. That’s easier said than done for a lot of women in media — or any career field.

At the beginning of the episode, Franklyn asks her listeners whether they would have destroyed her — and her former host — for trying to remedy a bad business deal if they were men. It was known inside and outside Barstool that the Call Her Daddy girls were getting severely underpaid. Franklyn asks whether critics would call a man “greedy” or “selfish” for wanting his fair share of one of the world’s most successful podcasts.

There are multiple rumors of powerful men getting in the middle of the women’s friendship and work, including Portnoy and former HBO Sports executive Peter Nelson, or “Suitman,” as fans call him. Franklyn claims she and Cooper are the only ones to blame for their friendship ending, and I hope that’s true. Seeing women lose out on business or friendship because of men is disappointing under any circumstance. Seeing it happen to these powerful women who ran a wildly successful podcast is even more disheartening. What Cooper and Franklyn built as young women was unprecedented, and producing it through Barstool Sports was another level of genius.

To say that Barstool is bursting at the seams with testosterone is an understatement. Yet, these women entered the male-dominated company and crushed their internal competition. While Barstool helped them reach a broader audience, the hosts admitted their female version of “locker room talk” was basically untouched by the company.

Yes, there are plenty of women — especially in podcasting — who are speaking candidly about sex and relationships. The raunchiness of Call Her Daddy was considered immature to some, but it’s arguably the reason it’s such a hit — and a sort of blueprint for women in podcasting.

Ignoring the sting of the personal drama, I am happy to see two women pursuing their career goals and crushing it. I doubt fans would have gotten the same IDGAF attitude the show was based on if both women went back to Barstool to continue Call Her Daddy. Franklyn also would have given into a deal that was no longer serving her, and we still have to respect her for prioritizing herself.

The future of Sofia with an F is unclear, as Franklyn admitted in the first episode, but I hope to see both women maintain the Call Her Daddy-level of success. There is room for two successful podcasts to coexist. Creating the “Team Alex” versus “Team Sofia” drama means one woman ultimately has to lose, and we cannot afford to lose more female power in podcasting.