Review: ‘The War with Grandpa’ is a caricature of middle school life 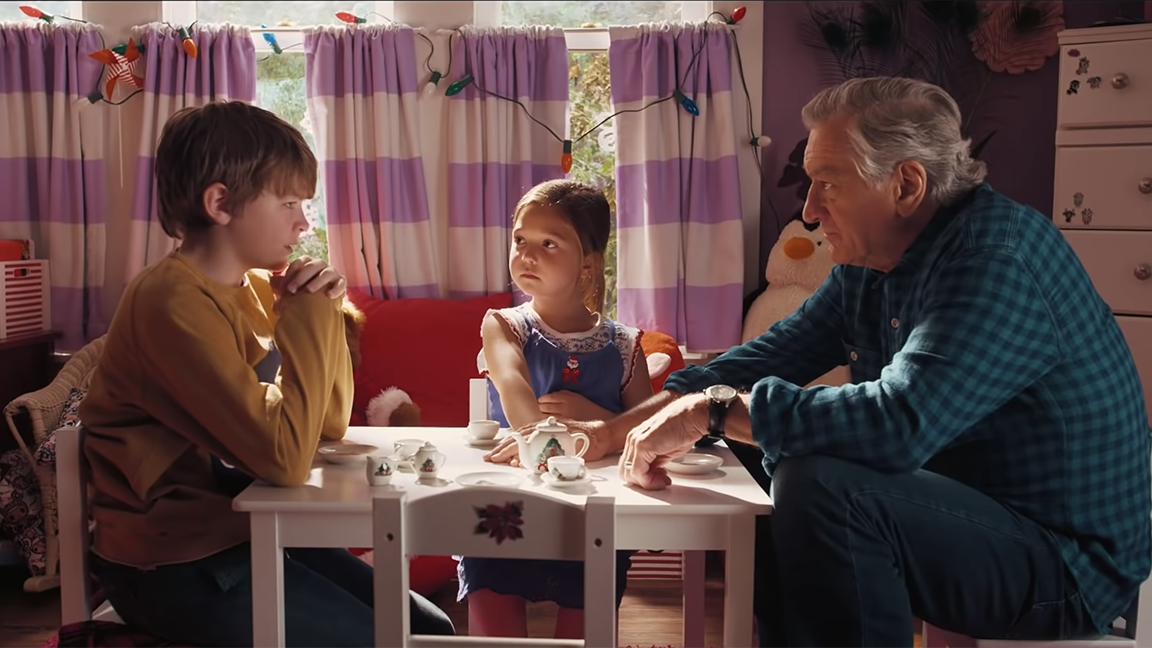 Starting middle school at the bottom of the social totem pole, facing a gnarly duo of older bullies on the daily and battling an uninvited, room-hoarding grandfather is a lot to handle for an average sixth-grade preteen.

Or at least it is for 12-year-old Peter Decker (Oakes Fegley), who likens his household to North Korea after his widower grandfather, Ed (Robert De Niro), unexpectedly moves in and claims Peter’s room — forcing Peter to move into the attic. What starts off as a lighthearted dispute soon turns into a comical “war,” with both grandson and grandfather pulling all kinds of ludicrous pranks on each other.

As their battle progresses, Peter fights to reclaim his room and kick out Ed for good. Ed initially joins the battle for fun but soon plays hard to maintain his spot in his daughter Sally Decker’s (Uma Thurman) household.

The premise of The War with Grandpa — based on Robert Kimmel Smith’s novel of the same name — is simple and sweet, with a typical preteen plot and the kind of middle school grotesque humor featured in Alexander and the Terrible, Horrible, No Good, Very Bad Day or The Diary of a Wimpy Kid sequel.

But the movie hit home, since I know what it’s like to take your childhood room for granted until it’s lost and given to another family member. This past summer, I gave up my entire room — including my bed, desk, closet and bookshelves — to my visiting grandma. Because my family lives in a quaint townhouse, I was forced to move to the living room, where our narrow family sofa became my newfound bed.

I’d like to think that I’m a mature person, so the idea of waging a war against my grandma never came to mind. But there were instances where life felt a bit unfair, and there were plenty of moments when I wished for my grandma to leave our house — sadly, that wasn’t possible because of COVID-19 — and for me to finally get my room back.

[Ten(ish) horror movies you should be watching right now]

So in that regard, I sympathized with Peter. Peter’s actions do come off as both strange and entitled, the type of entitlement that’s characteristic of an American preteen. But his pain and annoyance is quite real — maybe a bit too real. And in his case, bizarre circumstances do call for bizarre measures.

The War with Grandpa also features a star-studded cast (including Christopher Walken and Jane Seymour in addition to De Niro and Thurman) that feels really out of place for a mediocre, PG-rated family comedy. While the acting was adequate and almost expected of such a movie, the movie’s cheesy script wasn’t doing these actors any favor. De Niro, Thurman, Walken and Seymour’s characters are so commonplace that their acting felt no different than that of any other actor who plays a mother, grandfather or elderly friend in a middle school-themed family comedy.

However, there is one real star of the movie — Poppy Gagnon, who plays Jennifer Decker, Peter’s adorable and Christmas-obsessed younger sister.

Gagnon’s character may be minor, but her portrayal of Jennifer was flawless and iconic. She effortlessly made obsessing over Christmas a whole personality trait, and just like the joy that comes with the holiday season, Gagnon is a pure joy to watch onscreen.

Perhaps like any movie that focuses on the prepubescent youth, The War with Grandpa also humorously illustrates an overly hellish portrayal of middle school. In Peter’s middle school, the older students spend time picking on younger students, whether that’s throwing their backpacks in the dumpster, stealing their lunches or throwing scraps of food in their bags or clothing.

These types of school scenes never fail to make me giggle, simply because middle school is not really the doomsday dungeon that movies and television portray it to be. Sure, middle school sucked, but it wasn’t really just an apocalyptic and chaotic playing ground filled with immature and hormone-raging humans.

The movie’s ending scene is intense, almost to the point where I thought Peter would actually send Grandpa Ed to his deathbed for the sake of this petty “war.” But the grand finale is ultimately quite predictable and expected.

Like many family-themed movies, The War with Grandpa ends on an uplifting and happy note. The final sequences offer a heartfelt ending and a valuable lesson, too: No amount of petty disputes can break the love shared among a family, because family always comes first.