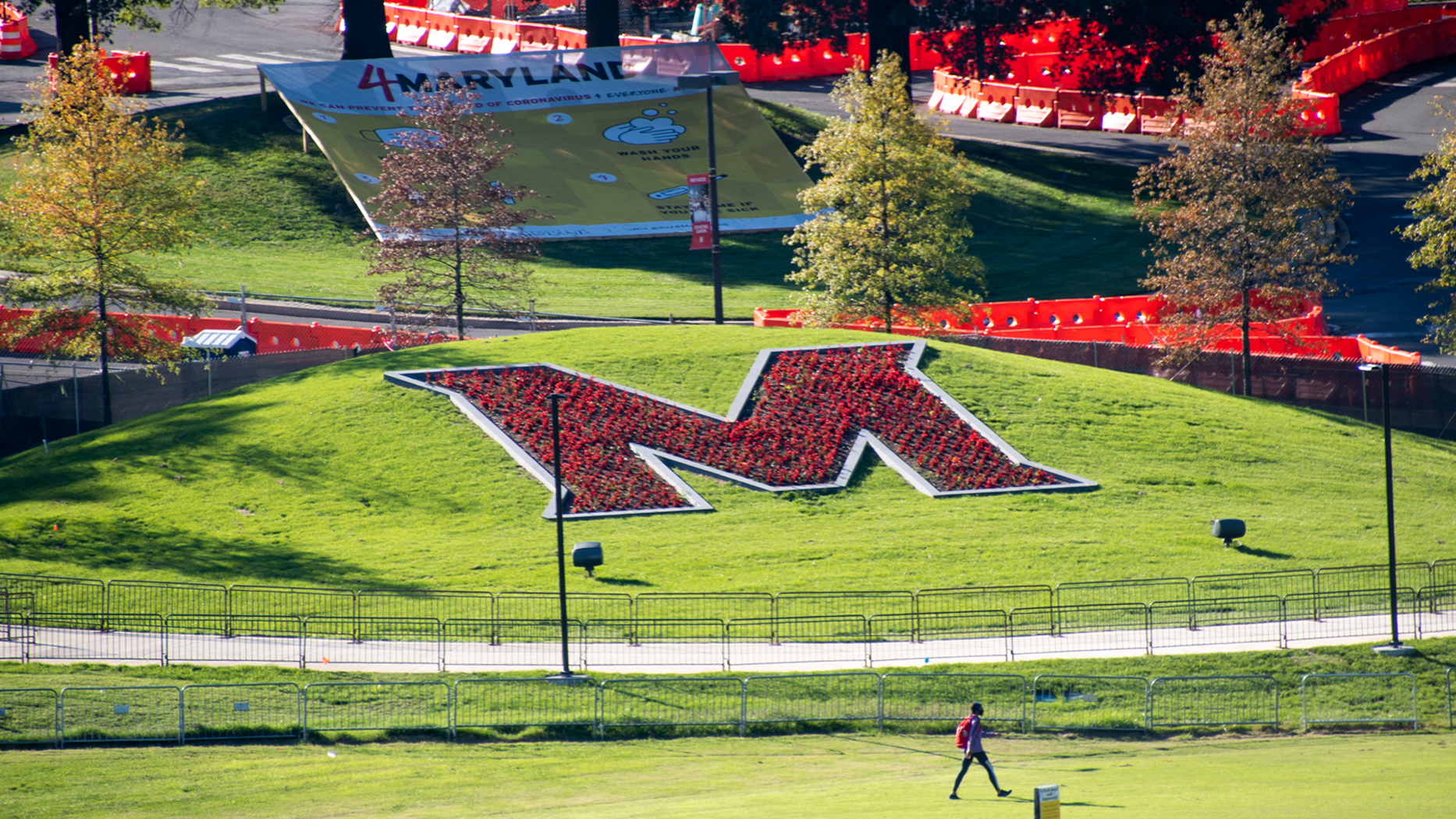 Dueling "M" circles sit next to each other on Campus Drive on Sept. 30, 2020. (Joe Ryan/The Diamondback)

When Biniyam Assefa toured the University of Maryland as a high school student, he was drawn by the picturesque campus, esteemed “M” circle and the full, green field beside the Mitchell Building.

For some, the campus has become unrecognizable because of the ongoing construction projects, such as the new Cole Field House and School of Public Policy building.

And at the heart of the university, at Stamp Student Union and on Campus Drive, there is a lot of construction making way for the Purple Line, which began construction in August 2017. The 16-mile light rail set to span from Bethesda to New Carrollton will have four stops in College Park.

Following a legal battle, the companies building the Purple Line stopped working on the transit project just three weeks ago, leaving the construction sites and two “M” circles deserted until the Maryland Department of Transportation makes a plan for moving forward.

The university is disappointed the project’s progress has been interrupted and is awaiting further updates on the construction timeline, according to a September update on the university’s division of administration and finance’s website.

Aidan English, a sophomore mechanical engineering major, supports the public transit expansion but has mixed feelings about it running through the campus’s center.

At orientation, he noticed how big the campus is. English thought walking around the campus would be confusing, but he later found he could get around with minimal trouble, even around construction.

But his familiarity with the campus was tested when he didn’t recognize a photo’s location on the university’s website. The photo taken from Hornbake Plaza didn’t show any construction and must’ve been shot when there were still trees on Campus Drive, he said.

“I couldn’t figure out where the picture was taken from. I looked at it, and I was like ‘That’s not our campus,’” English said.

For David Pape, a Shuttle-UM driver, navigating campus has become difficult due to the constant lane closures and detours stemming from the construction projects.

Driving along Campus Drive is difficult, he said, because the various projects reduce space for buses to drive in. With the Purple Line construction sites abandoned, there won’t be any progress on them, and they’ll continue to be an obstacle for drivers and pedestrians.

“Losing the slip for construction is going to make things even worse because it’s already difficult to put a 40-foot bus in [Lot] HH,” said Pape, a senior aerospace engineering major.

But Pape’s concerns extend beyond the driver’s seat. He’s also worried about greenery on campus, as space for student recreation is already limited. If the university continues to build new projects, they’re going to run out of space, he said.

But the construction projects are piling up.

“The combination of all of it turns it from kinda of a mild annoyance to a pain,” Pape said.

Alumnus Mischa Grunberg, who graduated in 2019, doesn’t remember a time when the university wasn’t under construction — and he’s been visiting the campus for 25 years.

He remembers going to his dad’s office in H.J. Patterson Hall when he was a little kid and seeing the constant slew of construction projects.

His mother, who received her master’s degree in plant sciences from this university, would walk around the campus with him and point out the different trees and types of plants. Grunberg’s favorite tree was settled between H.J. Patterson and Edward St. John, a building that finished construction in spring 2017.

“All the construction really did a number on that tree,” Grunberg said. “It stopped blooming. It stopped blossoming. I’d be surprised if it’s even still alive right now.”

Grunberg thought the university “cared about nature,” since it’s a nationally recognized arboretum. But he was disappointed after seeing the number of trees removed from Campus Drive in 2018 for the Purple Line. He said he even reached out to the university about it and was told they would plant a new tree for each one that was removed.

[Despite COVID-19 and some minor delays, UMD construction projects are on schedule]

The university maintains its original goal of planting more trees on the campus within a year of the Purple Line’s opening, which remains up in the air. The university continues to plant more trees each year than those removed, according to information provided by a university spokesperson.

Grunberg says the mass felling of trees for development is having impacts that shouldn’t be overlooked  — such as the recent flash flooding in the area, for example.

While he thinks the university made a good decision about expanding and developing as the student population grows, he says they went about it the wrong way.

“How long is the University of Maryland going to be a terrapin anymore? The mascot is just going to be a roll of caution tape,” Grunberg said.