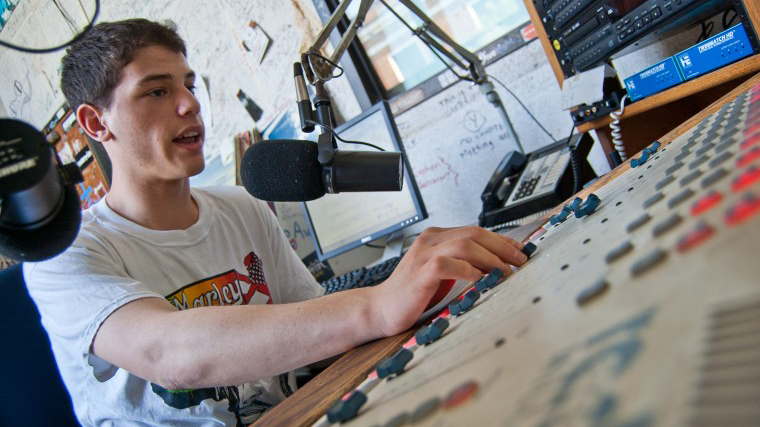 A WMUC DJ works in the studio before the coronavirus pandemic. (File Photo/The Diamodback)

Students who have participated in the long-lauded tradition of hosting a radio show understand the allure of the physical radio station. And WMUC, the University of Maryland’s campus radio station, is particularly beloved.

The cramped black chalkboard walls bear the scrawled names of the semester’s shows. A mysterious stain colors the old lumpy couch in the entrance. DJs need an access code to get in, which feels exclusive, but the code never works — which feels even more exclusive.

There’s no ventilation, just a single migrating fan that blows around the same hot, hormone-heavy air. If you’re part of a multi-staffed show, you have to sit elbow-to-elbow with your fellow hosts, breathing in each other’s carbon dioxide, with even your goosebumps touching.

A friend and I co-host a music show at WMUC, and we join the expanding league of remote DJs trying to adapt to the format. Last week, we tried to broadcast outside, which went badly. We spent 18 minutes trying to figure out how to plug in an external microphone. When we listened back to the broadcast, we found that a folk music playlist interrupted our show in regular increments, resulting in a chaotic melange of diced up conversation and indulgent banjo riffs.

We aren’t the only ones who’ve been having problems. Spotty Wi-Fi is a trademark of remote broadcasting, according to Nolan, who’s been overseeing the switch to broadcasting remotely. At the beginning of the semester, Nolan grabbed a few odds and ends from the radio station and set up a remote server — a desktop computer from which he oversees the goings-on at the station — in his kitchen. Nolan is the person DJs frantically text when they’re having a problem — and he’s been getting a lot of messages lately.

Bad Wi-Fi can make or break a radio broadcast, Nolan said. If DJs aren’t connected to a network or if they haven’t signed into the server properly, an automatic playlist intended to fill empty airtime will play while they resolve the issue.

“I heard the iCarly theme song for 20 minutes because [a DJ] couldn’t get her mic to work,” said Madeline Redding, WMUC’s program director.

[‘The Great British Baking Show’ is back and blander than ever]

Redding is in charge of scheduling and training new DJs, along with monitoring broadcasts to make sure they comply with FCC regulations and the station’s guidelines. Now, she also deals with complaints about remote broadcasting.

Redding, a junior theatre major, hosts a show called Meet Your Neighbor, in which she interviews students at this university about their lives. The experience requires an intimacy that simply isn’t replicable over Zoom, Redding said. Eye contact, specifically, is a big part of the way Redding said she cultivates a comfortable atmosphere for her guests. But the one remote interview Redding has done so far this semester “wasn’t organic.”

“How am I gonna get guests to trust me on air and share information about themselves when they can’t be … face-to-face?” Redding said.

Still, some WMUC members can see the benefits of going remote.

Peck manages Third Rail, the live Sunday music show at WMUC that has since moved virtual. Over the summer, Third Rail moved to Instagram Live. Recently, they’ve switched to Zoom.

“There is … kind of a benefit,” Peck said. “Geographical distance is not an issue anymore.”

“I do think that there’s still ways to create community and build excitement around artists,” Peck said.

Despite these issues, DJs miss the atmosphere of the radio station the most.

Nolan comes into the physical studio every once in a while to fix a problem.

“It’s so sad going in there, and there’s just no one there,” Nolan said. “There’s a certain charm [in] … being able to actually sit in the studio.”

I can attest to that sense of loss. My co-host and I used to like to call our hour time-slot at the radio “music therapy.” There’s something serene about the studio and its insular little sonic habitat.

“I think radio — especially our station — needs the space,” Redding said. “It brings an energy that we simply can’t cultivate virtually.”