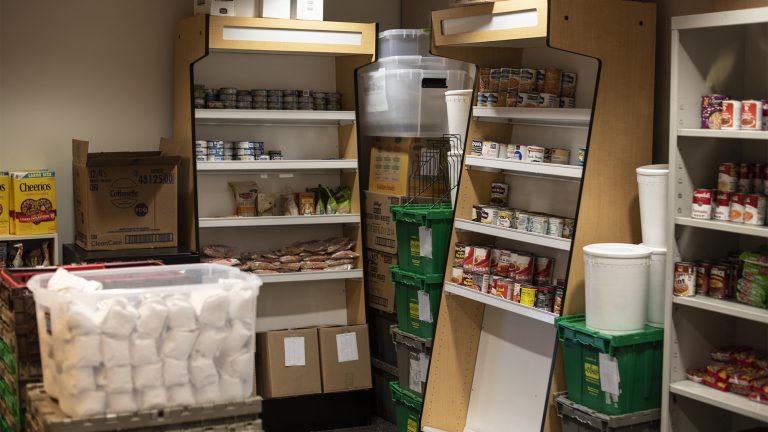 The Campus Pantry in the University Health Center on March 13, 2020. (Eric Harkleroad/The Diamondback)

When the University of Maryland closed its campus in March as the coronavirus pandemic set in, every student faced new uncertainties. But for those without a permanent home to return to or a secure source of food, the campus’s closure — and the five months that followed — presented even greater challenges.

“Certainly, the pandemic is exacerbating the food and housing insecurity issue,” said Brian Watkins, director of the university’s Office of Parent and Family Affairs.

Watkins is the founder and chairperson of Fostering Terps Success, a support program for university students with experience in foster care or who are homeless or at risk of homelessness. In the spring, Fostering Terps Success offered its students emergency stipends and 50-meal dining plans to ensure their needs were met. Some of those students stayed on the campus as spring turned into summer, without a place to go home to.

Since then, Fostering Terps Success, along with the Campus Food Pantry — sustained by a massive spike in donations amid the pandemic — has continued to expand operations into the fall semester to accommodate a growing number of students and staff in need.

Food and housing insecurity affected many university students even before the pandemic. In a 2019 study from the Counseling Center’s research unit, about 20 percent of students reported being food insecure, meaning they lack regular access to nutritious food.

And in a new student census conducted by the Counseling Center over the summer and winter of 2019 and 2020, 225 incoming freshman students out of about 4,000 surveyed reported being homeless at some point in the past year, Watkins said.

The exact effect of the pandemic on those numbers is not yet known, but the recent spike in joblessness across the country and overall economic upheaval has created financial uncertainty for millions of Americans.

Young adult workers were among the hardest hit when businesses began to close in the spring, with as many as one in four workers between 16 and 24 years old without a job in May, according to the Pew Research Center.

As the semester continues, it’s unclear how many more students will come to rely on Fostering Terps Success, Watkins said. The program is relatively new — it was only launched last academic year — but many students are just finding out about it, he said. Since March, an additional 10 students have reached out asking for support, Watkins noted.

Students in Fostering Terps Success were able to receive some monetary support from the CARES Act, a coronavirus relief bill passed by Congress in March that allocated funding to higher education institutions and specifically to Pell Grant recipients within those institutions. Now that classes have resumed, Watkins said, the program will continue to help students with textbook or meal plan purchases as needed.

But one of the greatest concerns for homeless students, or those without a family to turn to, is the isolation that comes with living in a pandemic, he said — an issue money can’t fix.

“They can’t just pick up the phone and call up a parent, and talk about what they’re experiencing at the university, and kind of get that pep talk or morale boost from their family,” Watkins said.

To combat that emotional strain, Fostering Terps Success pairs students with a “campus coach,” a university staff member that meets with them regularly to provide mental and emotional support.

The coronavirus pandemic has also brought on a national eviction crisis. In Maryland, a statewide moratorium on evictions issued by the state Court of Appeals expired July 25. The Aspen Institute has predicted that as many as 356,000 Maryland renters could be at risk of eviction by the end of September.

The crisis has “already has an impact” on students, Watkins said, as some have reached out to Fostering Terps Success to express their concerns.

Meanwhile, the Campus Food Pantry has seen a marked surge in the number of people it serves weekly, said Allison Tjaden, assistant director for new initiatives at Dining Services.

Back in March, the pantry opened its doors for an additional day each week and placed advanced orders for goods from the Capital Area Food Bank, an organization based in Washington, D.C., that outsources donations to smaller regional pantries.

Up until then, the pantry had been serving about 70 people per week. At its peak in July, that number grew to 500 people, Tjaden said.

“In some ways, what’s happening for us in the pantry is really being mirrored all across the country for all emergency food services,” Tjaden said. “It wasn’t surprising that we would see something parallel on campus for our pantry.”

Since July, the number of students and staff returning to the pantry each week has leveled off to about 200, Tjaden said. But over the summer, increasing demand for its services, coupled with “panic buying”-induced shortages of staple food items such as pasta and rice, created challenges for the pantry.

“There were weeks in the summer where we had a lot of concern about whether or not we were going to be able to make it through the whole summer,” Tjaden said.

[One in five UMD students are food insecure. These students want to fix that.]

During a normal semester, most of the food items in the pantry are donated, with only a few items needing to be purchased, she said. At some point during the summer, the situation changed. A majority of its food items came from direct purchases, and the rest was donated.

That has made financial donations from the university community even more important, Tjaden said.

From March 25 through Monday, the pantry received $95,680 in donations, said Ed Kenny, director of the university’s development and external relations office. During that same period last year, donations reached a little over $13,000.

That 600 percent increase in donations, more than a quarter of which came from university staff, represents an “outpouring of support we haven’t seen before,” Kenny said.

Growing financial support, as well as food donations from a Dining Services distributor and the campus community garden, makes Tjaden confident that the pantry will be able to sustain even more students as the semester continues.

“I think if we could serve 500 people a week in the summer, we are ready for anything this semester,” she said.