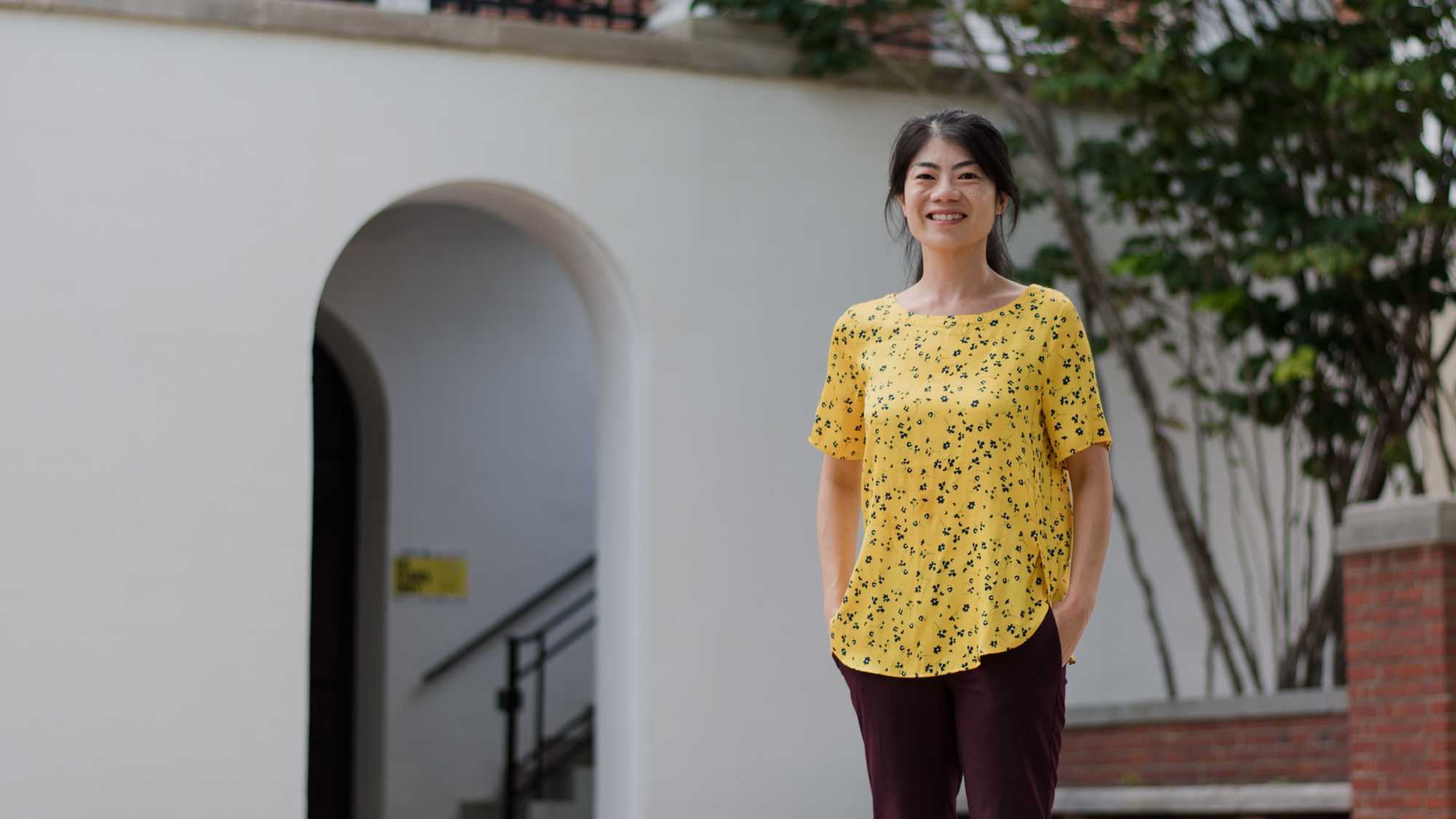 Hearing and Speech Sciences Professor Yi Ting Huang sent out a survey to evaluate how the university is supporting faculty and staff who must arrange for childcare during the coronavirus pandemic. (Gabby Baniqued/The Diamondback)

Yi Ting Huang is beyond the sadness and anger — that would be too much to handle for too long, she said. Instead, she is focusing on figuring out solutions. And, as a parent and a professor in the hearing and speech sciences department at the University of Maryland, there is one specific challenge she is trying to overcome: child care amid the pandemic.

At the end of August, Huang and her doctoral student, Kathleen Oppenheimer, created a survey to figure out what kind of support was available for faculty, staff and students with children at this university. The two researchers found that there are “clear gaps” between the support that caregivers receive and the support they wish they had.

The survey was shared with a Listserv for faculty, staff and students who are parents, as well as with members of the Graduate Student Government. By Sept. 6, almost 250 people responded. 40 percent of them were faculty, 30 percent were staff and 29 percent were students.

Different members of the university community have different needs, Oppenheimer said. Staff who are expected to come to work in person but have jobs that can be done from home want to be allowed to telework. Graduate students tend to struggle to afford child care because of their stipend. And most faculty members want to be dismissed from their service requirements.

Flexible meeting and work times were the most common type of support received, according to results provided by Huang. But many respondents said they wanted reduced workload or additional help, such as teaching or research assistants.

Additionally, a quarter of respondents reported they did not receive any support on child care. The responses indicate a discrepancy in the support given to caregivers — some departments were addressing all the needs that people had, and others weren’t saying anything at all, Huang said.

That’s not particularly surprising, Oppenheimer said. Parents across the country are struggling to juggle work and child care, she said — herself included. Oppenheimer has a 9-month-old daughter.

“If day care hadn’t opened up … I probably would have had to take more time off of school,” Oppenheimer said.

But the survey is not meant to design policy. Its purpose is to highlight and diagnose a problem, Huang said.

“The ball is in the court of people who do make policy,” Huang said.

In an interview Wednesday, university President Darryll Pines told The Diamondback the administration is working toward a plan for child care support. He might be able to make a recommendation by the end of the semester, he said.

Over the summer, the faculty affairs office did a series of interviews with faculty members to find out what issues they were facing. Child care came up a lot, said director of faculty leadership Laura Rosenthal.

This fall, the office has formed two committees on the issue, Rosenthal said. She is leading one that will develop guidance for department chairs, she said. The other, led by associate provost for faculty affairs John Bertot, focuses on developing policy.

The committees, with about 14 people altogether, include faculty members — both on the professional track and the tenure track — and staff members. It also includes caregivers and people of color. The committees have been regularly meeting with the associate deans of faculty affairs of all colleges, Rosenthal said.

While most of the respondents have requested some sort of change in the amount of work, Rosenthal said that would not be enforceable at a university level. It has to be worked out within the department, she said.

Major curriculum revisions, for instance, can be put off for the time. Scheduling accommodations are also possible. But the high priority is to make sure all classes are running, Rosenthal said.

Rosenthal also suggested that departments introduce a faculty and staff assistance program, which would run a seminar on strategies to address stress and anxiety.

“Part of what we want to do in this project is just make sure that all the leaders on campus understand what people are going through,” Rosenthal said.

The guidelines will be recommended for all departments across the campus, Rosenthal said. But departments are all very different, she said, and that reflects on their teaching obligation, the proportion between teaching, research and service.

“Maryland has always given departments some control over how they manage that,” she said.

But the survey has demonstrated parents’ desire for university-level policy. Anhelina Bilokon, a first-year graduate student and mother of a two-year-old, is one of those parents.

“We can’t have every department giving different regulations,” Bilokon said. “Having [universal] guidelines in place gives ease to people, just knowing what expectations are and knowing what flexibilities are in place.”

Bilokon was pregnant during her junior year. Her experience with the department was so bad, she said, that she decided to take a semester off when her daughter was born. And when she returned six months later, Bilokon transferred into a different major.

In her previous department, she ran into issues with some of her professors, even causing her to drop one of her classes. They did not provide her with accommodations or extensions, she said, and often told her to just quit.

But when Bilokon first walked into the department of hearing and speech sciences’ advising office, it was different. She had her six-month-old daughter with her, as she couldn’t afford child care just yet. And the advisor was understanding from day one.

“She already had my plan in place for me,” Bilokon said. “She told me what I need to do to succeed, and it was great. And I was like a run in with confidence and she always continued that conversation with me.”

The staff and professors from her department were supportive, she said, both academically and emotionally.

“I never felt discriminated against or was never told that I made a mistake, or that I can’t be a productive student and a mother,” she said.

The office is planning to release these guidelines in the next few weeks, Rosenthal said. Policy revisions will be ongoing. But the university is aware that the pandemic has a wide range of effects, depending on employment status, family situation, gender and race.

“There’s not going to be a one-size-fits-all solution,” Rosenthal said. “There’s going to have to be a lot of thought about how different people in their different intersectional identities are having to manage this challenge.”

“The loss of child care isn’t a UMD problem,” she said. “It’s a society problem.”