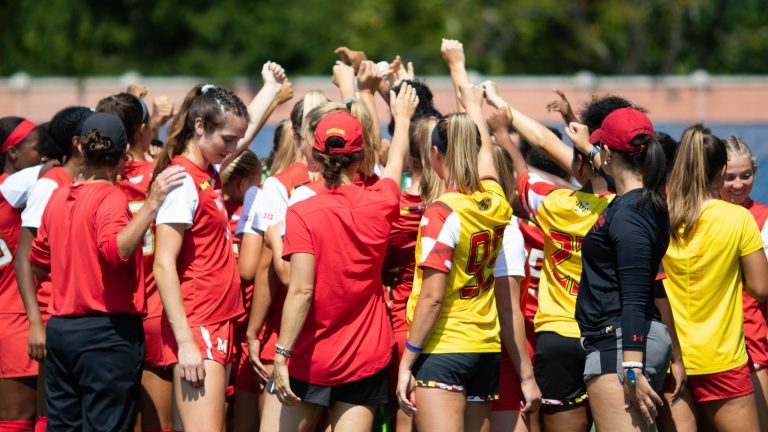 Maryland women's soccer comes together before their 1-1 tie with George Washington on Sept. 8, 2019 in Washington, D.C. (Julia Nikhinson/The Diamondback)

After a more-than-four-month hiatus, Maryland women’s soccer only spent four days together — and the team only had a handful of official practices — before the season was postponed.

But the team learned a lot about itself in those four days. With new faces taking the field alongside veterans for the first time, the Terps were itching to compete.

For now, though, they’ll have to wait.

Maryland isn’t quite sure when it will return to action. In the meantime, though, it’s staying optimistic and looking to use this newfound free time to build partnerships on and off the field.

In this time of great uncertainty, it’s all the Terps can do.

“I honestly kind of view it as a spring season, but in the fall,” midfielder Hope Lewandoski said. “I think it’s going to be a great opportunity for us because we’re gonna be able to play as a team all together. Normally for a regular season, we’d have like two weeks before we play, and now we get like a few months.”

Over the next few months, Maryland will be gearing up for a potential season, and the Terps’ delayed start means one thing for certain: sweeping changes across the board.

Things haven’t gone quite to plan this year, such as Maryland’s spring practice schedule. The team only spent about two weeks together before the university’s campus shut down, so it’s trying to make up for that lost time.

To do that, coach Ray Leone has looked toward an unlikely source: men’s lacrosse coach John Tillman.

The two are neighbors and see each other everyday, Leone said.

“We are trying to flip their mindset to where we are now, doing what lacrosse has done forever,” Leone said. ”They come in the fall, they get ready, and they have their championship season in the spring.”

Although Leone doesn’t know exactly what this fall will look like, the fifth-year coach thinks his team has recovered from the initial devastation of the season’s postponement and is ready to practice at a high level.

“You could see the spirit was zapped a little bit when it first happened, and we had to give them some time to really get their heads around it,” Leone said. “I feel their strength and mindset is all coming back and getting stronger everyday.”

Maryland is coming off a 9-8-3 campaign in 2019 — its first season above .500 since 2012. The program also made its first Big Ten tournament appearance in team history.

Buoyed by momentum from last year’s success, the Terps are aiming to integrate a large crop of newcomers into the squad. Without the pressure of imminent competition, Maryland hopes the youth can make a smooth transition to the collegiate game.

“We’re at an advantage right now because usually if we play in the fall, we have max, two, maybe three weeks before we have a game or a scrimmage,” midfielder Anissa Mose said. “Now, we have a lot more time to develop.”

In a normal year, the Terps would’ve played over a quarter of games by this time. They know this season will be anything but typical when it kicks off — that’s why they’re emphasizing preparedness.

Practicing throughout the fall and playing in the spring is a real possibility. And Leone’s squad is determined to be ready for it.

“The biggest thing that this entire thing has taught us is that we have to be so adaptable,” Lewandoski said. “Anything could happen, and we just got to be ready for when we’re called to play.”