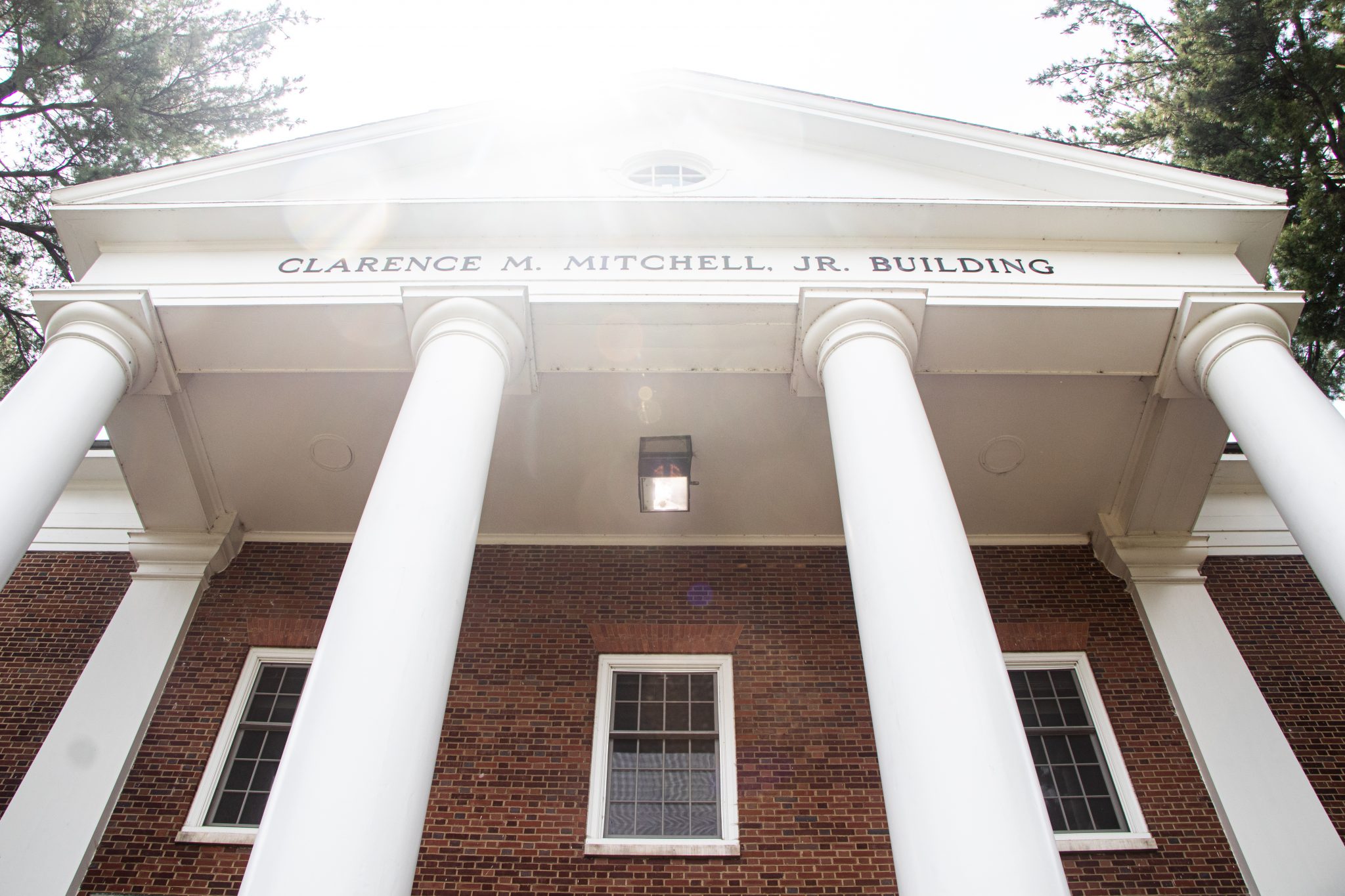 The University of Maryland student conduct office is located in the Mitchell Building. (Julia Nikhinson/The Diamondback)

The University of Maryland’s Office of Student Conduct issued 19 interim suspensions Thursday night as part of its effort to enforce compliance with the school’s guidelines to prevent the spread of COVID-19, according to a campuswide email sent Friday by Andrea Goodwin, the office’s director.

The nine students who tested positive for the virus reached out to Benjamin Birnbach, a central board member of the University Student Judiciary, on Thursday night. Their suspensions immediately bothered him, Birnbach said. Though he understands why the university has the power to issue interim suspensions, he stressed that these nine students who were suspended were behaving responsibly.

“If the point of this rule is to make sure that somebody isn’t harming the community, and to stop them from doing it preemptively, I don’t know how that applies to people sitting in their apartments, not doing anything,” he said.

In an email to The Diamondback Friday, university spokesperson Katie Lawson wrote that the Office of Student Conduct is still working to meet with all the students who received interim suspensions. She did not confirm whether the 10 suspensions were lifted.

Lawson also explained that interim suspensions may be issued when allegations of non-compliance with the Code of Student Conduct are made.

“In reports of noncompliance for behaviors related to the spread of COVID-19, we have stated that we will not hesitate to take swift and severe disciplinary action, if necessary,” Lawson wrote. “Not following 4 Maryland health behaviors puts our community at risk.”

When an interim suspension is issued, it prompts a meeting with the Office of Student Conduct to “assess evidence and context,” which involves learning about a student’s perspective and circumstances, Lawson wrote. Information presented in this process, she added, could trigger the suspension to be lifted.

The situation concerned Birnbach. For one, he said, the nine students who contacted him said that when they were offered university-provided isolation housing by a University Health Center staffer, they didn’t understand that it was a directive, rather than an option.

According to the Code of Student Conduct, students may be issued interim suspensions without prior notice if there is evidence that they pose a “significant threat to themselves or others, or to the stability and continuation of normal University operations.” The student will then be allowed to meet with the student conduct director within five business days from the effective date of the suspension, although they are not guaranteed that they will be allowed to return to the campus.

But Birnbach said the nine students who contacted him had been behaving precisely how he has been: Though Birnbach has not tested positive for COVID-19, he has a sore throat and chills and strongly suspects he has the virus. Two of his roommates have tested positive for COVID-19, as has his girlfriend, who is currently living with them. They have not left their apartment since earlier this week, Birnbach said.

Similarly, one of the students who was issued an interim suspension — a junior finance major who asked that his name be withheld due to the sensitive nature of his experience — said he has been quarantining in his apartment since he woke up with symptoms on Monday. He got a rapid test for the virus the next day, and it came back positive.

In an email to Goodwin and the office’s coordinator for non-academic misconduct, Birnbach asked if he should be expecting a letter of suspension, too. He also raised his concerns that the university’s use of interim suspensions would cause harm to students who are not themselves harming the university community.

However, she wrote, the number of positive COVID-19 cases at the university has increased. Indeed, according to the school’s coronavirus dashboard as of Friday evening, there were 35 positive university-administered test results received Thursday. The same day, half of a floor in Cumberland Hall was asked to quarantine after at least one person on the floor tested positive, and Maryland athletics paused all workouts after 46 student-athletes across 10 different teams tested positive.

In her email, Goodwin wrote that the surge in cases can largely be attributed to people failing to comply with university expectations — gathering in large groups, for instance, as well as failing to wear masks and stay 6 feet apart from one another. The spike can also be traced back “at times, to the reckless disregard for the directives of the medical professionals at the University Health Center that those infected with the virus isolate themselves so they do not infect others,” Goodwin wrote.

But the junior finance major said his roommate — who tested negative for COVID-19 — has been leaving food for him in front of his door so that he doesn’t have to enter the apartment’s common area. He also has his own bathroom, which is connected to his room.

When he called the University Health Center to inform staffers he had tested positive, he said the person who answered recommended he go home to quarantine or use isolation housing provided by the university. However, he told her that he preferred not to bring the virus back home to his parents — especially since his dad has an underlying condition — and would stay in his apartment, rather than move to university housing.

At that point, he said he didn’t realize there was a problem. But on Thursday night, he received notice of his interim suspension. The letter, signed by Goodwin, advised him that he was not permitted to attend class — virtually or in-person — and was not permitted on “University premises” without written permission from the Office of Student Conduct. Should he enter university premises without permission, Goodwin’s letter read, he may be issued a “Denial of Access and/or an Advisement of Trespass” by the “Department of Public Safety.”

The student was shocked, and wrote to the office, requesting a meeting with Goodwin. He felt as though he had been complying with all safety guidelines, he said: He had been quarantining even before testing positive, and he had reported his positive test result to the school.

“I was very confused, pretty mad about it, too, since I got no heads up from it. No warning,” he said.

His roommate was also issued an interim suspension, he said. On Friday afternoon, though, Goodwin gave him a call to lift the suspension, he said. He said she explained to him that the health director had received information that it wasn’t viable for him to quarantine in his apartment.

“Now I’m okay, now I’m good with everything. But it was very stressful early on,” he said.

On Friday night, Birnbach said that — though the nine students who reached out to him are no longer being suspended — his concerns haven’t been alleviated.

“Obviously, I’m happy to hear that they’ve lifted the suspensions. But that’s not the point,” he said. “They’re putting guilty before innocent.”