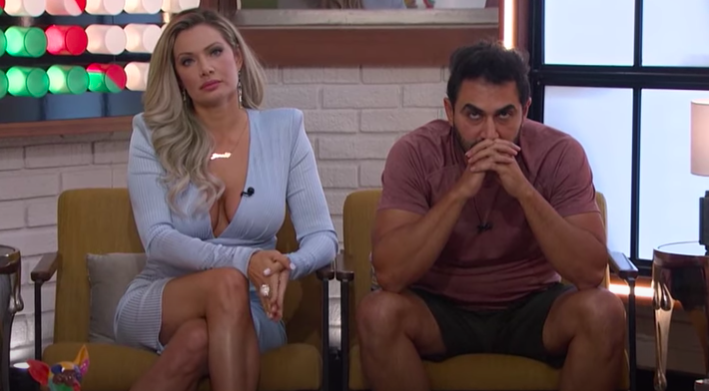 Do you feel that little twinge of bitterness? That certain feeling where, no matter what you do in the game, no matter how many Twitter followers you have, you still aren’t the best player in the Big Brother house? Well, my friend, you may be suffering from a case of “Janelleousy,” a recurring illness where you feel a crushing burden of inadequacy because you happen to be around the one and only Janelle Pierzina.

This season of Big Brother is only the second All-Stars season of the show’s 22 American iterations, and the cast is a mixed bag of former winners, fan favorites and whoever happened to pick up the phone and agree to be on it in the age of COVID-19.

That means you get impressive former players like BB8 runner up Dani Briones and BB14 winner Ian Terry. You also get less impressive players like Christmas Abbott, whose physical prowess on BB19 was diminished by a foot injury early in the game, and David Alexander, who was banished from BB21 after just a single day in the house.

But the new season looked like it was saved when Janelle (BB6, BB7 & BB14) agreed to return for a record-breaking fourth competitive season, making her one of only two players to appear in both All-Stars seasons, along with Kaysar Ridha (BB6 & BB7). It looked like the coronation for a true BB legend, and perhaps this could finally be the season where Janelle won it all.

But then, Janelle was unceremoniously evicted third, landing in a measly 14th place.

In order to win Big Brother, you need a strange mix of power, popularity and luck. Former players have won for various reasons: Ian and Josh Martinez (BB19) won because of bitter juries. Derrick Levasseur (BB16) was basically given the title for playing a nearly flawless social game. “Evel Dick” Donato (BB8 & BB13) bullied everyone so mercilessly that they had to respect his sheer commitment to making life a living hell for all those involved — including his own daughter, Dani. But often, the best players don’t actually win the game.

[Review: ‘Chemical Hearts’ suffers from cliches as a coming-of-age tale]

One of the most famous maxims of the show is to not be a floater: someone who doesn’t rock the boat by winning too many competitions and avoids appearing like a threat. You also can’t make yourself a big target from the outset, because that often leads to early exits. That’s what unfortunately befell Janelle this year. She was ostracized from the jump, with major cases of “Janelleousy” cropping up among her fellow houseguests from day one. In a season full of all-stars, there was one true star that shined brighter than the others. And for that, Janelle was forced to leave early.

It’s a routine Janelle is very used to at this point. In her first season, she was an obvious standout among a pretty bland cast. She always had the funniest lines, the coolest head and the best social skills. After being nominated three times in the first six weeks, Janelle basically willed herself into being the odds-on favorite to take first place, a fact known by the eventual winner and runner-up, who kicked her out in third place because they both knew they couldn’t beat her in the end. When Janelle returned the very next season, the exact same fate befell her: Mike “Boogie” Malin and Erika Landin knew the others would easily vote for Janelle to win, so they sent her packing in third place once again.

Janelle’s third appearance was strange, but it helps to explain what happened to her this time — during a seemingly normal season, four returning players, including Janelle, returned as coaches for the houseguests. Those coaches eventually became players themselves and Janelle was thrown into the deep end. Her status as a threat was immediate and, through a plan masterminded by the other coaches, she was given the boot in her first week of eligibility.

Flash forward to the present season of All-Stars, and a sense of deja vu was evident. Janelle was obviously the big fish in a small pond, but this time she tried to downplay her legendary status. It backfired, as she and longtime ally Kaysar put themselves on a metaphoric island that made her powerless, even as the other houseguests viewed her as a threat. It was the ultimate raw deal, and the BB fandom felt a tremendous sense of injustice as Janelle exited the house for the fourth time without a win.

Janelle’s status as one of the greatest players in the show’s history is still unquestioned. She’s spent a record 200 days total in the BB house, she won America’s favorite player during the first All-Stars season and she’s probably a lock to win it again this year. The fact that she hasn’t been able to win the big prize yet is both disappointing and weirdly mythical. Her cult of personality is so big that her very presence this season was enough to get her evicted without actually doing anything. That’s the kind of power that is admittedly dangerous in the pressure cooker atmosphere of the Big Brother house, but Janelle was someone who never lost her cool.

She was nevertheless too good for this so-called All-Stars season. Players like Tyler Crispen (BB20) and Nicole Franzel (BB16 & BB18) couldn’t understand why Janelle had such an aura around her, but they still felt it. In a season where the divide between the more aggressive gameplay of “old school” players and the more passive “new school” players became the main topic of discussion, Janelle was the figurehead for the old guard. She epitomizes an era where Big Brother was new enough for the houseguests to mess around with the rules and powers in the game, while also weaponizing social skills and coining key pieces of lore that all fans know by heart now.

She may not have invented the backdoor (thanks Nakomis) or yelled the most indelible line in BB history (for my money, it’s probably Rachel Reilly’s “floaters, you better grab a life vest” — absolutely classic). But Janelle is still a top-tier all-timer. Janelle is a tour-de-force that I can only hope comes back for an unprecedented fifth season. Until then, she’s already cemented her legendary status. No wonder “Janelleousy” was so widespread this year.