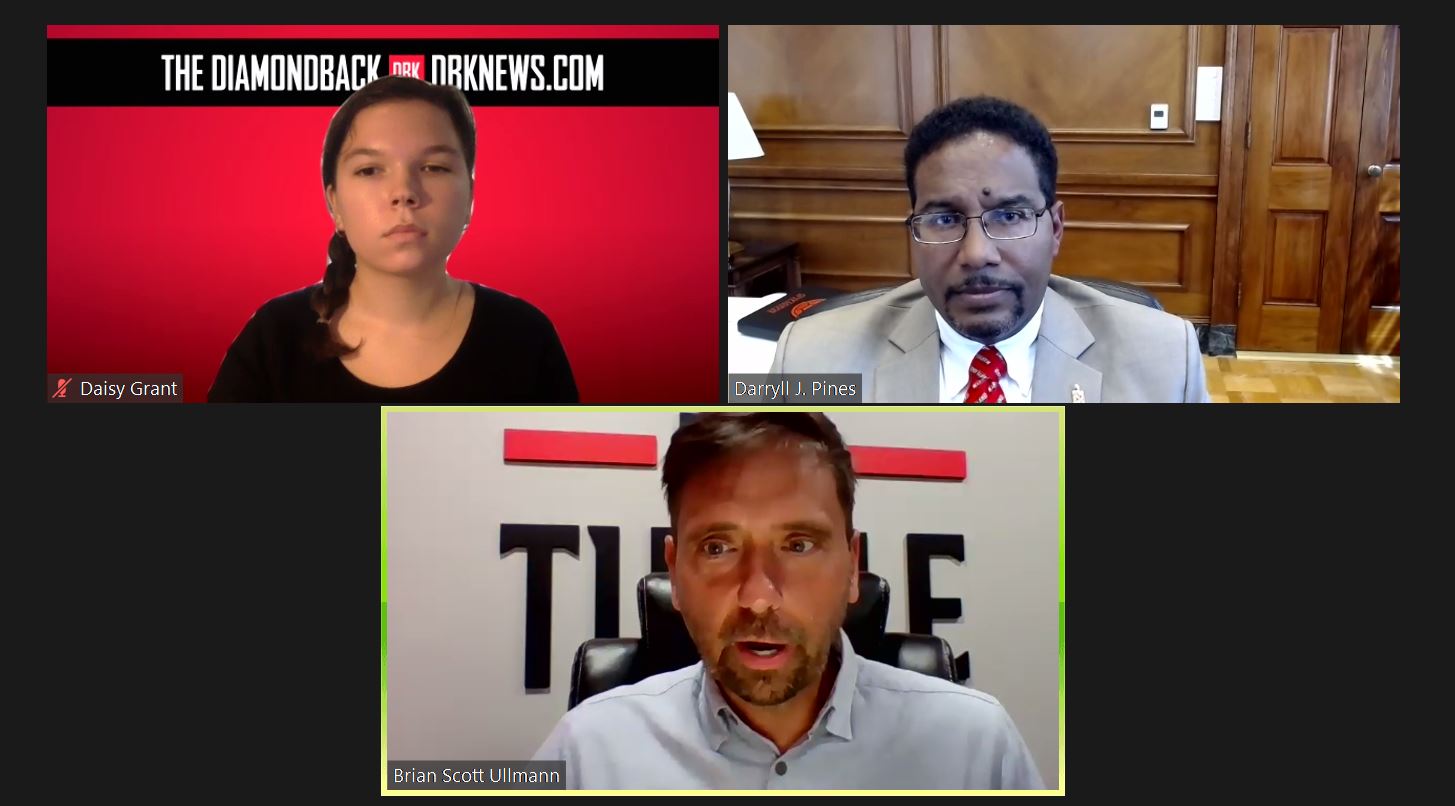 At a virtual town hall Monday co-moderated by The Diamondback, university President Darryll Pines elaborated on the university’s plans for reopening amid the coronavirus pandemic and addressed a number of student concerns ahead of the 2020-21 school year.

After launching into a presentation on the “4Maryland” behaviors, a checklist for community members to reduce the spread of the coronavirus, Pines noted that “no one metric” would determine if in-person classes should resume this fall.

In a campuswide email August 10, the president announced that in-person undergraduate courses would be delayed until Sept. 14, though virtual classes would begin as planned on August 31.

The two-week delay will allow the university to phase-in the resumption of on-campus activities and ensure campuswide testing can be implemented before most students return, allowing officials to assess the campus positivity rate, according to the email.

As the university enters its second week of testing students, Pines said the community is “fortunate” for the university’s 0.13 percent positivity rate thus far. He also noted that this is only the first round of community tests, and that after a second round of testing in September, the university will begin to implement “sentinel testing” — 1,000 people tested for the virus each week, free of charge, until the end of the semester.

When asked by a student about the need to welcome students back to the campus given the risks, Pines acknowledged that other universities have struggled to enforce social distancing measures of late. However, he noted that the university would have to balance safely living with the virus and providing an education.

“It is likely that all of us in this uncertain time period will live with this virus for a few more years,” he said. “We know that there’ll be some people that will not be compliant, as it has been exhibited at other universities, but we hope that our messaging — that students talking to other students, faculty talking to other faculty, staff talking to other staff — will do a community shared approach to keep our campus physically open.”

Last week, the University of North Carolina at Chapel Hill shifted to remote-only undergraduate instruction after 130 students tested positive for the coronavirus during the first week of classes.

Earlier, the North Carolina school had identified four virus clusters in the span of three days; one occurred at an on-campus residence hall and another at a fraternity house off-campus. Despite the fact that less than 30 percent of courses were taught in-person, the positivity rate jumped from 2.8 percent to 13.6 percent percent in one week.

Efforts to keep up the messaging off-campus will be aided by “health ambassadors” hired by the Prince George’s County Department of Health, who will carry masks with them and report “egregious” violations of social distancing rules — such as parties or large gatherings — to university authorities, who will then determine sanctions based on the Code of Student Conduct. These ambassadors have not been told to intervene, Pines said, but to simply gather evidence.

“We really don’t want to obviously have to take the extreme measure and go through the counselors of student conduct to make a decision or to reprimand a student … but we do we do want to use these health ambassadors to remind students of these healthy behaviors and to mitigate the spread of COVID-19,” he said.

During the town hall, Pines also addressed the university’s decision not to lower tuition and mandatory fees despite concerns from students that the quality of an online education will not compare to in-person classes.

A petition that launched three weeks ago calling on university administrators to reduce certain fees for resources and amenities that students will have limited or no access to this school year has garnered more than 2,000 signatures.

Pines defended the retainment of full tuition Monday, pointing to specific courses that have been adapted to an online format, such as one music class that has sent Steinway pianos to students to practice their course work from home.

Similar innovations made by professors to adapt their classes to an online format have allowed for the same “high quality” of education that students would expect in an in-person format, he said. However, the university would look into refunding the athletics fee, given that the Big Ten has postponed fall sports, Pines said.

The president was also asked about the ongoing conflict between student renters and the owners and managers of the Courtyards and South Campus Commons apartment complexes, which, though privately-owned, are located on university property.

Many tenants began protesting after adaptations were made to their leases last month, asking residents to assume the risk that they may contract the coronavirus on campus and sicken or die. Under the revised regulations, apartment management can also request that students leave their unit if their “continued presence in that unit poses a health or safety risk.”

After pleading with university officials for weeks, two lawyers representing more than 100 students sent a letter to Courtyards’ and South Campus Commons’ owners and managers identifying the leases as invalid, and pledged to “vigorously defend” the students in court if needed.

Pines signed onto a letter with College Park Mayor Patrick Wojahn earlier this month encouraging local landlords to consider allowing student renters to terminate their leases or sublet to those who wish to live in the area.

He also mentioned that the university is working with stakeholders in the state to find a solution, though he did not have an answer at present as to what would happen.

“It’s unfortunate that we don’t have an answer today, but we are still working and advocating on behalf of students on our campus to get this done,” Pines said.

The president also fielded questions about the safety of Maryland housekeepers who will have to clean dorms as they open up this week.

[College Park residents brace for the return of UMD students]

In mid-July, the union that represents University of Maryland workers filed a complaint with the State Higher Education Labor Relations Board alleging that housekeepers on the campus do not have the equipment or training to do their jobs safely during the pandemic.

Two months earlier, the union submitted a request to bargain letter to the university, asking to negotiate campuswide mandatory screening procedures, testing for union-represented workers and training specific to the novel coronavirus, among other demands. The university declined that and four other requests to bargain.

Michael Mareno, a student in Political Latinxs United for Movement and Action in Society, asked Pines why the university continues to use student tuition dollars to pay for “anti-union” activity against housekeepers, many of whom are Latinx and Black.

Pines acknowledged that he found the lack of cleaning supplies in the dorms to be a problem when he spoke to housekeepers toward the beginning of his tenure. But, he added that those housekeepers had the PPE and training videos necessary to come back to work in late June and described their concerns as a “natural fear” of what could be in the environment.

“They had to get over those fears, but it’s hard, especially in the communities that you’re talking about where they live, where the incidence of COVID has been high. So it’s been a really challenging time period to communicate, both in Spanish and Haitian Creole and other languages, to our staff, to say that we really care about them,” he said.

Pines said the university has been “working with the union” to solve issues that have been brought forward, and that it is “ready and willing” to work with housekeeping staff to make sure the situation is safe.

The university’s efforts related to racial justice on the campus also played a prominent role at the town hall. In his opening remarks, Pines reiterated the initiatives he announced in a campuswide email on July 1, including the “TerrapinSTRONG” onboarding program, which would be administered to each new student upon entering the university and includes hate bias and anti-racist training.

In response to a question about University Police, Pines said that the university would look at providing a “safe mechanism” where students can report an incident and ask for assistance without contacting the police department.