College Park residents brace for the return of UMD students 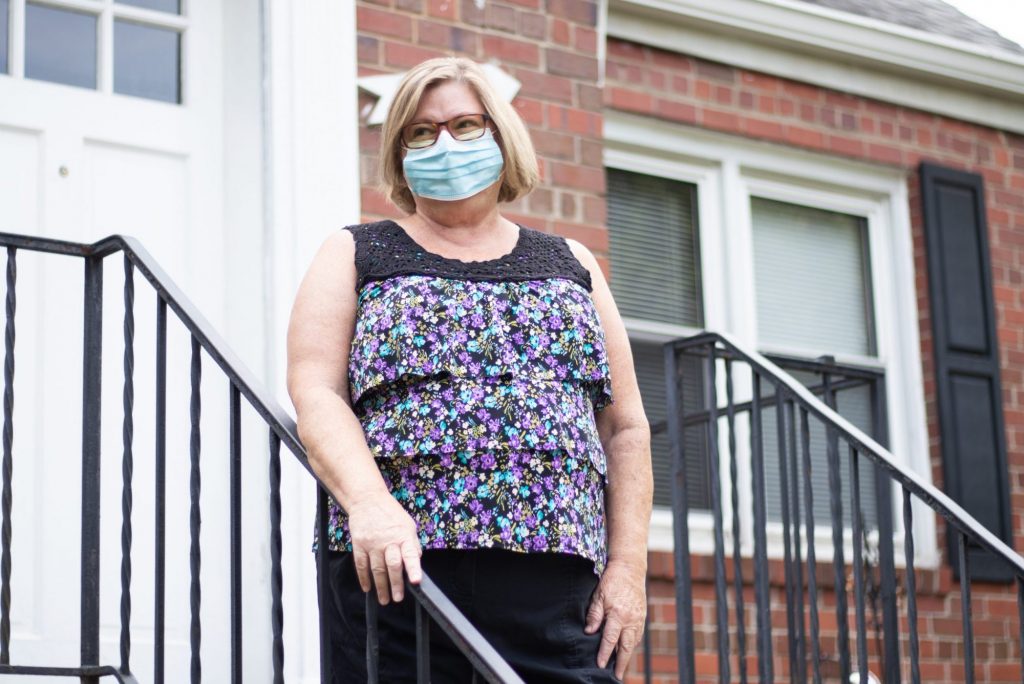 Karyn Keating on Aug. 21, 10 days before classes at the University of Maryland are set to begin. (Julia Nikhinson/The Diamondback)

Christy Dollymore has lived in College Park for 20 years, and the University of Maryland and its students have always been a part of her life in the city.

Normally, it’s fun when summer ends and students return to campus, she said. Locals will head to stores in the area just for the “entertainment factor.”

“You go to the grocery store and the kids are hysterical,” she said. “The girls have all the vegetables, and the boys have every bag of Cheetos in the store.”

But this August is different. In Prince George’s County, more than 700 people have died from the novel coronavirus. Thousands more have been infected. And with the population boom that will come with campus reopening, many College Park residents know what’s probably in store: COVID-19 cases in their community will rise.

It’s a reality that scares Dollymore.

On Aug. 10, university President Darryll Pines announced in-person undergraduate instruction would be delayed until Sept. 14, citing the county’s high positivity rate. Move-in, however, is still happening, and students are beginning to arrive on the campus.

The university is taking precautions to reduce and track the spread of the virus, including requiring students to get tested before and after they arrive on campus. According to the university’s COVID-19 dashboard, the positivity rate for university-administered tests conducted in the week of Aug. 16 was 0.1 percent, a marked difference from the county’s most recently reported positivity rate of 5.2 percent.

However, concerns that cases will multiply as students return persist. The University of North Carolina at Chapel Hill also had a low positivity rate just before its campus opened. According to its student paper, The Daily Tar Heel, the university’s COVID-19 positivity rate was 2.82 percent the week before in-person classes began. The next week, it jumped to 13.6 percent. The school has since pivoted to completely virtual undergraduate learning.

As co-president of the Berwyn District Civic Association, Karyn Keating said she has heard questions from her community about the precautions that will be taken when students return and how the university will handle outbreaks. She’s especially worried about the students who are leaving home for the first time.

Mary Cook, the president of the North College Park Community Association, is avoiding stores students frequent. Instead, she’s been shopping at MOM’s Organic Market and the Greenbelt Co-op Supermarket, which has maintained special hours on certain days for immunocompromised and older people.

“I don’t think many of [the students], not all of them, are really sensitive to the fact that they may not get COVID-19 themselves, but they could easily pass it on to others,” she said.

Positive cases — and pivots to all virtual learning — at other universities have been “measurably linked” to attending large parties and gatherings, Pines reminded students in a campuswide email Thursday.

“We, as a community, will follow a similar fate if everyone does not abide by the County Executive’s and Governor’s strict orders that prohibit such gatherings,” he wrote.

Earlier this month, Prince George’s County Executive Angela Alsobrooks announced further restrictions on social gatherings. Now, gatherings in the county — including house parties at private homes — will be limited to 50 people, or one person or family unit per 200 square feet. Violators could face a $5,000 fine, up to a year in jail or both. County and university police, along with the county health department, will be charged with enforcing the restrictions.

Cook hopes local authorities will step up and crack down on policy violations as students filter back into the area. The university, Keating said, also has the “very serious” responsibility of making sure students follow procedures meant to suppress the spread of the virus.

College Park resident David Dorsch isn’t too concerned about students’ return. He has lived in the city for 45 years and often rents rooms to students at this university. He anticipates that they’ll take the necessary precautions to keep themselves and others safe.

“You got to really wear masks all the time, stay away from other people, that kind of thing, which I do,” Dorsch said. “We’ve always had students here, and they have to take care of themselves.”

Dollymore, however, is worried. There are older people in the community who need protecting, she said, as well as immunocompromised people. But she also knows her new neighbors are coming into town with their own apprehension.

“I believe that they’re just as scared as I am,” she said.