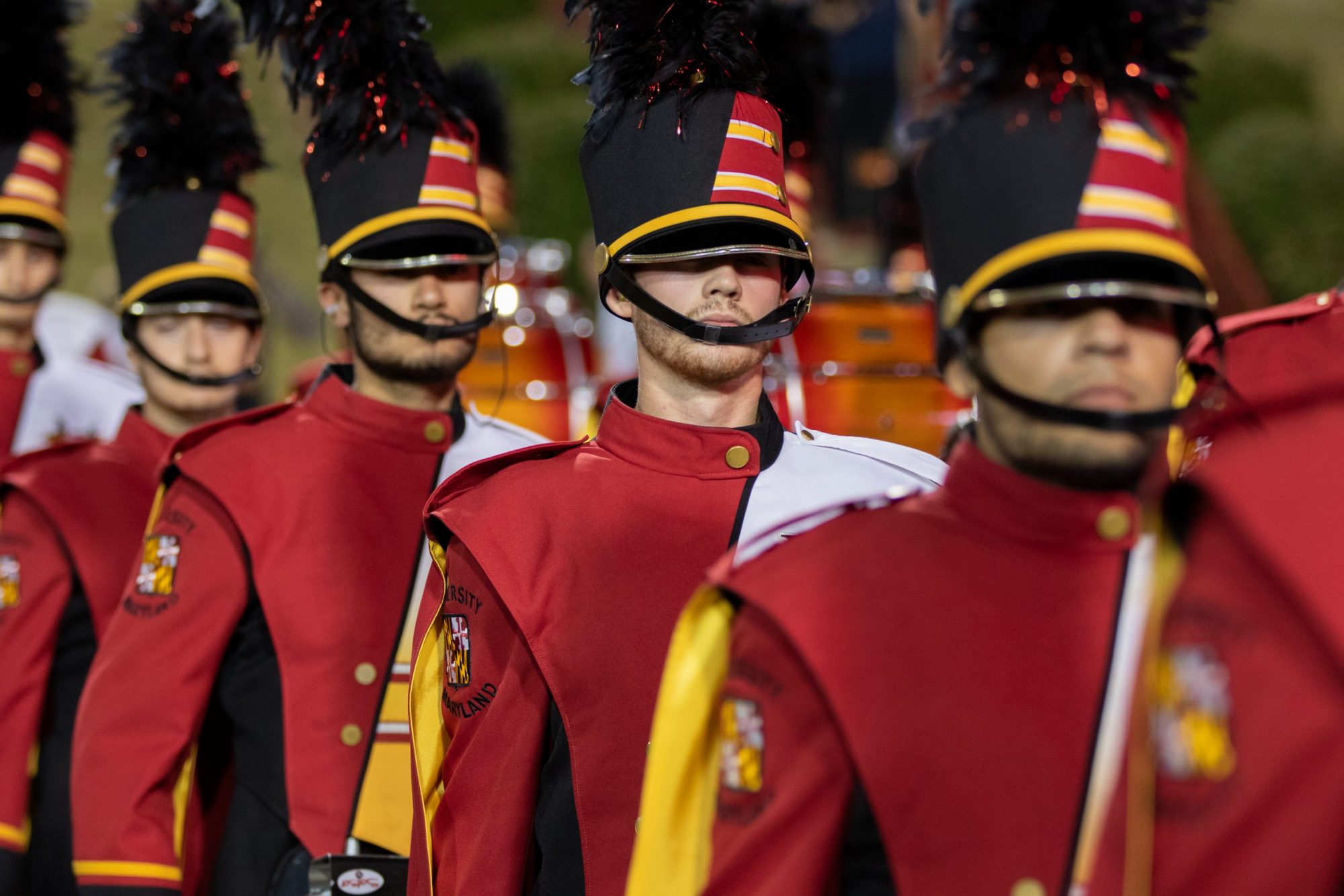 Members of the Mighty Sounds of Maryland prepare to perform before Maryland football's 59-0 loss to Penn State on Sept. 27, 2019. (Cam Andrews/The Diamondback)

On Aug. 11, Garrett Tatano checked his phone to find multiple news notifications. When he scanned the screen, his heart sank.

Through the summer months, drum major Tatano — and his bandmates in the University of Maryland’s marching band, the Mighty Sound of Maryland — were preparing for the upcoming football season.

But things took a turn for the worse when nine student-athletes and staff tested positive for COVID-19 in mid-July. A month later, the season was officially postponed.

“[Our hopes] just essentially got crushed,” said the  electrical engineering major. “The closer and closer we get [to the semester] the further and further we seem to be from that normal [season].”

The Mighty Sound of Maryland is just one of dozens of campus organizations that will have to alter their fall plans due to the COVID-19 pandemic.

Earlier this summer, the university released its “4Maryland” plan, which outlines campus safety guidelines for the fall semester, including wearing a mask, washing hands frequently, maintaining social distance and staying home when sick.

Based on the guidelines, clubs started to plan what the fall semester could look like, but the new campus environment will present unique challenges for each organization.

The Ultimate Frisbee team, for example, was allowed to design their own plan for the fall semester, with the expectation that the plan would follow CDC and state guidelines and be reviewed by University Recreation and Wellness.

The team’s proposed plan is to practice in small groups, with only students who were already living together coming in close proximity, said captain Daniel Friedman-Brown. Many players in the tight-knit group already live together on the campus.

“Community is everything,” the rising junior marketing and psychology major said. “It’s so much more fun and you want to work so much harder if your teammates are also your best friends.” These bonds are especially helpful now that the team is essentially quarantining together, Friedman-Brown added.

The club will also follow socially distanced drills put out by USA Ultimate and hopes to get frequent coronavirus testing, he said.

There will be some losses they can’t get back, though.

With all conferences canceled for the semester, the club will not be recruiting this fall, Friedman-Brown said. In total, the club has 80 to 90 members split into two teams, and it wouldn’t be able to train new members under the new guidelines.

WMUC has been off the air since March, when the closure of the campus left them with no way to broadcast. And when they did get approved for remote equipment, they weren’t able to pick it up until the campus reopened, WMUC program director Madeline Redding said.

Now, they’re back, but the WMUC studio won’t be the beloved hangout spot it normally is, and its record library will be closed, Redding said. All furniture will be reconfigured for social distancing and only students broadcasting from the studio will be allowed in.

Despite the loss of their hangout spot, along with other changes in show scheduling and connecting with listeners, Redding sees some of the adjustments as positive.

“I think this is like a challenge for us to see what in our operations are our values and what our strengths are and where our weakest links are,” said Redding, a rising junior theatre major.

[Zoom juggling, debates and book clubs: A look at how UMD orgs are connecting amid COVID-19]

Big Brother Maryland, a club that allows students to compete in a game show modeled after CBS’s Big Brother, is also hoping to rise to the challenges that COVID-19 will bring. It’s planning on going in-person for the fall but preparing to move to a hybrid format if necessary, said Bailee Richman, the club’s president.

Along with smaller, mostly outdoor meetings, players will practice social distancing, wearing masks and using hand sanitizer, Richman said. They will also have to provide a negative COVID-19 test result to participate.

“We’re just trying to make it our best effort to make this club fun, because if you’re not having fun, then there’s no point in doing it,” said Richman, a rising junior nutrition and food science major.

As for the Mighty Sound of Maryland, it’s still got a lot to figure out.

Though the marching band will practice in small groups this fall, it’s still unclear how the group will work if the football season is moved to the spring. They’re hoping to perform in small groups around the campus, put on virtual performances and offer virtual membership to students who don’t return to the campus.

While Tatano said he is nervous for the fall, he knows that the marching band will persevere. Whatever happens, they’ll remain together and support one another, he said.