Zoom juggling, debates and book clubs: A look at how UMD orgs are connecting amid COVID-19 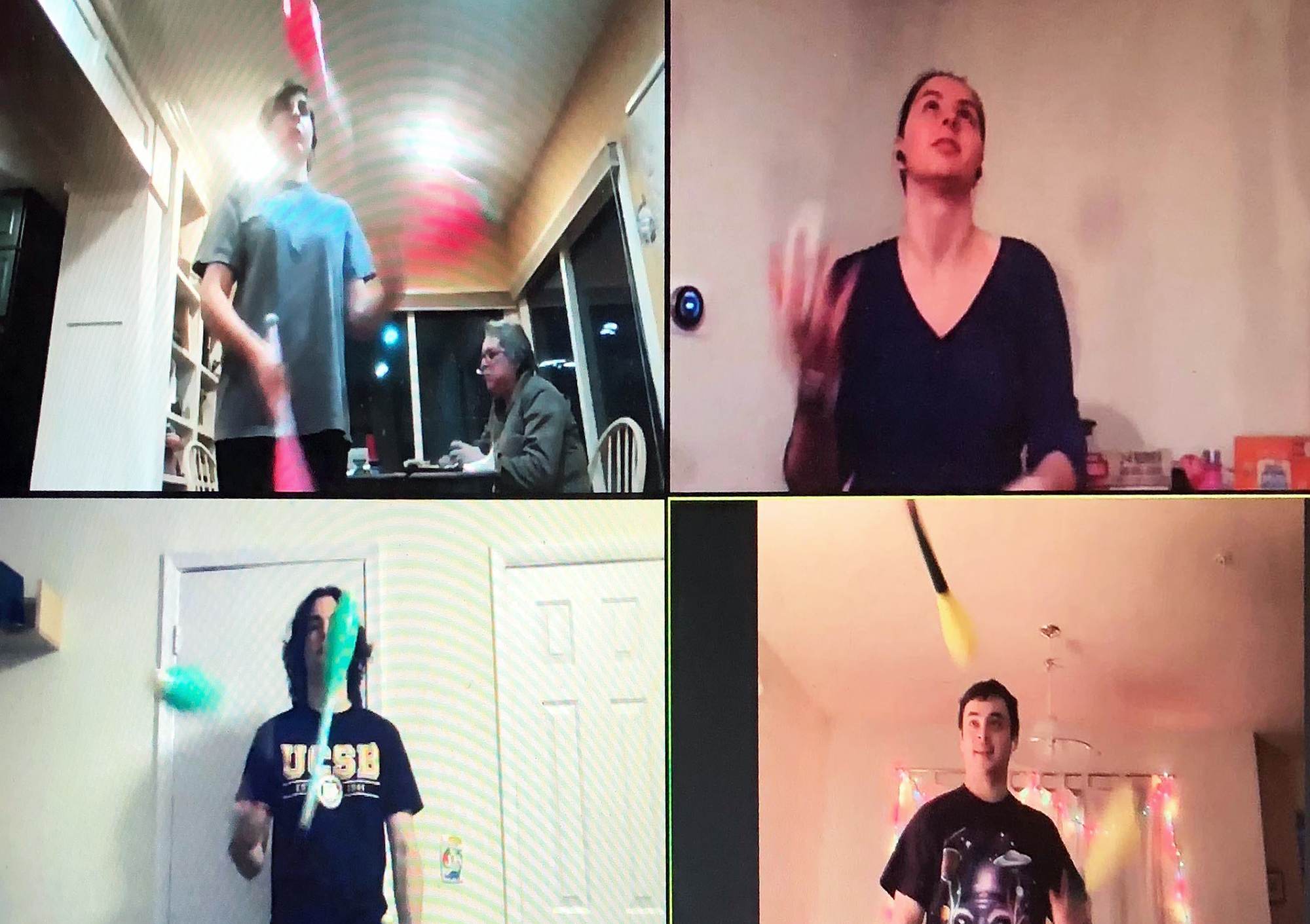 Due to the coronavirus pandemic, members of the University of Maryland's Juggling Club can no longer meet in person. (Chloe Goldberg/For The Diamondback)

The University of Maryland’s Juggling Club is pretty good at keeping things moving. They have to be. And social distancing doesn’t change that.

When the group found out that classes would be online for the rest of the semester to prevent the spread of the coronavirus, they got creative. Now, instead of meeting two days a week in front of the Edward St. John Learning and Teaching Center, they practice over Zoom — with or without their usual equipment.

“The first week, we were all juggling hand sanitizers and Lysol,” said Kaitlyn Davey, a senior food science major and the president of the Juggling Club.

As the campus remains closed and students isolate at home, Davey and other club leaders have been grappling with the same question: What happens now?

Some had been planning major events for months, only to have them postponed to the fall or canceled. Others have struggled to adapt their team-based clubs to an online format. Many have been forced to cancel spring activities altogether.

But in the midst of disappointment, there are solutions: Zoom conferences, movie clubs and Instagram livestreams, to name a few. There’s a need to keep connected, even while far apart.

Here’s a look into what a closed campus means for different university clubs, and how they’ve brought student life into their homes.

Their practices in front of the St. John Center are hard to miss — about a dozen students, armed with neon juggling clubs, diablos and unicycles, coming together to practice their craft and learn new tricks every Wednesday and Friday during the semester.

“Anything mildly juggling is the juggling club,” said Abigail Brodsky, a junior geology major. “So we get unicycle, we get acrobatics people … yo-yo … kendama … basically, it’s kind of anything goes.”

Though club members can no longer practice their complex passing routines in person, the pandemic hasn’t taken away their passion. In addition to weekly Zoom meetings, members are competing in Instagram challenges — each must learn a new trick weekly, and if they fail to showcase their skill on the group’s profile before the week ends, they get one step closer to elimination.

The challenges have been motivating Davey to learn tricks she’s been putting off, she said.

But she’d much rather be planning for the “Congress of Jugglers,” an annual event hosted by the club.

For one weekend in May, hundreds of local jugglers gather at Ritchie Coliseum for a series of circus workshops, culminating in a live passing routine by club members. The event’s been running for over 20 years, and it’s a large source of revenue for the small organization.

With gatherings put on hold, the Juggling Club was forced to cancel this year’s “Congress of Jugglers.” To make up for lost profits, Davey has been selling Juggling Club merchandise on Facebook.

Before the pandemic took away his last semester with Theta Tau, David Boutin, the fraternity’s president, helped the organization raise $11,000 in corporate sponsorships and donate $6,500 to charity.

It had been a busy year for the fraternity thus far, and the last few months of the spring semester would’ve been no different.

This year was Maryland’s turn to host the Theta Tau Atlantic Regional Conference, an annual event bringing different chapters together from across the East Coast. Boutin’s chapter had been planning the two days of programming for months. Incoming university President Darryll Pines, who currently serves as the engineering school dean, was set to speak at the event.

“When we got the news that we weren’t coming back, the concern was mainly focused around regionals, because we had over 225 people coming from eight different schools … getting the refunds, figuring out a new date … in the fall … that was a lot of work,” said Boutin, a senior electrical engineering major.

With the conference now postponed until the fall, Boutin will no longer be able to oversee it as president. However, he plans to pursue his master’s degree on campus in the fall and will still be able to attend the conference.

Meanwhile, day-to-day operations for the fraternity have moved to Zoom, where biweekly meetings bring together its 84 active members. After sorting out official business, members break out in small groups and compete in online games such as Pictionary and Codenames, Boutin said.

To keep up with each other while the campus is closed, the fraternity has also created various “media clubs.” Each week, members are sorted into different groups — one for movies, TV shows, books and music — and meet to discuss what they’ve read or watched.

Boutin suspects that members will be able to settle right back into typical fraternity business as soon as the campus opens up again.

“It’s definitely going to pick up right where it left off, just knowing who our members are,” he said. “Once we have our first in-person meeting, it’s going to be like no time has passed, and things are going to go back to normal.”

If you were to drive around the campus right now and tune your radio to 88.1, you’d hear replays of long-forgotten radio shows hosted by student DJs. Without access to their equipment on the third floor of the South Campus Dining Hall, WMUC is unable to broadcast live.

They’ve received funding from the Student Government Association for remote broadcasting equipment, but because the Student Organization Resource Center has suspended physical purchases for shipment to the campus, it’s unclear when they’ll be able to run live shows again.

The station’s main concern is how to support student DJs who fill the airwaves, and the website, with music and commentary during the regular semester, said business manager Anders Julin.

“Our main process is trying to figure out how the community can still stay together and stay engaged while we’re all physically separate,” said Julin, a junior information systems and operations management and business analytics major.  “A large part about what’s great about the WMUC community and the WMUC station is we have a good space on campus where we can all meet up and talk in real life.”

To keep that community together during the pandemic, the radio’s social media team is launching a new Instagram Live campaign to highlight their DJs. Students will be able to livestream their shows, show off their home record collections and give out “quarantine tips” through the platform, Julin said.

Some DJs have taken to recording their shows on their own time, and uploading them to SoundCloud, YouTube and Spotify, he said.

As a public radio station, being unable to broadcast for a prolonged period of time also comes with legal concerns. The Federal Communications Commission outlines certain requirements for these FM stations — broadcasters have to say the station ID at the top of each hour, and stations must offer some sort of programming for a minimum amount of time each day and week.

This was cause for concern at first, Julin said, but the FCC has since relaxed those requirements for college radio stations because of school closures.

Though the future is uncertain, Julin and the rest of the WMUC staff are planning ahead, working on organizing more social events once they can meet up back at school.

“The great privilege of WMUC is just the community that we have, all the people that are there, everybody’s so passionate about something,” Julin said. “Being able to see everyone again and jump back into the momentum that we had before … I think that’s definitely what I’m looking forward to most.”

Debate is a sport that requires communication and teamwork. That’s a bit harder to control when there’s 40 voices on a Zoom call. But the Maryland Parliamentary Debate Team has made it work since classes went online, teaming up with other college teams from around the country to keep up some semblance of its normal debate season despite the pandemic.

During a typical semester, the team meets twice a week for two-hour sessions in Jimenez Hall, discussing potential debate topics and competing against each other in preparation for their weekend tournaments with other college teams from the American Parliamentary Debate Association.

Their weekly routine came to a halt when, two weeks before the university announced a permanent shift to online learning, the debate association canceled all tournaments for the rest of the semester.

Though she knew the cancellation was coming, it was still a letdown for the team members, who have become close outside of debate, said Caitlin Bourke, the club’s historian.

“I think a lot of us have just become really good friends, and are friends with people on other teams, and it’s kind of hard to stay in contact with them if you’re not continuing a bit of normalcy,” said Bourke, a sophomore government and politics major.

There was a silver lining, however: since the season ended, a student on Columbia University’s debate team has created a platform for students across the association to continue debating. About 20 teams, totaling 40 players, gather regularly to debate more informal topics, Bourke said.

The online meet-ups are usually audio-only, she said, which makes it difficult to see whether a person is trying to raise their hand or get others’ attention. But it also leads to less biased judging, Bourke said, as judges can’t make their decisions based on a debater’s appearance.

In between those debates, the team has been getting together in other ways, through Zoom calls and group chats.