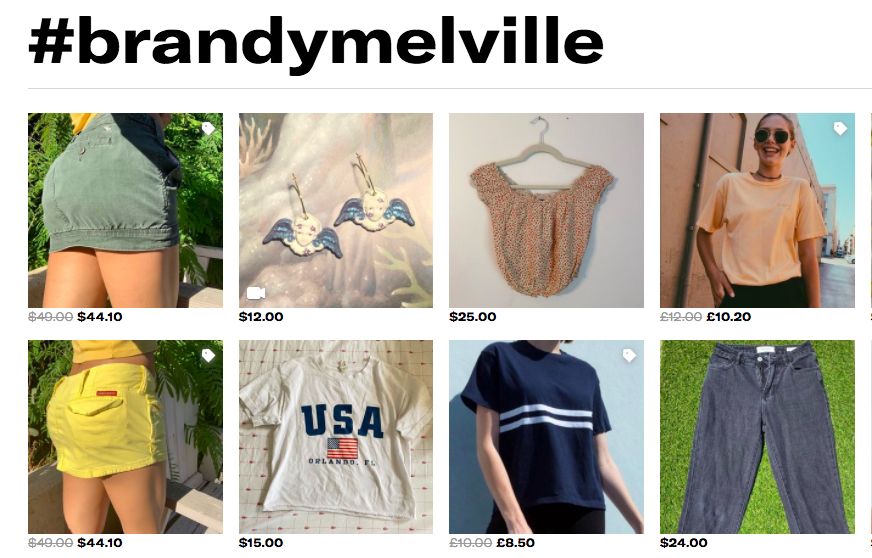 The search results for Brandy Melville on Depop. (Screenshot via Depop)

Brandy Melville, an Italian clothing company known for its one-size policy, has reached a new level of popularity during quarantine. And this time, it’s not on its website, but on the popular secondhand marketplace, Depop.

With many brick-and-mortar stores temporarily closing due to the coronavirus pandemic, the use of apps like Depop has skyrocketed — and so has the popularity of Brandy Melville apparel.

Brandy Melville culture on Depop is somewhat of a rabbit hole. There are sellers simply trying to empty their closets, sellers around the world offering buyers access to different styles and colors than what’s in their home countries, and sellers who tag their Brandy items as “rare” and charge exorbitant prices.

Competition is steep for these “rare” items, which have been deemed such because they’re out of stock on the store’s website at the time or no longer manufactured. And this competition almost always results in a higher price tag, with some sellers essentially auctioning off items by having potential buyers sound off with their highest offers in the comments.

One coveted sweatshirt simply referred to as the brown Rough Rider — which originally cost about $40 — was priced at a whopping $350. The competitiveness for these pieces of fast-fashion clothing creates a catty atmosphere that resembles the behavior of hypebeasts lining up for hours on end at Supreme locations around the world at the chance of owning a box logo.

It’s easy to ask, what’s all the hype? With Supreme, you could argue its roots in skateboarding and counterculture have carried it, along with multiple creative collaborations with notable brands such as Louis Vuitton and The North Face. But for a company like Brandy Melville — whose founders have very little online presence, don’t use advertising and are infamously known for having limited size options — the hype is because of one thing: fitting in, figuratively and literally.

Brandy isn’t trendy because it puts out creative limited edition pieces deserving of the term “rare.” It’s controversially trendy because of gatekeeping. Brandy Melville pants fit a range of 23- to 27-inch waists, and most of its tops measure from extra-small to small.

People aren’t buying into Brandy Melville because of  embroidered butterflies and sweatshirts that say “Georgetown” or “Los Angeles.” They’re buying into the ideal of teenage female beauty standards — the ideal of thinness.

[In-person fashion shows can wait until COVID-19 is over.]

All of this culminates on Depop, of all places. With a trendy layout similar to Instagram’s, the platform feels more accessible than other secondhand apps. You can bookmark, like and comment on items, which at some times makes it feel more like social media than a place to sell clothes — and fosters the environment of flex culture. No one is flexing Forever 21 or Topshop, but because of Brandy Melville’s exclusivity and editions of designs only being available in certain countries, it’s become a game for people to collect every item. Collection posts flood the searches where “don’t know if I’m selling, send HIGH offers!” captions are the norm.

Depop has become a playground for teens looking to fit into not only Brandy Melville clothes, but also the lifestyle of a “Brandy girl” who exudes carefree confidence and has a thin waist.