In Silver Spring, hundreds marched for Black Lives in a protest powered by UMD alumni 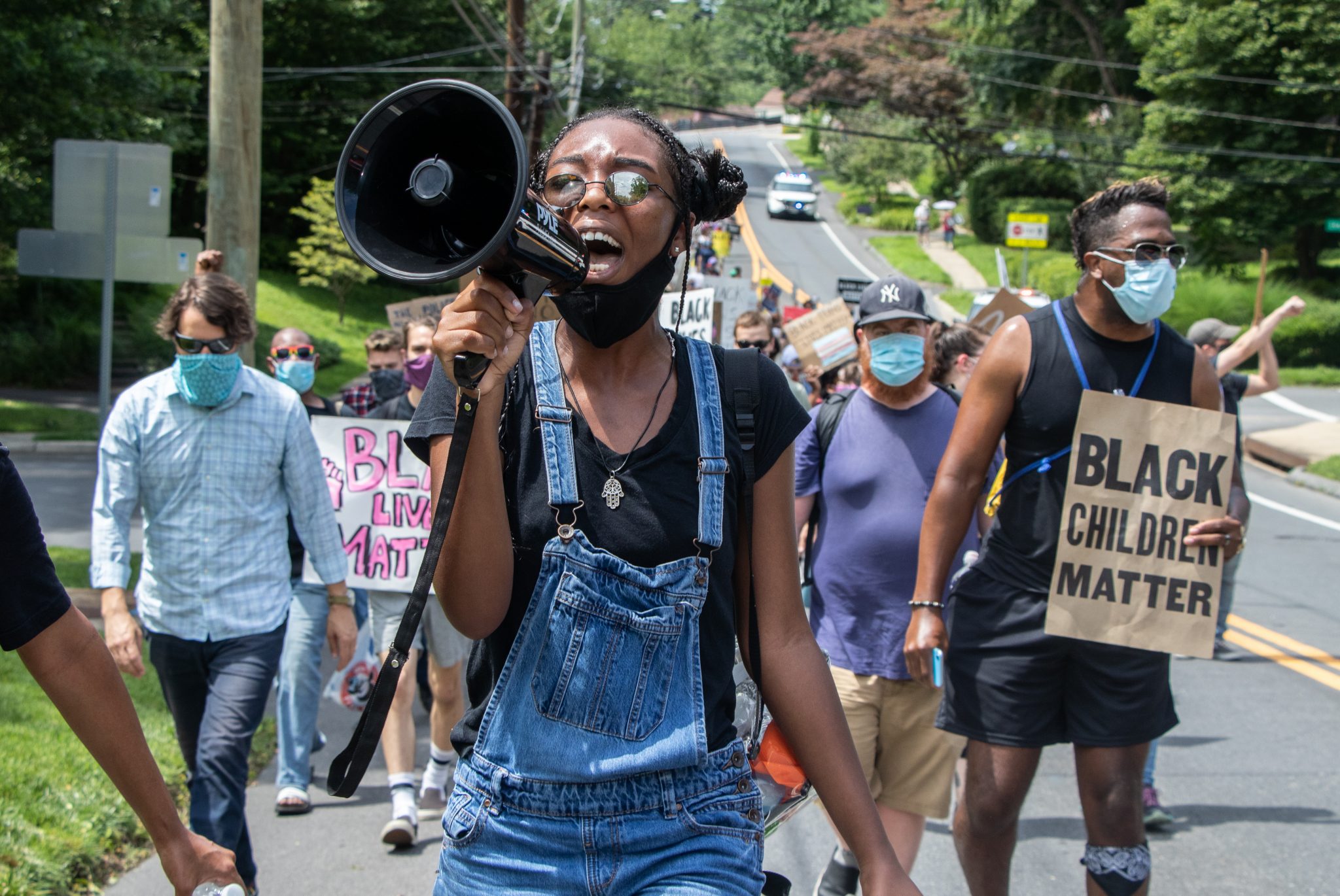 Hunter Jones, an alumna of the University of Maryland and a co-organizer of the protest, leads demonstrators in chants in Silver Spring, MD. on June 28, 2020. (Julia Nikhinson/The Diamondback)

SILVER SPRING — Horns blared, families decorated posters and hundreds gathered in downtown Silver Spring Sunday at a demonstration calling for the end of systemic racism and police brutality — all led by two University of Maryland alumni.

With hundreds of demonstrations unfurling in cities across the world in response to the police killing of George Floyd, a 46-year-old Minnesota Black man, alumni Hunter Jones and Karylena Cruz decided to organize one of their own.

At its peak, about 200 local residents gathered in front of the city’s Civic Center to show solidarity with the Black community.

“If we want to make a difference in our community and start to make structural changes, we have to continue to fight and continue to break that silence and bring awareness,” said Jones, who graduated in May with a degree in geographical sciences.

For Cruz, who graduated in May with a government and politics degree, this protest was an opportunity to not only spread awareness but to also encourage attendees to take action on their own.

“Instead of … posting on your Instagram story, you need to be emailing representatives, calling your representatives, your senators, your state senators and delegates and hopefully … this will inspire someone to hold their own protest next week.”

Fisher, a 2010 graduate of this university who also spoke at a Black Terps Matter protest Thursday, emphasized that people need to make themselves uncomfortable and look at their privilege “every single day.”

“It’s going to take that in order to move forward, and so our children don’t have to be discussing the same things over and over again,” she said.

After about eight people spoke, Jones and Cruz took charge of the march, leading the throng of protesters through the streets of downtown Silver Spring, chanting phrases such as “Black Lives Matter” and “No justice, no peace.”

On Ellsworth Drive, community members who were taking their dogs out at a local dog park stopped what they were doing, joining in with the chants and raising their fists in solidarity.

As the protesters passed, the dogs could be heard barking in the background, as if echoing their owners’ support of the movement. A man with an “I Stand With U” sign stood nearby, filming the protesters as they took their demands to the city’s quiet residential neighborhoods.

One family, hearing the chants of the passing protesters, came out of their house, raising their fists and signs in solidarity with the protesters. Other residents simply sat in their cars, honking in support of the demonstrators.

Throughout the march, Alfonso Brown, a native of Brazil who now lives in Bethesda, was at the forefront. Brown said that after seeing the video of Floyd’s death, he “needed to be part of the revolution.”

“It’s definitely a cultural shock,” Brown said. “In Brazil, we all want to come [to the United States] because … you get to have the opportunity to have the American Dream, to live in Hollywood, be famous. So the fact that I’m here and I get to see firsthand what [a protest is] like … it’s a different perspective for sure.”

As the demonstrators made their way back to Veterans Plaza, Jones and Cruz asked protesters to silently take a knee in solidarity with all those killed at the hands of police.

But to some in attendance, the protest went far beyond the recent killings of Black people.

Brody Harless also graduated from this university in May with a degree in kinesiology. Although she has been friends with Jones and Cruz since fourth grade, she attended the protest as an ally of the Black Lives Matter movement.

Harless, who is white, said it is important for white people to hold each other accountable and let Black people lead the conversation.

“We have to use our privilege to amplify Black voices and not take over the conversation,” she said. “Being an ally is a never-ending process.”

Elizabeth Hughley, a senior information science major at this university, spoke at length about her experiences with institutional racism at the university. Like many others in attendance, she expressed anger at the fact that racist experiences such as her own were still prevalent and that Black students were being held back simply because of their skin color.

“When you’re in class and you feel like you don’t belong because you’re surrounded by all white men and you’re the only woman there, it takes a toll on you,” she said. “It was time for change years ago, and it’s still time for change.”