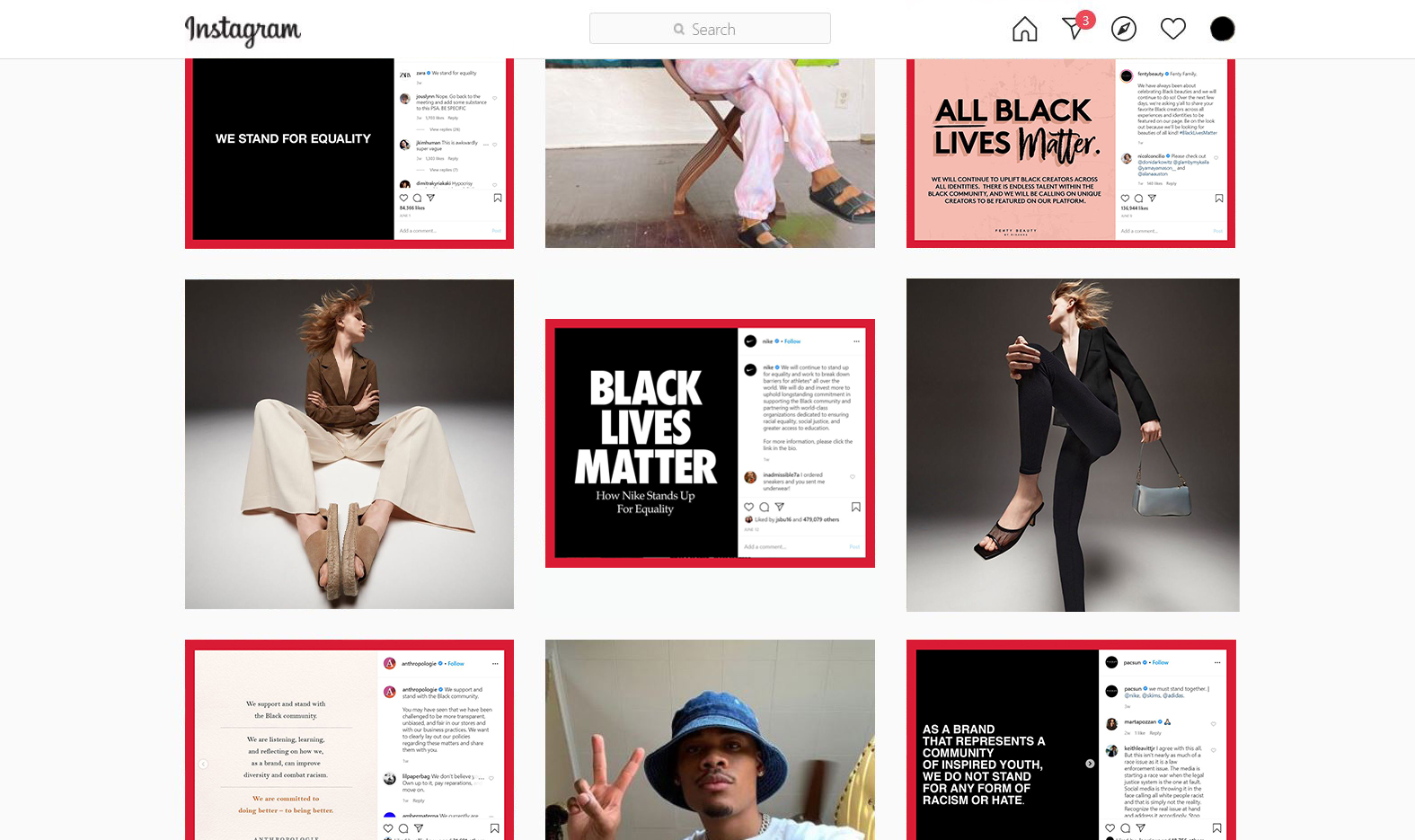 We are not living in the same world we started 2020 in, but you already knew that. Protests continue across the country in the wake of George Floyd’s killing. Important conversations about police brutality, systemic racism and the Black Lives Matter movement are a part of American daily life.

The United States is at a moment of reckoning, and social media has played an important role in allowing people to see who is taking action and who is not. However, we must remember an Instagram story is not concrete evidence of how “woke” an individual or brand is. Many amazing actions never even reach the internet. During such a volatile time, it is important to have the facts.

Still, people are contributing in a variety of ways online and encouraging their family and friends to actively fight against racism. And their favorite brands are not exempt from scrutiny.

In recent years, brand accounts across social media have taken on different personas. We sometimes cringe at Denny’s or Netflix’s desperate attempts to go viral, but our expectations for their online conduct are now stricter than ever. If they act like normal people, they are at risk of losing followers for ignorant behavior like everyone else.

There is pressure to be on “the right side of history,” but the stakes are higher for corporations. A 2019 study reported 74 percent of consumers think brands should take a stand on political and social issues. The majority of people agree that it is worse for brands to stay silent during this time, no matter how divisive their statements may be. Brands need to speak out to stay alive, especially since younger generations are more conscious shoppers.

This pressure has worked, to some degree. Many companies have donated to causes and shared resources. Countless posted black squares to their Instagram feeds for Blackout Tuesday. These have been productive acts of solidarity for some and weak moments of “performative activism” for others. Rather than actually devoting their energy or money to a cause, some posted out of perceived obligation.

We cannot tell based off of social media alone which brands genuinely support BLM and which just want to please consumers. However, their accounts give consumers some pretty clear clues.

A white-washed feed has always been an indication that racial representation may not be a priority for a company. Though clothing retailer Anthropologie posted a black square and other BLM content, it has only sporadically featured Black women and other women of color on its Instagram. The company has also recently been accused of racially profiling customers. Given the context, it’s hard to see those posts as genuine support.

Compare Anthropologie with Rihanna’s Fenty empire. Rihanna has long been at the forefront of the discussion regarding racial representation in the fashion and cosmetics industries — and her brands prove that. Many different identities have been represented on the Fenty Beauty and Savage X Fenty accounts, far before Blackout Tuesday. Rihanna also paused operations on June 2 and donated to the cause.

Of course, people are growing and educating themselves during this time. It’s possible that some brands — especially smaller companies — were unaware of their impact prior to Floyd’s death. (That only proves how important representation is — but that’s a separate discussion.) How their online presences change in the wake of Blackout Tuesday and as the protests continue is even more significant.

Spanish retailer Zara posted “we stand for equality” on June 1. Three black squares remain as a banner on its Instagram page. However, its current posts show the same models. No additional actions were visibly taken. Just based on their social media presence, there is no indication that their solidarity post truly meant anything.

Users have also criticized people and companies that have posted “normal” photos in the weeks following Blackout Tuesday. Momentarily posting BLM resources and then quickly returning to regular content is not satisfactory for some who discourage brands from “checking the box” with a few posts about Floyd instead of larger actions.

PacSun’s feed appears a bit more diverse, but its BLM posts are buried under rows of product promotion. Meanwhile, Levi’s and Nike’s accounts look different. Levi’s continues to post resources and amplify Black voices, and Nike hasn’t posted on Instagram since its post about how it’s standing up for equality on June 12. Both brands are known for taking concrete action in multiple social justice causes. Nike even stood by Colin Kaepernick years ago.

Clearly, there is no meaning behind posting a black square if brands do not intend to show more Black faces moving forward. If people can spot Facetune fails, they can definitely see through fake solidarity posts. Black beauty is not a “trend” for clothing companies to capitalize on, and consumers will react negatively if BLM is treated as such.

Ultimately, actions beyond the screen are the most important. We are all learning and growing right now, and companies that do not do the same will be forgotten.