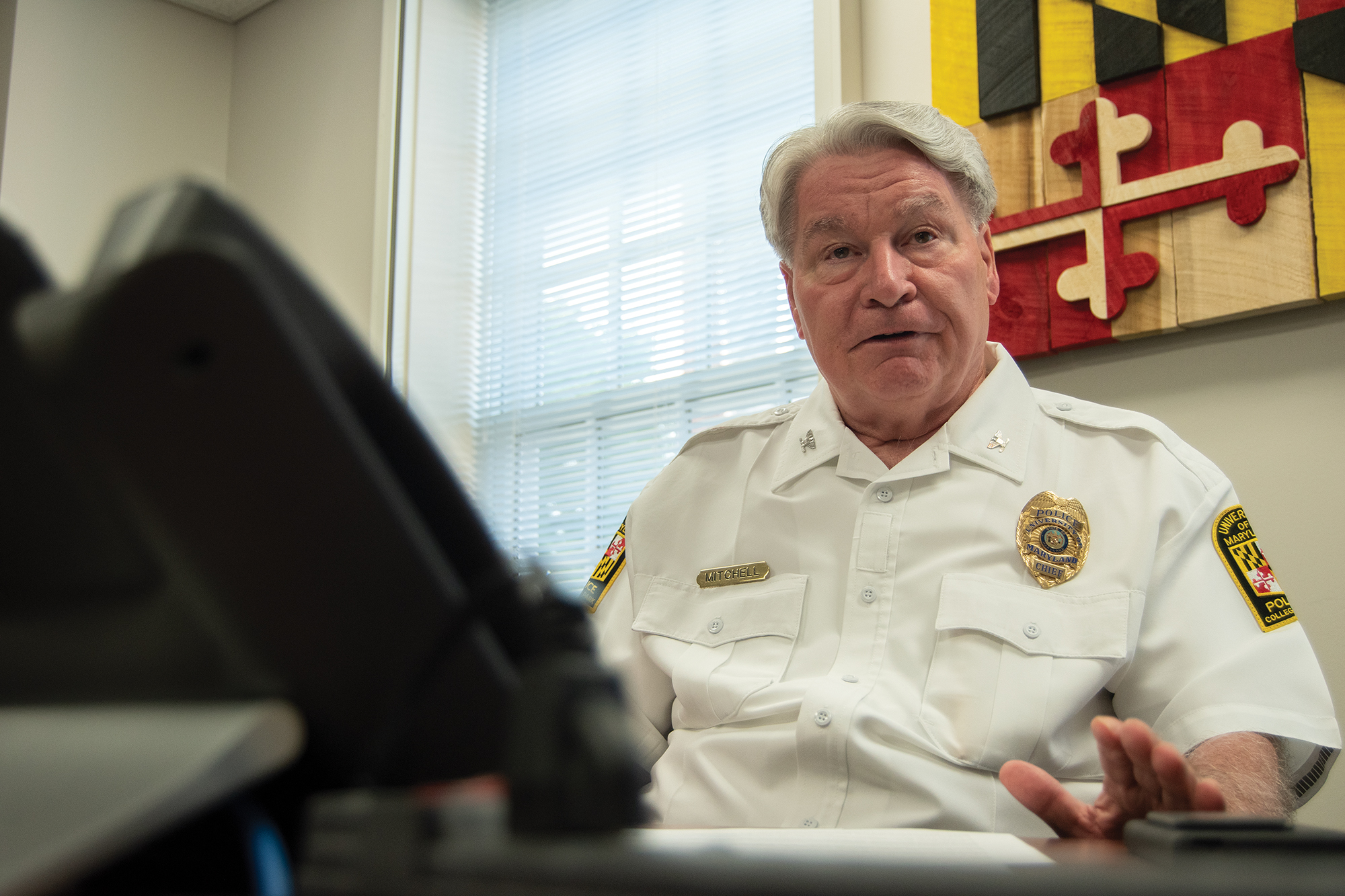 University of Maryland Police Chief David Mitchell in his office on May 9, 2019. (Joe Ryan/The Diamondback)

As protests explode across the country in response to another police killing of a Black man, a Defense Department program that provides surplus military equipment and supplies to local police departments has come under renewed scrutiny.

Earlier this month, U.S. Sen. Chris Van Hollen (D-Md.) and two of his colleagues introduced legislation aiming to bolster transparency in the program, commonly known as the “1033 program.” The bill would also bar the transfer of offensive military-grade equipment to state and local law enforcement agencies and require the return of prohibited supplies.

The University of Maryland hasn’t been excluded from this national conversation. Recently, students and alumni alike have spoken out against University Police’s participation in the program, with one tweet about it garnering hundreds of likes and retweets.

But University Police Chief David Mitchell says the department’s involvement with the program has allowed it to acquire equipment it needs to keep the campus safe without taking funds from an already tight budget.

Under the program, University Police have received two 7.62-millimeter rifles, which are used by the university’s honor guard at basketball and football games, and two utility trucks, which are meant to serve as emergency rescue vehicles, Mitchell said.

However, Mitchell said the department has returned — or is in the process of returning — some of the equipment it has received under the program over the years, including 25 5.56-millimeter rifles, 16 12-gage shotguns and an armored truck.

In the ten years Mitchell has been police chief, he said the department has never once deployed the armored truck, which he said was meant to serve as an emergency rescue vehicle. The department can barely afford to maintain it, he said, and it’s hardly mobile. However, he added that, in his estimation, the vehicle is a “very needed piece of equipment.”

Mitchell reaffirmed his commitment to community policing, saying if students are in favor of dismantling the program, “so be it.” However, he said, even if the department returns all equipment it has received from the program, he’ll have to continue answering questions from parents who are concerned about the university’s ability to respond to an active shooter situation.

“People expect us to be prepared,” he said. “Being prepared means having the right equipment and the right training.”

Katie Wilson, a 2019 graduate from this university who still lives in the College Park area, called the department’s efforts to return the shotguns and the armored truck a “step in the right direction.” After seeing how police across the country responded to recent Black Lives Matter demonstrations — at times releasing tear gas and arresting peaceful protesters — Wilson said her biggest concern was that University Police would use similar tactics to respond to protests on campus.

However, she said, the equipment the department still possesses seems “excessive.” Last week, she started a petition calling upon the university to defund and reform its police. Along with requesting that the university get rid of the “military grade gear,” Wilson is also asking that it create a law enforcement degree program and invest in more mental health personnel for the campus.

Following these suggestions would help increase student trust in the police department and make it something that isn’t feared, Wilson said. Plus, she added, people often point to mental illness as the reason behind an active shooter’s actions. So, she asked, if the university wants to protect students from such a situation, shouldn’t it direct more funding toward mental health services?

“Why aren’t we putting that energy and focus on mental health programs instead of guns?” she asked. “The way I see it, you can’t really have it both ways.”

Tania Otero Martinez, a rising senior criminology and criminal justice and public policy major, voiced concerns similar to Wilson’s. Along with eight other Resident Assistants in Elkton Hall, she recently started a petition to end University Police involvement with the Department of Resident Life — a step she says would make the campus a safer place for students of color, including Black and Indigenous students.

In the same vein, she said she supports the “demilitarization” of the University Police.

“There’s plenty of police departments across the country that don’t have access to this, and they feel like they keep their people safe,” she said. “Why are we choosing to implement it in our institution?”

This isn’t the first time the university’s involvement with the 1033 program has generated backlash. Six years ago, when videos of the militarized response to protests in Ferguson, Missouri, brought the program under a national spotlight, students mobilized on campus to call for University Police to return all weapons they had received under the program and replace them with non-lethal ones, among other demands.

Now, Dan Alpert, Student Government Association president, said the governing body is researching the school’s participation in the 1033 program, and has been in talks with University Police to ensure the equipment they have is “what we need and nothing more.”

“We really want to ensure that we are demilitarizing our police department and keeping our students, especially our underrepresented students, safe,” he said. “We want to make sure that our students are feeling safe, is the bottom line, and anyway that we can do that is what we’ll be doing.”