Students are flocking to virtual summer classes amid the pandemic 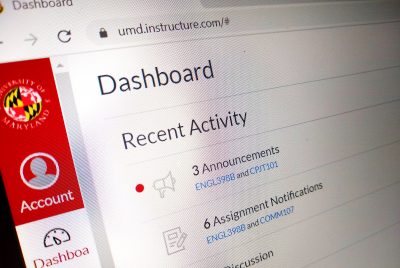 As the COVID-19 pandemic shifts in-person classes to an online environment, several academic departments at the University of Maryland are seeing a significant jump in summer enrollment in lower-level courses compared to last year.

With more students leveraging the opportunities afforded by the pandemic to get ahead in their studies, some professors expanded the number of seats available in their courses to meet the higher demand.

This year, enrollment in 100- and 200-level summer classes increased by an average of 27 percent, according to The Diamondback’s analysis of enrollment numbers from 2019 and 2020.

“Generally, it seems this is a trend that universities are seeing across the U.S.” said Anne Baum, the associate director of summer and winter sessions and undergraduate programs in the Office of Extended Studies.

The Office of Extended Studies halted marketing for summer classes April 8, Baum said — about 12 weeks earlier than normal. But the percentage of visiting students — students who attend other schools but enroll in summer classes at this university — remained the same at about 5 percent, she added.

Of the courses included in the analysis, 95 percent are being held virtually, compared to only 50 percent of the same classes last summer. All courses currently scheduled to meet in person this summer are not starting until the latter half of this summer. Classes that transitioned from in-person to online learning saw an even higher average increase in enrollment at 54 percent.

[UMD to hold the first round of summer classes online]

One of the courses to see the largest enrollment increases is ANTH222: Introduction to Ecological & Evolutionary Anthropology. While only 14 students enrolled in the course last summer, enrollment was up to 66 students this year as of Friday, a more than 300 percent increase.

Miguel Vilar, a professor in the anthropology department, is teaching two of the course sections this summer. He said he thinks students are attracted to the course since it fulfills two General Education requirements.

While Vilar did not teach this course in the spring when classes shifted online, he said he spoke with several professors in the department to figure out how to teach the class online. The team chose to teach the class asynchronously, so students can complete class activities on their own time.

“Asynchronous classes give a little more freedom and the students seem to enjoy it more,” Vilar said.

Keith Mills, a third-year doctoral student in the math department, will also be teaching an asynchronous class this summer — one section of MATH246: Differential Equations for Scientists and Engineers. This course saw a 79 percent increase in enrollment since last summer — from 66 to 118, as of May 29.

The math department opened up another course section after two sections, including Mills’, had waitlists of about 10 students. Still, Mills said the increase was unexpected.

“I was surprised to hear about the increase since I feel like differential equations are always kind of a high demand for students in STEM fields, like engineering and physics,” he said.

The North American Association of Summer Sessions recently distributed a survey to universities across the U.S. to better understand their enrollment data this summer.

In an emailed statement, Patricia Suske, the chair of NAASS’s quality and research committee, universities attributed the rise in enrollment to a number of factors, including a lack of student employment opportunities and the increased availability of virtual classes.

Yash Mehta, a rising senior aerospace engineering major at this university, has enrolled in an introductory ethics class at Rutgers University this summer. After Mehta’s internship start date was pushed back two weeks, he said he wanted to make the most of his summer. Mehta, who lives in New Jersey, said taking a class at Rutgers, a state school, would be cheaper than taking a summer class at this university as an out-of-state student.

“I had like, one humanities requirement left, and I didn’t want to push it until next year, so I took it upon myself to take a class at Rutgers,” Mehta said.

Catie Dommers, a rising junior enrolled in letters and sciences, plans to transfer into the engineering school. She is using the summer to help her fulfill requirements; with these prerequisites under her belt, she’ll be able to start taking advanced engineering classes sooner.

In addition to her summer coursework, Dommers said she is also working at a grocery store and a shop that sells equestrian equipment. But she has experience balancing all of these responsibilities already, after taking summer classes at a community college last year.

“For me personally, it is a lot more accessible to be on this nice screen porch doing the work by myself,” Dommers said.