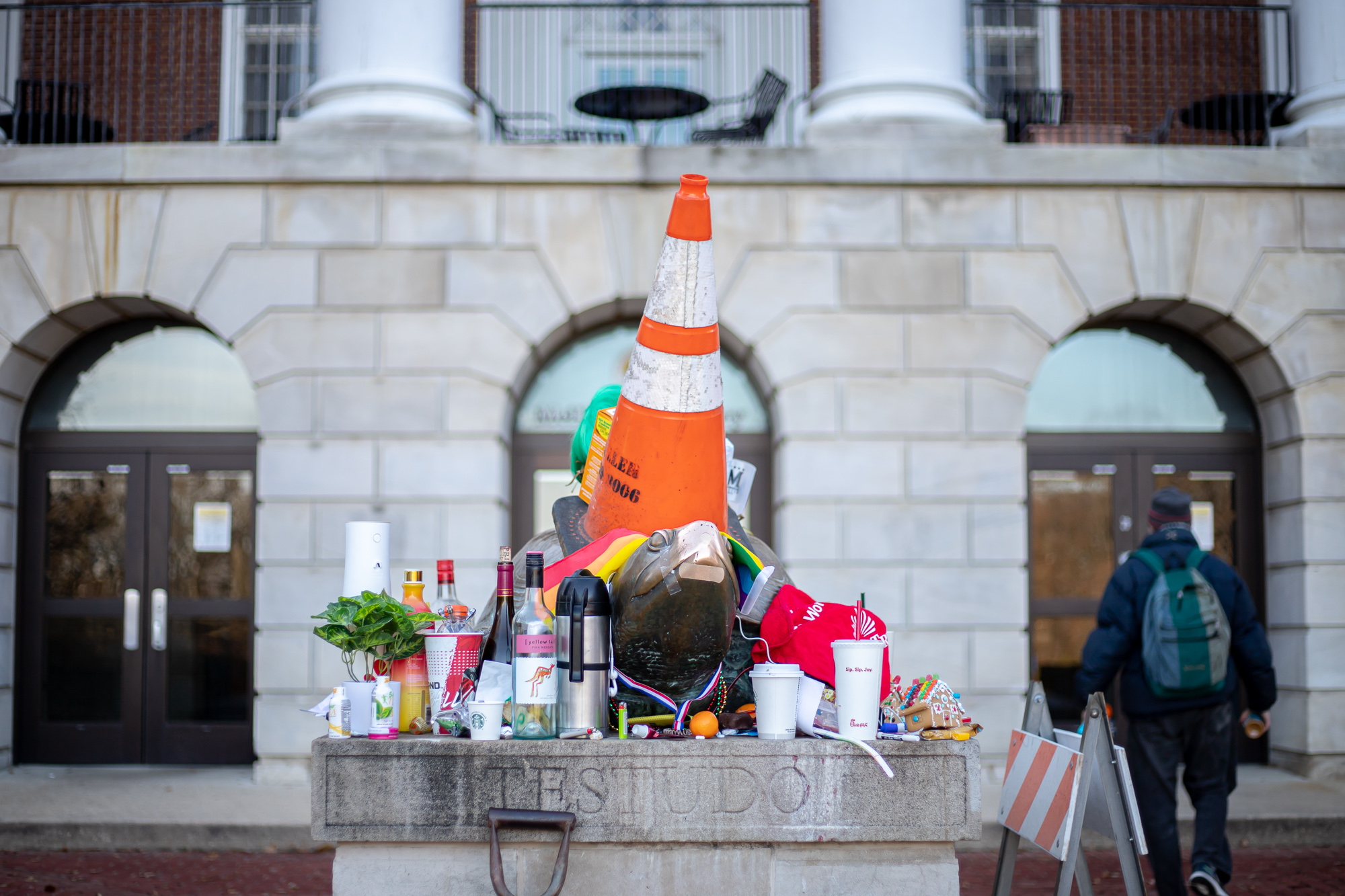 Testudo is surrounded by offerings during finals season of December 2019. (Suze Creedon/The Diamondback)

By Nick Nimkoff
For The Diamondback

For many students at the University of Maryland, a typical finals week involves participating in a campuswide tradition: giving a gift to the statue of Testudo and rubbing its nose to ensure good luck on exams.

From liquor bottles to golf carts, past offerings to Testudo have towered over the statue situated outside McKeldin Library. But this year, with classes online and most students no longer on campus due to the coronavirus pandemic, university community members have had to find creative ways to participate in the good luck ritual.

Ellie Litwack, a junior mechanical engineering major, created a program that allows students to drag and drop items onto an image of the statue and rub Testudo’s nose by pressing a button that activates an animated hand.

Litwack said she created the program on a whim.

People have already rubbed Testudo’s nose more than 23,000 times on Litwack’s simulator, but that isn’t the only way to pay respects to the mascot.

Jon Brodsky, a sophomore chemistry major, said that though he used the virtual simulator, he has also turned to non-digital ways to carry on the tradition.

Brodsky said he set up a makeshift statue of the mascot in his house, putting a small Testudo figurine on a shelf in his home to mimic the one on campus.

“It’s just one of the knickknacks I have,” Brodsky said, adding that he’s considering sacrificing extra items during finals season next semester to make up for lost time.

Erin Estes, an alumna of this university and a software engineer at J.P. Morgan Chase, came up with another way to keep the pre-finals ritual alive. Estes created a virtual island in Animal Crossing: New Horizons complete with a turtle statue to look like Testudo.

“It was really fun,” Estes said. She even advertised her Testudo online, setting up a “take-one-leave-one” exchange of offerings in an attempt to bring good luck to students this exam season.

Estes said she never gave an offering or rubbed Testudo’s nose for good luck during her time on campus. While she always used to go and look at what others had given the statue, she said she doesn’t fully believe in luck or karma.

But Adriana Alonzo, a sophomore animal science major at this university, said she thinks the tradition is an enjoyable part of campus culture. This past fall, she gave the statue Peppa Pig chocolate chip cookies before her chemistry exam, trying to score some good luck ahead of a test she didn’t feel prepared for, she said.

“I didn’t know anything,” Alonzo said. “But I mean I passed the class, so that’s a good sign.”

[Read more: TerpMatch might be returning for the end of the semester, after students ask for re-launch]