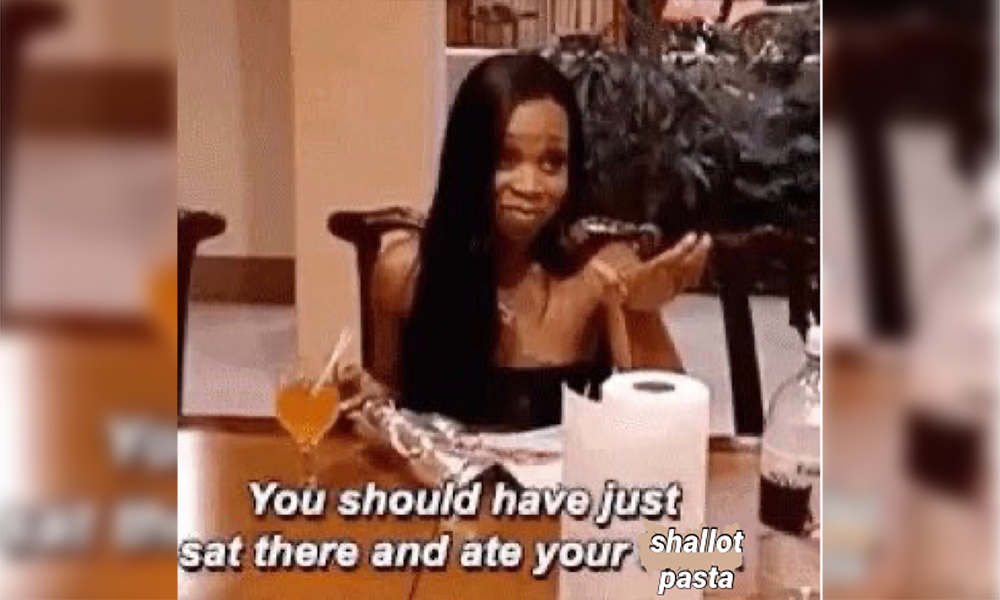 This Tiffany Pollard meme says it all that you need to know about Alison Roman. (Graphic by Manuela Lopez Restrepo/For The Diamondback)

The other night while eating dinner with my parents for what felt like the 800th day in a row, I came to a grave realization. While my father, an informed citizen of the world, was discussing foreign policy, I found myself contemplating Twitter’s latest, juiciest celebrity beef.

The stark contrast in what we were both thinking about was a reminder of how much I love to concern myself with shit that really, truly, does not matter. I think this is important to remember when hundreds of Americans are dying from the coronavirus pandemic every day, with thousands more projected to die. In that same vein, those of us stuck at home still following social distancing guidelines are desperate for entertainment, clawing at any opportunity to release a vicious, collective pent-up energy (and ire) toward someone.

The Alison Roman issue can be spun many different ways. In the now-infamous interview, Roman, a white woman, mocks Teigen and Kondo — both non-white celebrities — for “selling out” by deciding to sell goods in expansion of their brands. And you know what? I found Roman’s comments kind of reasonable; the food and lifestyle world has indeed become saturated with people sprinting to turn a profit after receiving widespread attention. This results in many icons calling on their fans to acquire more unnecessary material goods.

It’s important to note that, in the same interview, Roman also plugged her own kitchenware line so … pot, kettle, black!

However, in discussing a phenomenon that has been prolific since the days of Martha Stewart, Roman’s targeting of two women of Asian heritage feels not only bitter but a little bit … racist. What distinguishes Marie Kondo’s own implementation of a lifestyle goods brand from Gwenyth Paltrow’s scientifically inaccurate money grab also known as Goop? Why is Kondo a “bitch” and a “sellout,” but not Paltrow?

[Read more: We should keep TV as coronavirus-free as possible]

I don’t want to say I believe Alison Roman is a racist. But she sure had a lot of criticism for two distinctly non-white women in a field full of heavier hitters to choose from. In the original interview, Roman is quoted as mocking Kondo, a Japanese woman who (understandably) speaks English with an accent, accusing her of begging fans “please to buy my cutting board!” Roman then weakly clarified on Twitter that it was a reference to an “inside joke” with friends, and the article was updated with an editor’s note claiming she never used a “mocking accent.”

But Roman’s track record doesn’t help. She, like many other white American chefs, has an affinity for imparting a colonial touch on traditional recipes from other cultures. Rather than acknowledging the deep historical roots of dishes, she co-opts them for the masses as something more palatable and less “scary.” Why did Roman feel qualified to lead an incredibly expensive food tour through Vietnam despite never visiting the country before? I don’t know. Maybe she’s highly educated on Vietnamese culture or Asian cuisine. The fact that she lists rice as a “filler” in one of her recipe books leads me to believe otherwise.

But here’s the thing: I’m not going to spend more than a few seconds pitying a woman like Teigen, a highly successful model who is also married to one of the best-known musicians in the world. She has cultivated an empire around her passion for cooking and has a large, adoring fanbase. That’s not to say that I think any abuse — racial or otherwise — of Teigen is acceptable. But she is a very rich lady (a frequently out of touch one, I might add) and ultimately, I think she will be just fine as the obvious victor of public favor in this spat.

[Read more: Why is the internet so obsessed with Timothée Chalamet?]

But aside from the attacks on Teigen, I take more issue with the empty thought process behind Roman’s comments that ultimately made her come across as spiteful and dull. Her snarky follow-ups that didn’t acknowledge the racial aspect of this debacle allowed for the hole she dug herself to sink deeper. No, I am not here to defend Chrissy Teigen — but I also will not defend Roman’s mediocrity. This tweet is a succinct explanation of my thoughts:

My problem with a modern celebrity like Chrissy Teigen is that in addition to being absurdly rich she also wants to be perceived as a good person. These things are not compatible. You’ve gotta pick one or the other. Paris Hilton understood this.

Roman recently took to Twitter with the standard notes app-style apology where she acknowledged how her privilege and inherent desire to not be like Other Girls overruled her better judgement and made her look like, well, a fool.

Before this, Roman was a quarantine darling with recipes that many young people enjoyed for their simplicity and had ultimately garnered a serious cult following. In other words, she had secured the bag, and then she proceeded to fumble said bag before our very eyes. The art for this article is very intentional, and I dedicate it to all of the Alison Romans out there.

Next time, please, just sit there, and eat your damn food. If you have a hot take, think it through thoroughly before launching it out into the world and making a whole lot of people, yourself included, upset. Or better yet — try harder to not be a culture vulture. Now, Roman will not only face the wrath of Teigen’s army of fans, but those of shallot haters, and most formidably, the loyal admirers of Marie Kondo’s beautiful, giant baby.