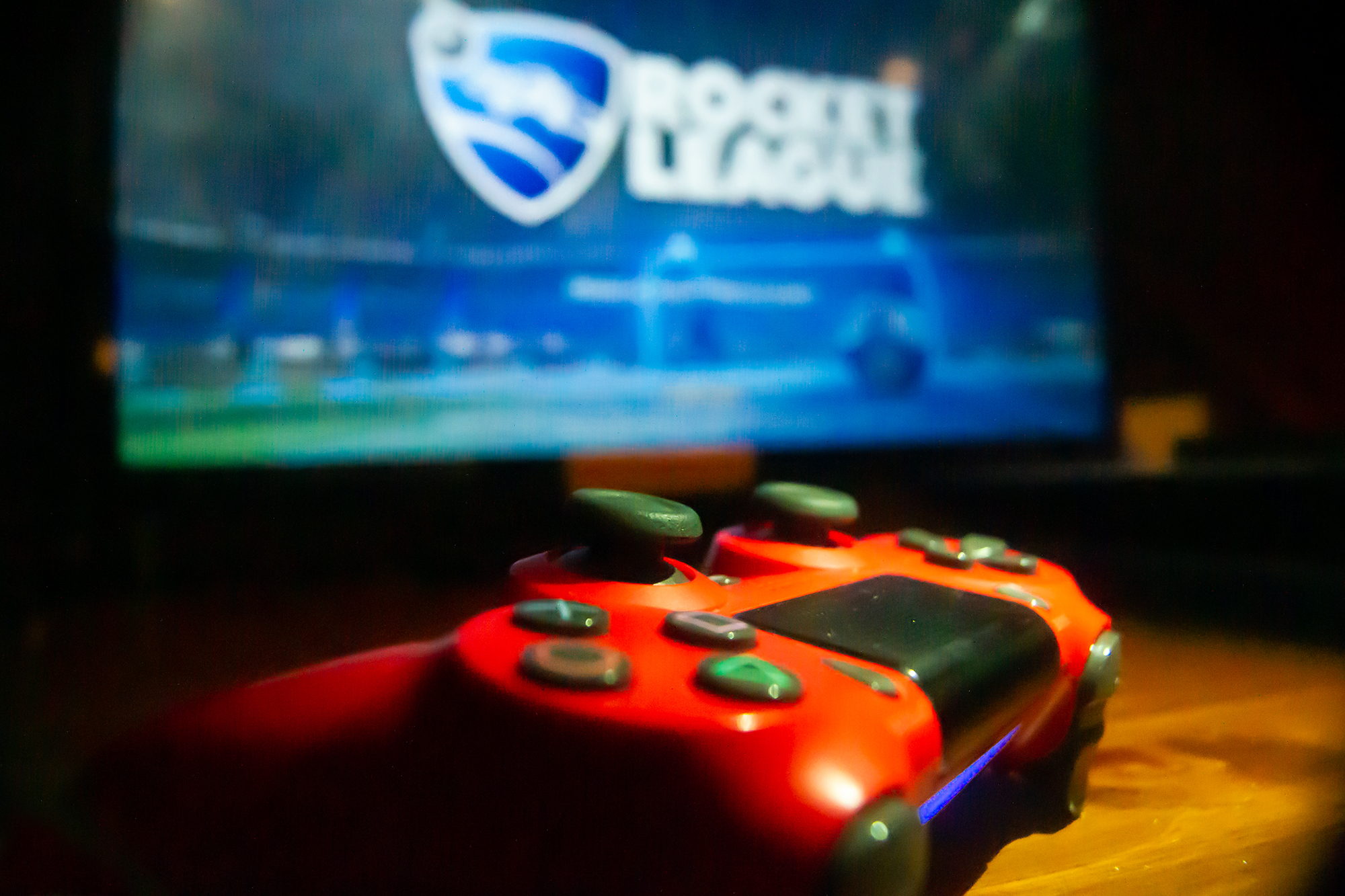 Rocket League, a video game where cars take the place of soccer players, is one of several video games offered by the University of Maryland as a replacement of the intramural sports program this semester. (David Suggs/For The Diamondback)

Junior Matt Lutz wasn’t supposed to be in Millington, Maryland, washing the dishes, setting the table or sweeping the floor back at home — at least not now, not in early May.

But that’s life for college students across the country. The coronavirus pandemic pushed universities to cancel in-person classes, leaving many students to return to their childhood enclaves. And with all the stress that comes with returning home prematurely, Lutz did what so many have done to decompress.

He turned on his gaming PC.

And as the aerospace engineering major played, he was transported to a world of wonder, a world where cars become soccer icons, complete with explosions, flips, collisions and speed boosts.

This is the world of Rocket League, one of several video games this university’s intramural sports program is offering this semester. With the constraints of a global pandemic making it impossible for the usual staples of soccer, basketball and volleyball to continue, the program has found a way to adjust. And though the transition to intramural esports hasn’t been easy, it’s been a success.

“It’s continuing the fun of IM in some way,” Lutz said. “It’s not the same, but it’s as close as you can get.”

It started easily enough — as cancellations piled up across the sports world, intramural program officials scrambled to find an alternative for regular intramurals. After careful deliberation, the directors found a simple solution: virtual sports.

“It seemed like a really logical next step,” said Jason Hess, intramural sports assistant director. “We wanted to really continue offering … opportunities for students to do something during this time, when everyone’s stuck at home.”

FIFA, NBA 2K and Madden leagues were offered, as well as virtual trivia, with each option generating varying degrees of interest.

But it was Rocket League that drew the most buzz. The button-mashing, the goals, the “gg” and “Nice Shot!” messages in the game chat all made for a compelling experience — one that convinced bored gamers to log in and strut their stuff against one another. And there was already a built-in fanbase at the university; the president of the University of Maryland’s Rocket League club even contacted intramural officials in an effort to get the game added, said coordinator Montrell Cade.

“After discovering … intramural esports were offered, it kinda got my competitive side back up again,” said junior information systems major Kirk Nisson.

As Rocket League interest grew, officials opted for a more participant-driven model, where players could pick who they wanted to play against and how many games they would play in the hour-and-a-half time slot.

It’s a clear departure from the set time and set opponent formula IMLeagues has relied on for in-person intramurals. But for Cade, the decision to go with a gamer-friendly approach was easy.

“With this time of being away and everything being virtual, we tried to be as flexible as possible,” Cade said. “We really just got to the point where we wanted to have essentially like an open gaming session.”

It wasn’t perfect — the open format of the competition made it difficult to consistently find competitive matchups, especially in the regular season. But it was something.

For 90 minutes, gamers had something to cut away from the pressure of quarantine and the uncertainty of the future — a vestige of a time before the pandemic, when intramural sports were an escape from the strain of school.

In those days, students would trek across the campus to the Reckord Armory and the Turf Fields — the pantheons of intramural sports — all for a chance to stand alone at the end of the season, draped in a T-shirt with “Intramural Champions” emblazoned on the front.

That experience, obviously, changed. Now, students walked across their houses to their gaming devices, their sweat-soaked pinnies replaced by pajamas and sweatpants. But come playoff time, one thing persisted: the drive to claim that ultimate prize.

But over and over, he saw his intramural dreams crash in the final game of a season, the chance to win a championship shirt just slipping out of his grasp. “Losing out on that shirt just really sucks,” he said.

This year was different.

Lutz competed in the 2-v-2 bracket alongside teammates Scott Sutherland and Thomas Pedersen. And, after crafting a pass-first game plan over the regular season, their squad — the Rocket Garage CEOs — quickly progressed to the finals to take on JMT8210.

The games were long, but the series was short, Lutz said. While several games went into overtime, the CEOs won four straight games to complete the sweep, giving Lutz his first taste of intramural glory.

It’s not quite the same. He’d rather be at the Turf Fields with his soccer team, adorned in that intramural champions T-shirt as floodlights dot the night sky, he said.

But, he’ll take it. It’s an experience that helped him readjust to life back at home and allowed him to reconnect with friends at a time when he’s not quite sure when he’ll be able to hang out with them again.

Most importantly, though, he got that shirt.