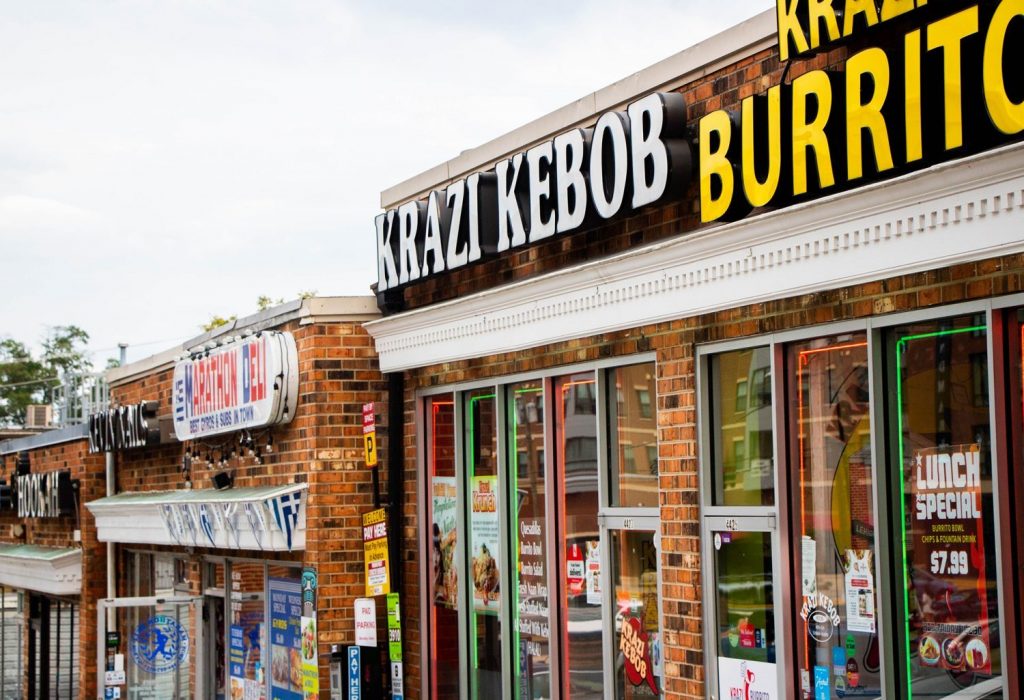 Krazi Kebob and Marathon Deli are among the businesses to be demolished to build a new apartment building. (Julia Nikhinson/The Diamondback)

The Prince George’s County Planning Board approved the detailed site plans for an apartment complex set to be built off of Route 1 in downtown College Park on Thursday — bringing the project one step closer to construction.

The development — which will replace several popular shops now located in the College Park shopping center, including Lotsa Pizza and Insomnia Cookies — is planned to include 343 multifamily units and offer more than 23,000 square feet of retail space, along with a fitness center, according to documents from the The Maryland-National Capital Park and Planning Commission.

“I think this project is really important as additional connective tissue between the campus and the city,” he said. “We’re really excited about this.”

Additionally, Ulman said, the Terrapin Development Company has offered to help relocate the businesses that will be demolished in the project’s completion — many of which have been in College Park for years. Marathon Deli, for instance, has already relocated to the storefront next to the space formerly occupied by MilkBoy ArtHouse.

Earlier this month, the city approved Greystar’s plans for the complex and made certain recommendations for the developers to consider. Greystar has since revised its detailed site plan to accommodate those suggestions, said Thomas Haller, the developer’s land-use attorney.

In conjunction with the city and university, Greystar will expand the width of Lehigh Road to 26 feet, Haller said. A sidewalk will also be constructed to provide students with direct access to Baltimore Avenue, he added.

And with the approval of the university, Greystar will replace the “substandard” staircase that runs between South Campus Commons and Montgomery Hall with a “grand” staircase, Haller said.

Ed Maginnis, the assistant vice president of real estate at the university, said during the meeting that the grand staircase will be symbolic in nature.

“That change is more than architectural,” Maginnis said. “It highlights what the university is trying to do with respect to the community.”

Greystar also accepted multiple recommendations from the county’s planning commissioners at Thursday’s meeting. Planning commissioner William Doerner, for example, suggested that the building’s rooftop — which will be covered in vegetation to improve stormwater management — be incorporated into the curriculum of relevant courses at the university.

Doerner also recommended that safety measures such as lights be added to the crosswalk across Knox Road that will connect the apartment complex to the College Park Shopping Center, where eateries such as Chipotle and Jason’s Deli are located.

In November, the county approved preliminary site plans for the project — the first step in the approval process for new developments in Prince George’s County.

Greystar already manages two different apartment buildings in College Park: The Alloy by Alta and, as of February, The Varsity.

However, some students, including senior government and politics major Stephen Kenny, have raised concerns that rent prices for the new units will be too high for college students. Kenny pointed to certain “unnecessary” amenities — like those provided by Alloy by Alta, an apartment building located on Berwyn House Road that includes a pet spa — as driving up rent prices in the area.

[Read more: A mixed-use development near the College Park Metro is slated to open in 2022]

“I think it’s unacceptable,” said Kenny. “I don’t think we should be unnecessarily discriminating against low-income students in terms of who gets to live near campus.”

But District 3 City Councilman John Rigg said creating affordable housing for college students can be tricky to accomplish. Students with low to moderate incomes could come from affluent families, so it’s tough to distinguish who is actually low-income and who isn’t, he added.

However, the introduction of new apartments will increase the supply of units in the area, which could lower rent prices, College Park Mayor Patrick Wojahn said. Still, he noted that the city will continue to work with the university to find solutions for student housing affordability,

Elizabeth M. Hewlett, chairperson of the Prince George’s County Planning Board, closed Thursday’s meeting in approval of the project.

“This looks like a … very beautiful project, which is enhancing the increasingly beautiful city of College Park,” Hewlett said. “It’s changed so much over the years, and not all change is good but in this particular city … the changes have been just beautiful.”