ImpactUMD party is one campaign violation away from SGA election disqualification 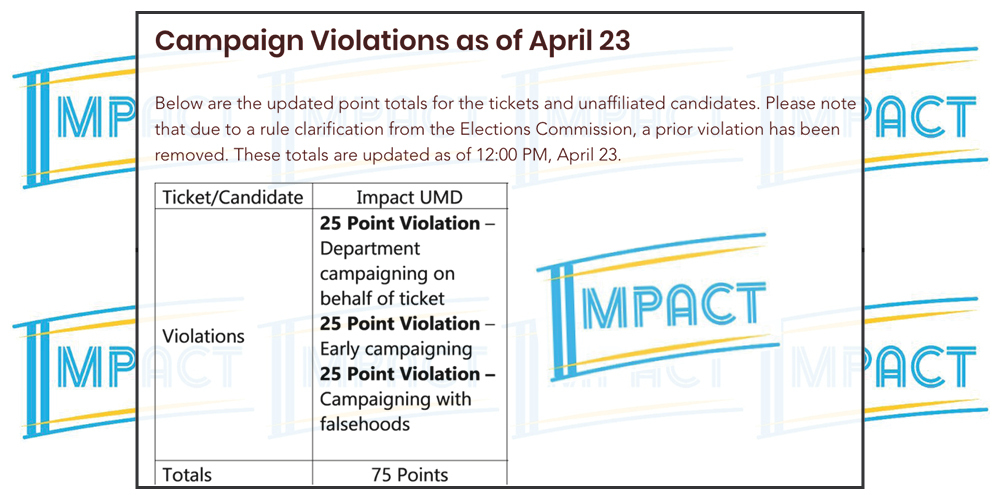 The University of Maryland SGA’s elections commission issued three campaign violations to ImpactUMD, one of the two parties running in this year’s election — putting the ticket one violation away from potential disqualification after the end of the second day of voting.

The violations include department campaigning on behalf of a ticket, early campaigning and campaigning with falsehoods. Each violation is worth 25 points, and according to election rules, accruing 100 points would result in disqualification. More serious violations can be worth 50 or 100 points.

ImpactUMD representatives did not respond to multiple requests for comment.

The first two violations were for campaigning prior to the April 15 start date and through departmental listservs on multiple occasions, said Dan Laffin, election head commissioner. The third violation — for campaigning with falsehoods — is still under appeal.

[Read more: The Diamondback’s coverage of the 2020 UMD SGA elections]

Though Laffin said he couldn’t comment on the basis of the most recent violation, he emphasized a clause that all campaigning efforts must be “undertaken in good faith.”

“We found that some of the efforts by a member of the ticket were not really grounded in facts, or, in some cases, seemed to be fabricated all together in such a way that it really couldn’t go without a violation,” Laffin said.

The appeals process for the third violation will hopefully conclude before election results are released Saturday, Laffin said.

If ImpactUMD receives another violation, an official disqualification wouldn’t be made until after all appeals processes ended, he said, and the commission made sure the violation pushed the ticket over the 100-point threshold. In such a case, the commission would ensure all necessary processes are resolved by Saturday evening.

The commission had previously given the other party, Forward Maryland, a 25-point violation for unaffiliated campaigning. However, the ticket successfully appealed the violation after the original rule was reevaluated and clarified.

“Forward Maryland believes in running a fair election,” ticket chair Elena LeVan wrote in a statement sent to The Diamondback before the committee reversed its decision. “We thank the Elections Commission for their hard work in working to maintain the integrity of this election.”