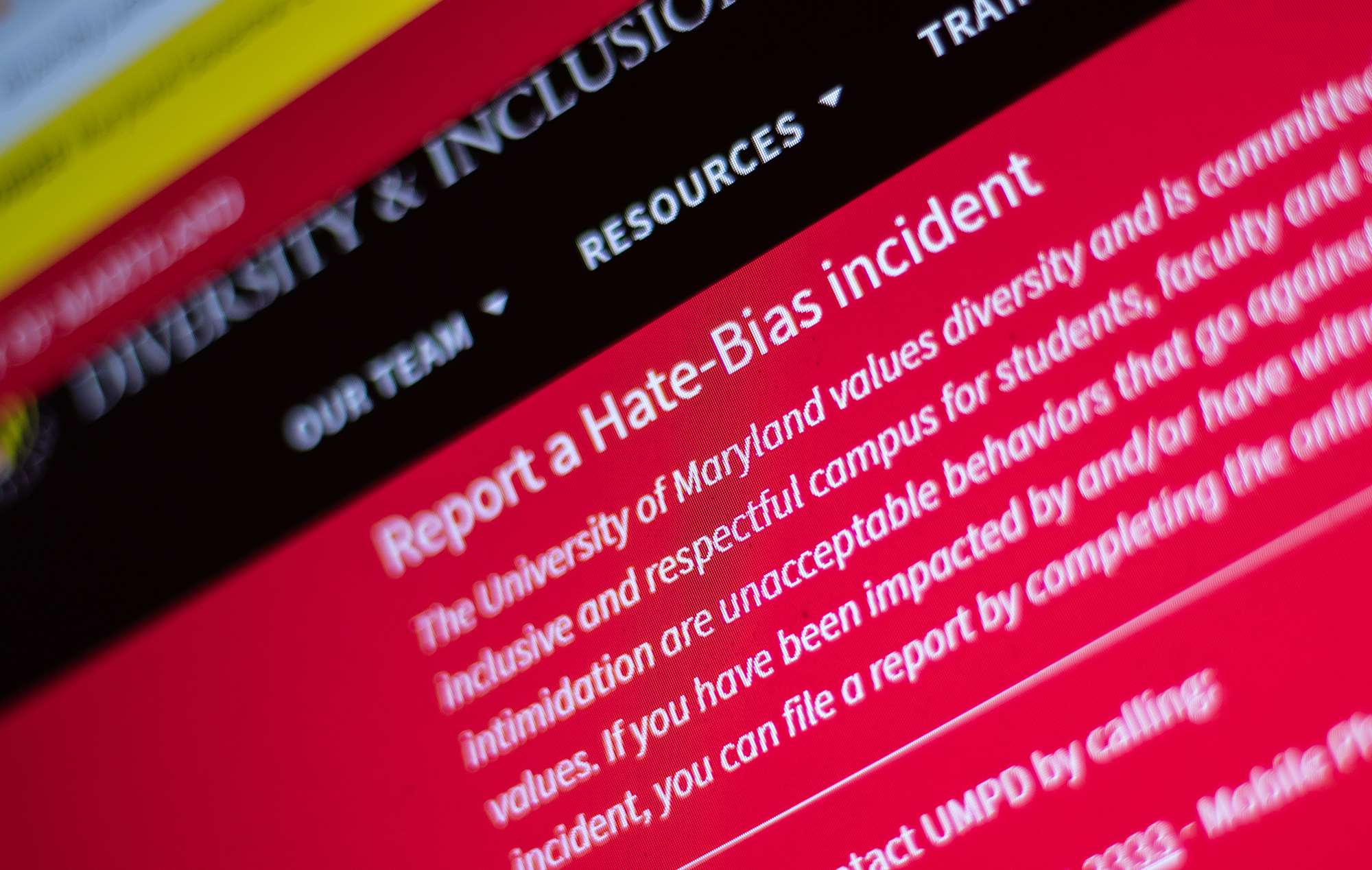 More than two years after the University of Maryland started a program to track hate and bias incidents, the university has released its first report on the findings. (Julia Nikhinson/The Diamondback)

After a series of racist incidents on campus in spring 2018, the University of Maryland started a program to track hate and bias incidents and provide support to victims.

More than two years after the program responded to its first incident, the university has released its first report on the program’s findings. But the report reveals little more than what has long been available online, and it exclusively covers the 2018-19 academic year.

Neijma Celestine-Donnor, program director for the university’s Bias Incident Support Services office, said turnover in the university’s Office of Diversity and Inclusion was partially to blame for the report’s timing.

Over the past three years, the office has had four different leaders or interim leaders. The last official to leave the position, Roger Worthington, had harsh words for the university’s administration on his way out, saying he hadn’t been given the proper support to do his job. Meanwhile, his replacement, Georgina Dodge, has drawn fierce criticism from students involved in the university’s Nyumburu Cultural Center — a campus hub for black student life.

For about two years, Celestine-Donnor was the university’s only staffer who dealt solely with hate bias incidents. Earlier this month, though, she was able to hire a program manager for her office. Celestine-Donnor is remotely training her new hire amid the COVID-19 crisis.

“We’re really excited about having this person on board,” she said. “We’re just trying to figure out, what does a virtual onboarding look like?”

The report describes how the hate bias response team handled the incidents — for example, by collaborating with other on-campus entities and holding town hall meetings. But it leaves out any mention of punishments handed down in hate bias cases. This information is similarly excluded from the online Bias Incident Report Log.

Officials said this is because data on sanctions is held by the Office of Student Conduct rather than the school’s hate bias program. But that office forms part of the university’s Hate-Bias Response Team, which also includes University Police and the Department of Resident Life, among other entities.

And Celestine-Donnor said the focus of her office is to provide support to victims of bias incidents. That’s why the report didn’t include information on punishments, even though similar campus reports on sexual misconduct typically do so.

“The purpose of Bias Incident Support Services is really to make sure that we are dealing with the impacts and providing support,” she said.

Still, Elonna Jones, president of the university’s NAACP chapter, said she’d appreciate information on the number of individuals who have been punished for committing acts of hate or bias — especially considering the tragedies that have occurred on campus during the last four years.

In May 2017, 2nd Lt. Richard Collins, a black Bowie State University student visiting the campus, was stabbed to death by Maryland student Sean Urbanski. Urbanski was convicted of first-degree murder in December, although the hate crime charge against him was dropped.

“It’s like, we get a UMD Alert that something happened,” said Jones, a senior government and politics major. “Where is the follow-up after that? What happened to the person? What are going to be their consequences? And I think, knowing that there were consequences is what gives the idea of security to black students.”