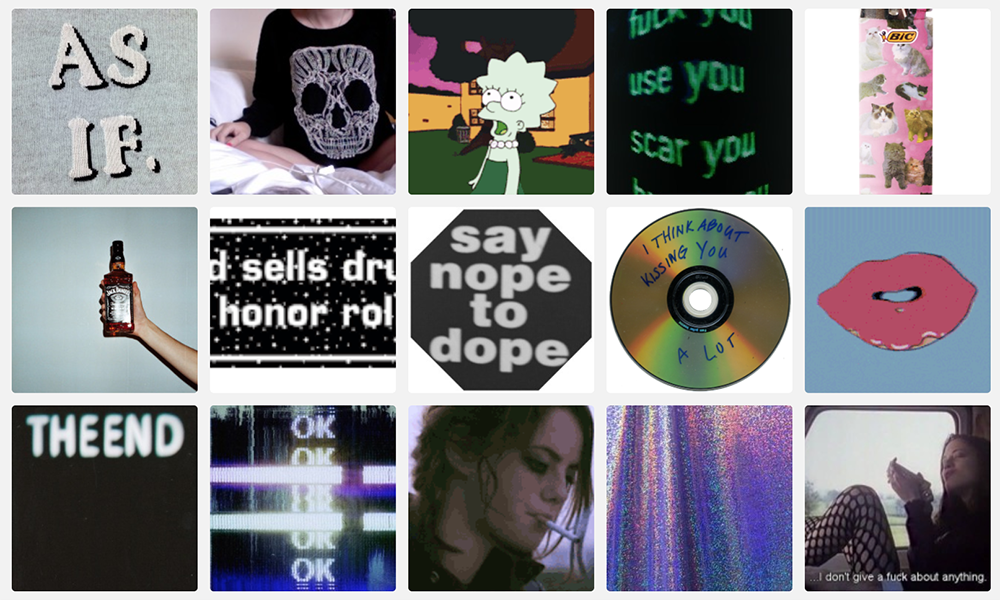 Tumblr was my haven in high school. It was a great way to express yourself through a time of hormonal turmoil and major insecurities — you could post videos, music, text posts or photos to your blog. For me, I usually reblogged the photos I found aesthetically pleasing.

But what made something aesthetically pleasing? For my first few years on the website, I just shared things I found funny or cool, with no regard to theme. But as I became a seasoned Tumblr user, I started to notice the value of having a cohesive feed. Now that is aesthetically pleasing. It’s the same logic people on Instagram use when they put the same filter on all of their photos.

I haven’t been on Tumblr since I forgot my password (and the email needed to retrieve it), but in a recent scrolling session on TikTok, I found a slideshow of images that jolted me back to the height of my blogging days. In the montage — set to “505” by the Arctic Monkeys, of course — influencer Orion Carloto let viewers know that all of these images came from her Tumblr in 2014.

@babysp1ce666if u recognize any of these photos, congratulations…. u probably followed me on tumblr in 2014. sskeptical, baby, that’s me!♬ 505 – Arctic Monkeys

Whoever said grunge was dead after the demise of the early ‘90s rock genre was sorely mistaken. In the early 2010s, it was alive on Tumblr — just a little softer and with more pictures of cigarettes and overcast weather.

[Read more: If ‘Some Good News’ is what you need, John Krasinski provides it]

I didn’t start out as a soft grunge blogger. First I had a “tropical” theme, which was basically variations of the phrase “good vibes,” pictures of cut-up exotic fruits and girls in bikinis with mermaid-like hair. Then, there was the “rosy blog,” which featured anything pink or luxurious — think smoothies, designer watches, flowers. It’s hard to tell exactly where my tropical theme ended and my rosy aesthetic began.

Then came my soft grunge days. Maybe it coincided with the time I finally got sick of wearing chestnut Ugg boots and yoga pants to school. My Tumblr archives for the later months of 2013 suddenly saw an influx in angsty quotes from TV shows like Freaks and Geeks and Skins. Almost every photo looked like it had been run through VSCO with the pale, faded T1 filter.

For a couple of years, I’ve seen the occasional reference to soft grunge Tumblr. In just nine photos paired with an Arctic Monkeys song, I was fully transported back.

As I rifled through my Tumblr’s archives, I started to understand why this was such an influential time in my life. This theme was about more than just the aesthetic. Through it, I discovered music, television and movies. Although I may have had a superiority complex when first listening to Arctic Monkeys, I’m glad I discovered the band’s work.

Going through a drastic makeover as a teenager can be hard when you’re normally supervised by a parent. I couldn’t justify a new wardrobe or lifestyle, but I could certainly express it through my Tumblr page. It served as a form of virtual dress-up.

A lot of soft grunge can be categorized as “edgy” — which makes the many screenshots from the provocative British show, Skins, on my page make sense. In my archives, I found: a photo of a wide-eyed Cassie from Skins looking at a recreational pill, a GIF of the caterpillar from Alice in Wonderland smoking a hookah and a photo of someone holding up a handle of Jack Daniel’s whiskey. The soft grunge theme, at least for me, was pretty performative. At that point, I had zero experience with drugs or alcohol.

When school stress or insecurity got to me, I could relieve it through ~*totally aesthetic*~ photos with profanity and girls in fishnet tights. I’d like to think it’s influenced some of my style today, so I just view it as a portion of my life when I started to find myself. Now whenever an Arctic Monkeys song comes on shuffle, or I find the perfect oil slick for a photo of my Doc Martens, I’m taken back to my days of virtual dress-up.