If ‘Some Good News’ is what you need, John Krasinski provides it 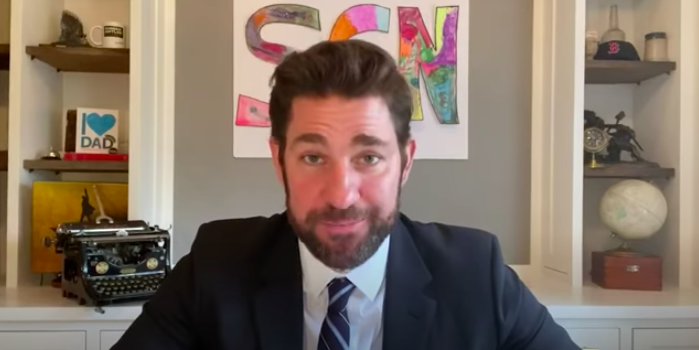 We currently live in a world of bad news. Turn on the TV: bad news. Open a newspaper: bad news. Radio: bad news. Twitter: bad news. If you’re like me, you find yourself asking hypothetically — or even out loud — “Can I have some good news for once?”

In the form of a new YouTube show, John Krasinski obliges.

Krasinski’s aptly named Some Good News — SGN for short — brings viewers a needed dose of positivity and hope, a concept born out of the actor’s longtime desire to watch a show dedicated entirely to positive stories. It’s a news aggregator for stuff that will make you smile during what seem like smile-less days.

The good news shared can vary from neighborly good deeds and creative ways parents are entertaining their children, to providing trick-or-treat style hand sanitizer and toilet paper giveaways to delivery workers. There is also, as there should be, lots of appreciation for health care workers.

Like a proper talk show should, the episodes usually feature an interview (over Zoom). To celebrate the 15th anniversary of The Office, Krasinski brought on Steve Carell, his former fictional boss Michael Scott, to discuss their time on the sitcom, giving some behind-the-scenes insight into the laughter the show brought them.

[Read more: The best short films to enjoy from Omeleto]

Later that episode, a 15-year-old girl from California named Coco joined the show. She had recently finished chemotherapy and was greeted on her return home by a socially-distanced celebration of family and friends.

“Holy moly,” Krasinski said to the camera after she left. “If that girl isn’t the epitome of pure goodness, I don’t know what is.”

In episode two, a girl named Aubrey — whose trip to see Hamilton was canceled — was the featured guest. After she told Krasinski she had “never really seen The Office or whatever,” his wife, Emily Blunt, made a quick appearance to the excitement of the young Mary Poppins fan. Then, suddenly, Lin-Manuel Miranda and the original cast of Hamilton joined the call to deliver a rendition of the show’s opening number, leaving Aubrey speechless.

In episode three, Krasinski organized a trip for nurses and doctors from his hometown of Boston to take a trip to Fenway Park and run the bases. Krasinski video chatted with the health care professionals — whom he refers to as his heroes — along the way.

Unlike other shows with hosts who have been forced awkwardly into their living rooms for their nightly monologues, Krasinski’s show was born in this casual environment and makes no effort to appear to have a high production value. Sitting in what looks like his home office, in front of a colorful and asymmetrical SGN sign that his daughters made, Krasinski seems like he’s just trying to have fun and is bringing his viewers along for the ride.

Krasinski’s not-taking-himself-too-seriously personality is perfect for the show and, even though he wears a suit, it feels very relaxed. For the TV and movie star, the move from big screen to YouTube seems to have brought him a huge sense of fulfillment. For viewers, it was necessary.

CORRECTION: Due to an editing error, a previous version of this story’s headline misspelled John Krasinski’s surname. The headline has been updated.