“Our central duty”: College Park service groups run errands for those in need 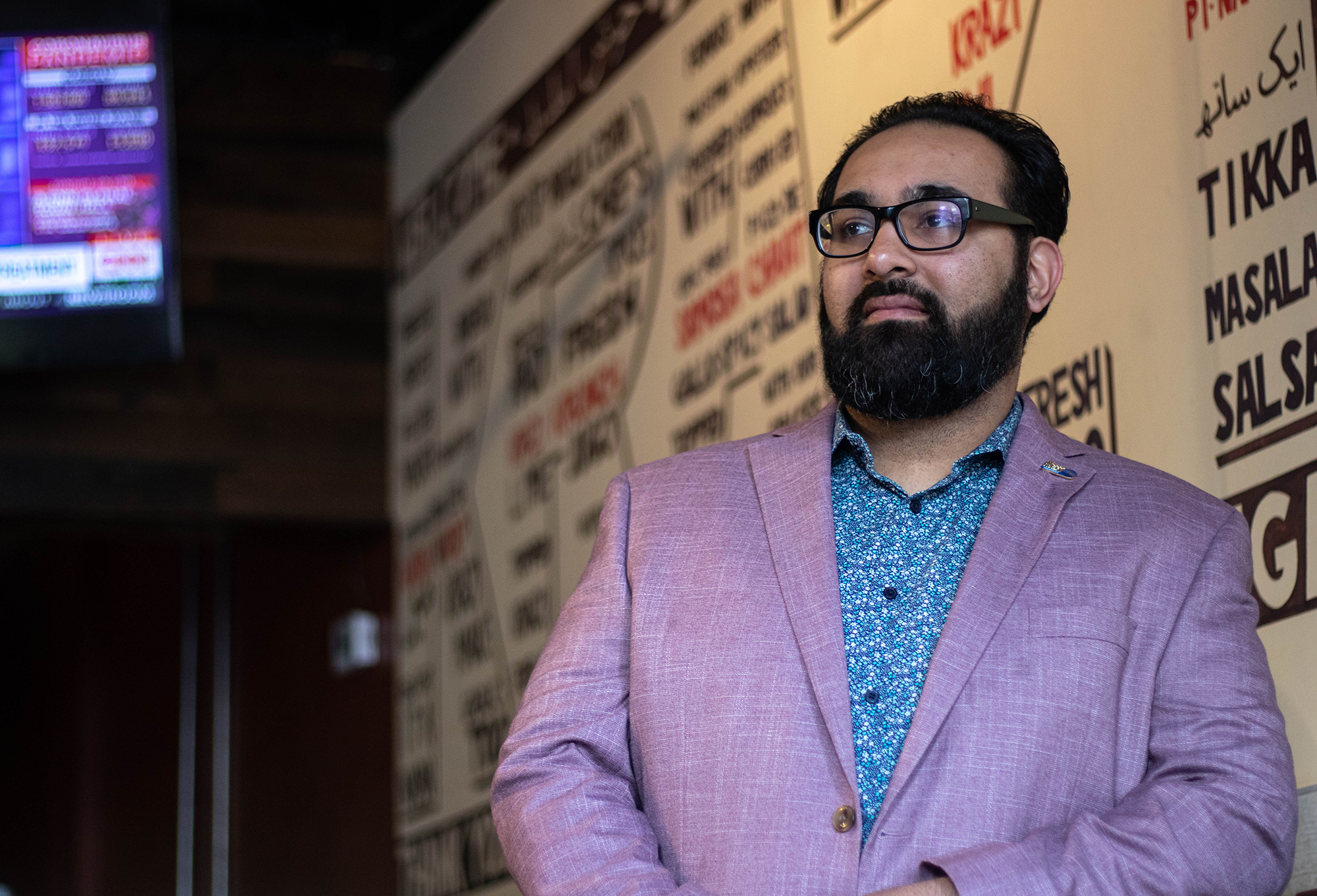 Nomie Hamid, the president of the Rotary Club of College Park and the owner of Krazi Kebab, set up a hotline so that members of the community could call in for aid with groceries or other tasks during the coronavirus pandemic. (Julia Nikhinson/The Diamondback)

For years, Lisa Ealley and her team of volunteers at Meals on Wheels talked about how many senior citizens the group could serve before they would need to start a waitlist for eligible clients.

But since conditions caused by the coronavirus pandemic have worsened nationwide — keeping many Americans shuttered in their homes and in need of food deliveries — the local nonprofit group has tossed out that idea altogether. The volunteers decided they couldn’t leave anyone behind, according to a letter Ealley wrote to the College Park City Council.

With many residents now hesitant to leave their homes, organizations in College Park — both new and more established — have stepped up to the plate. Though some have begun serving food to older residents and others have offered assistance in completing daily tasks, they share the same goal: making sure people stay safe.

“It’s a necessary thing that needs to be done, and somebody’s gotta do it,” said Ealley, chairperson for Meals on Wheels of College Park.

For $5 every day, the program delivers three meals — breakfast, lunch and dinner, along with some snacks — to senior citizens in College Park and other areas in northern Prince George’s County. And since elderly people are at higher risk for severe illness from COVID-19, demand for these meals has doubled since the outbreak, amounting to about 150 clients, Ealley said.

Volunteers now have to wear gloves and masks while making deliveries, Ealley said. And inside the kitchen, surfaces are sanitized twice a day, she added.

Jim Hartsock, 84, said he’s thankful for the College Park organization’s efforts. Meals on Wheels has been a great help to him and his son over the past seven years, he said.

“It’s a good program, it really is,” said Hartsock. “They’ve been in business … a long time, and they’ve got a good reputation here.”

Nomie Hamid, president of the Rotary Club of College Park, a humanitarian service organization, knew in early March that the pandemic would soon reach his community in Maryland. Preparations needed to be made to accommodate the increased demand for help, he decided.

With the help of College Park members, members of the greater Rotary Club district for central Maryland and Washington, D.C., and non-Rotary volunteers, Hamid set up a hotline that members of the community can call to ask for help picking up groceries or completing other tasks. Over 300 volunteers help answer the calls, complete jobs for those who dial in and spread the word about the hotline.

All volunteers for the hotline wear masks and gloves and leave groceries at the caller’s doorstep. The club is also preparing a training video for volunteers who are making deliveries.

“Every man needs to give back — at the minimum — what they were given in this world,” Hamid said. “It’s our central duty as human beings to make sure we help the people around us and to help make a difference.”

Over the three weeks the hotline had been up and running, the response has largely been positive, Hamid said.

“‘Thank you so much,’” Hamid recalled those over the phone saying. “‘Because we didn’t know where to go. We didn’t know who to contact. We’re scared to even exit the house, to go to the grocery store.’”

Ashfaq Khan, director for communications for the hotline, recalled one woman in Capitol Heights panicking over the phone about going out to purchase groceries.

“I remember us calming her down, letting her know, ‘Don’t worry, we’ll take care of this,’” Khan said. “I don’t want her to worry in any way, shape or form.”

However, the pandemic has brought forth new problems for some service groups.

For Meals on Wheels, limits on the number of items that can be purchased at grocery stores has made buying large quantities of things such as butter or juice difficult, Ealley said. Her husband goes to the grocery store nearly every day to pick up items they need.

[Read more: UMD has run out of hotspots, laptops to provide students]

“We’ve been trying whatever we can to make things work as best they can,” Ealley said. “We’re being creative.”

But Ealley expressed concerns about the health risks involved with such frequent trips to grocery stores. Her family and volunteers could be exposing themselves to the virus every time they go, she said.

“I hope to God nobody gets sick,” Ealley said.

There’s also been a need for more funding, Ealley said, to keep up with the increased demand. Less than a quarter of the nonprofit’s budget comes from the county, so the program has to rely on donations and grants, she said.

To help, the council passed a motion April 7 for the city to give $12,000 in funding to Meals on Wheels. The city will also provide the organization with a letter to show wholesalers, indicating that they wouldn’t be limited on the number of items they can purchase.

“They can’t sustain it without additional support,” Mayor Patrick Wojahn said at the council meeting. “Their demand is probably going to increase even further with this crisis.”

RJ Bentley’s also contributed to Meals on Wheels by donating 125 sandwiches each day — something Ealley described as a “godsend.” But with the virus prompting RJ Bentley’s to alter their service, Ealley said the restaurant is now only able to provide 50 sandwiches, three days a week.

A new group formed by College Park residents has also seen obstacles. In March, Tom Kovarik and several others in his neighborhood started College Park Neighbors, a group that intends to help people — especially seniors and people who are sick — with daily tasks.

The group passed out over 200 flyers around the neighborhood to gauge local interest, but it had not yet received requests for assistance — something Kovarik attributed to a preference for more established groups. Still, he said the group is still willing and able to help those in need.

“The concept was you wouldn’t need to justify it. You just need to ask, and as long as we had the volunteer bandwidth for it, we would be happy to do it,” Kovarik said. “I wanted to make sure that they had us as an option.”

And though there had not been anyone to help yet, resident Constantia Rioux considered the opportunity to help people a “win-win.”

“Helping others is a good way to get your mind off your own problems,” she said.