With a world in tumult, my foster dog has given me reason to smile 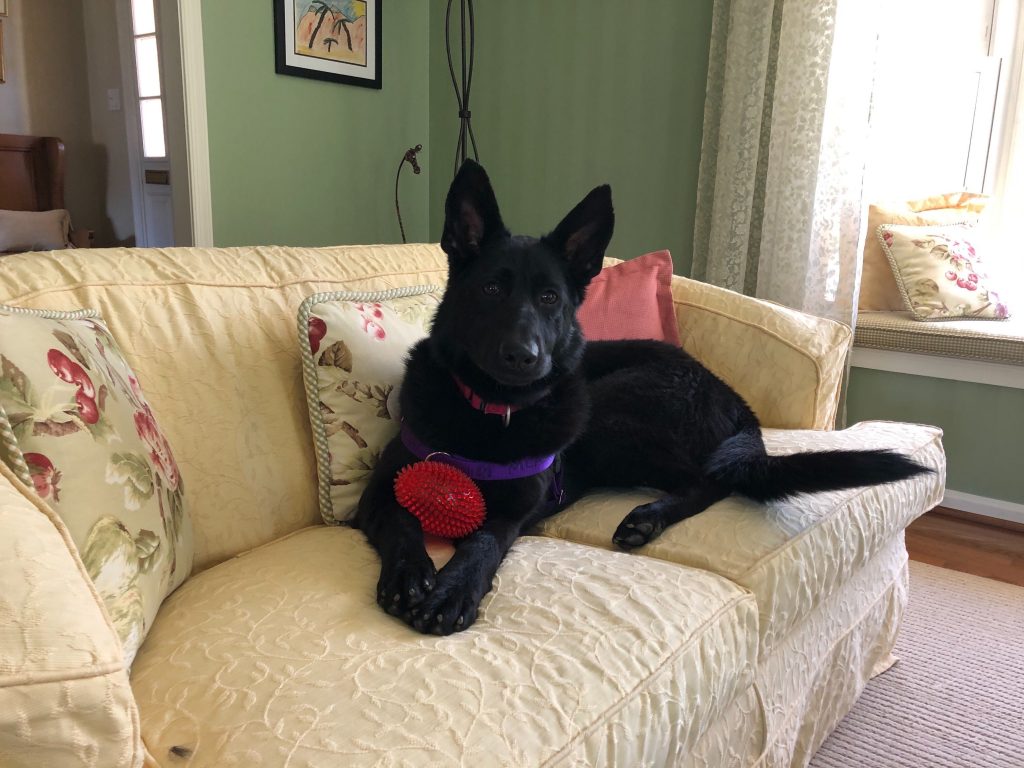 The young German Shepherd mix, Parks, lays on a couch with a toy. (Photo courtesy of Andy Kostka)

It was this idealistic vision of what a dog could be: a perfect creature who knew when to jump and when to sit and when to play and when to sleep. And every picture on Petfinder seemed to magically fit the bill.

If you couldn’t tell, I’ve never owned a dog. I’ve dog-sat many times throughout my life, but my dad’s allergies and my mom’s neurotic need for tidiness never lent themselves to having a pup in the house for longer than a neighbor’s vacation.

So when Parks  — a one-year-old German Shepherd mix I’m fostering — first came home from the shelter, so did a realization of what it’s actually like to own a dog, even if it’s on a temporary basis. There were the accidents in the house and hyperactive energy as she got used to a new place. There was fear and barking and growling and whining when other dogs got too close, perhaps a result of whatever gave her the small scar that’s on the bridge of her nose. There was even a broken vase, a result of too much curiosity.

But as time passes, and Parks learns to squat in the grass rather than on the carpet, all the best attributes come pouring out and plant themselves in my mind. She plays fetch. She rolls onto her back and wants belly rubs — lots of them. She lets me sleep until the sun almost rises and sometimes settles down to lay her head on my lap. She likes to walk, tries to chase squirrels and deer and really hopes one of these days I drop food off my plate.

[Read more: The importance of doodling every day]

In short, Parks has turned from a project — retraining a dog that was a stray just last month — into a joy, one that comes in a 50-pound package prone to shedding its fine black fur. With black clouds converging on the world every day during the coronavirus pandemic, she’s the bit of sunshine that breaks through — even when her wet nose wakes me up before the crack of dawn.

It all started with a semi-blind guess, selecting Parks from a pack of five dogs who needed fostering from the Montgomery County Animal Services and Adoption Center, mostly decided because of her pointy ears and long snout. I hardly knew anything about her beyond an explanation from shelter staff that she liked people but couldn’t tolerate other dogs. I learned her name came from the street she was found wandering around about a month earlier.

I don’t know her backstory, though. I don’t know why she was homeless or why she’s frightened of other dogs.

I’ve tried to fill in the missing details, taking stabs in the dark as I learn her tendencies. But that exercise is as frivolous as telling Parks she’ll never catch a robin — they have wings; she doesn’t.

Still, I continue to make guesses to sort of understand the absurdity of it all, how a dog this sweet wound up on the street and then inside my home.

Perhaps it was her fear of other dogs, something I learned all too well on one of her first walks. A neighbor dog, off leash, decided to run up and sniff the new pup in town. Parks’ barks turned into a high-pitch squeal, and I scooped her up off the ground and carried her home. She laid limp in my arms.

Or maybe her original family suddenly fell into a difficult financial situation, and the dog’s expenses were too much. Or she got separated from her family, and they just haven’t found her yet.

No theory ever really makes complete sense, though. So I give up and pet Parks behind those pointy ears, laughing at the silly things she does.

One time, as I sat on the couch drinking a Yuengling, she used her paw in an attempt to bat the bottle out of my hand (I can only guess she wanted me to up my taste in beer). When I laid in bed reading Lord of the Rings, she pawed at the paperback, knocking it from my grasp (Not a Tolkien fan, then?).

I don’t know how long Parks will be mine. I don’t know if she’ll find a forever home elsewhere or wind up becoming such a big part of my life that I keep her — a daunting idea, considering the hours I’ll work if a career in sports journalism pans out.

But what I do know is that she’s in my present. And while I may fade into her past and evaporate from her memory, Parks won’t ever leave me, even if we have to say goodbye.

She’s worked her way into my heart and mind. She’s there to stay. She’s the bundle of fur who’s helping me get through a world in tumult, the rambunctious girl who taught me there’s nothing you can be sure about with a dog.

Except love — and she’s full of it.