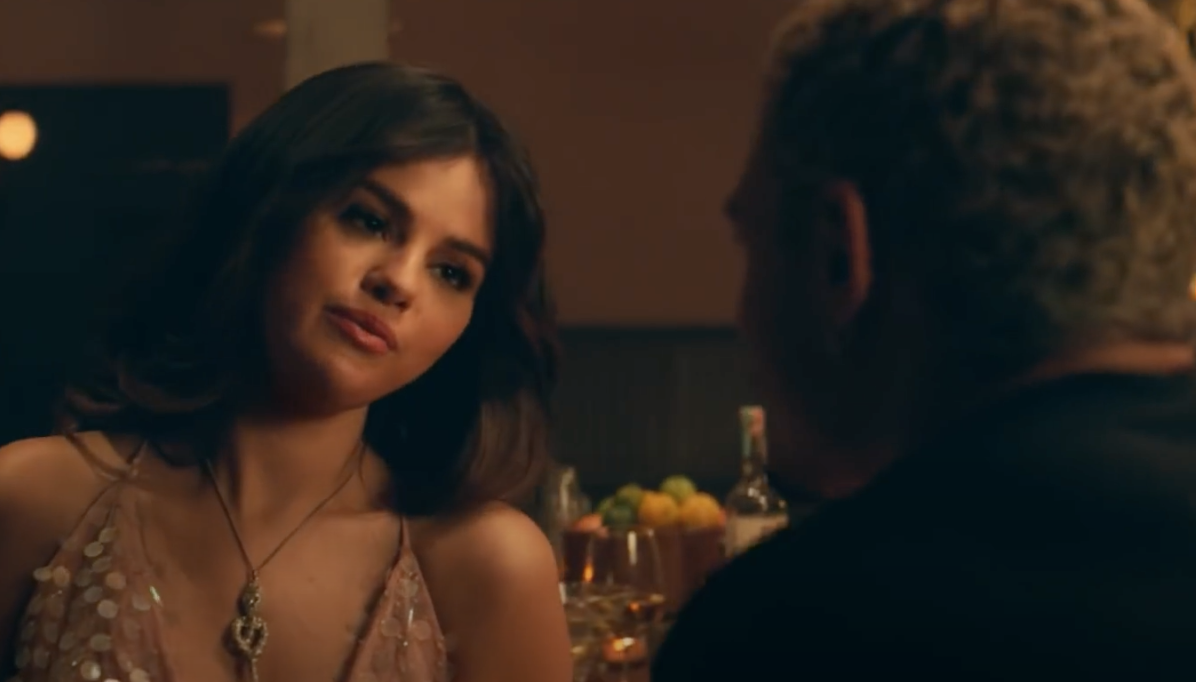 Selena Gomez in her new music video for her single, 'Boyfriend' (Photo via YouTube).

In the beginning shot of her “Boyfriend” music video, Selena Gomez rocks an effortlessly chic red dress paired with matching colored heels, a loosely wrapped headscarf and a pair of large black sunnies. The whole outfit calls to mind a vintage rendition of a glamorous and high-profile  “just killed my husband and now I’m off with his riches” fit.

Although the premise of the music video isn’t about killing a lover and inheriting an immense amount of wealth afterwards, Selena manages to exude major femme fatale vibes while driving into the night sky with a cage full of frogs in the backseat of her old school ride.

The music video for Gomez’s latest banger, “Boyfriend,” is an artful blend between Disney influences, retro themes and witchy vibes. Gomez plays the role of a sorceress-like character who possesses a magical potion that transforms men into ghastly-looking frogs. After going on a series of failed dates, Gomez uses her potion to turn all her dates into the frogs she holds captive in her cage.

In addition to the breathtaking visual aesthetics and the stellar wardrobe, the music video also conveys a larger message. Gomez’s song is aptly titled “Boyfriend,” yet her primary message isn’t about needing a boyfriend. It’s about wanting one.

In the pre-chorus, Gomez sings “There’s a difference between a want and a need/ Some nights, I just want more than me.” And in the music video, Gomez isn’t ready to settle on just any man that walks across her path. She’ll have to kiss a bunch of bad frogs until she finds her true match.

But the ballad also speaks volumes about Gomez’s previous romantic history. After garnering plenty of media attention following her breakups with Justin Bieber and The Weeknd, Gomez was once again put under the spotlight after Bieber’s engagement and The Weeknd’s return to an old flame.

And so, “Boyfriend” serves as both a confidence booster and a big middle finger to those that doubted Gomez and diminished her worth. She proudly sings about how she will always be content with just herself, no matter what.

After taking a five-year break from music, Selena Gomez returned to the music scene stronger and bolder with the releases of her album Rare and its deluxe version. “Boyfriend” is featured in the deluxe version, along with three additional tracks.

It’s hard not to feel nostalgic while listening to “Boyfriend” and other bops off of the regular and deluxe versions of the album. Listening to her latest songs made me more appreciative of her growth as I remembered her Disney Channel days of budding stardom. “Naturally” and “Tell Me Something I Don’t Know” are still timeless bangers from her iconic 2009 album Kiss & Tell, but her albums that come afterwards show her true artistry and talent as a singer.

Perhaps, unlike her previous albums, Rare is more personal and intimate as it explores themes of self-love and confidence. It’s an album Gomez produced after years of living  with anxiety, depression and a chronic illness, as well as constant media speculation and backlash. So, it’s quite liberating to see Gomez embrace her past and sing about how those critical moments have shaped her into the person she is today.