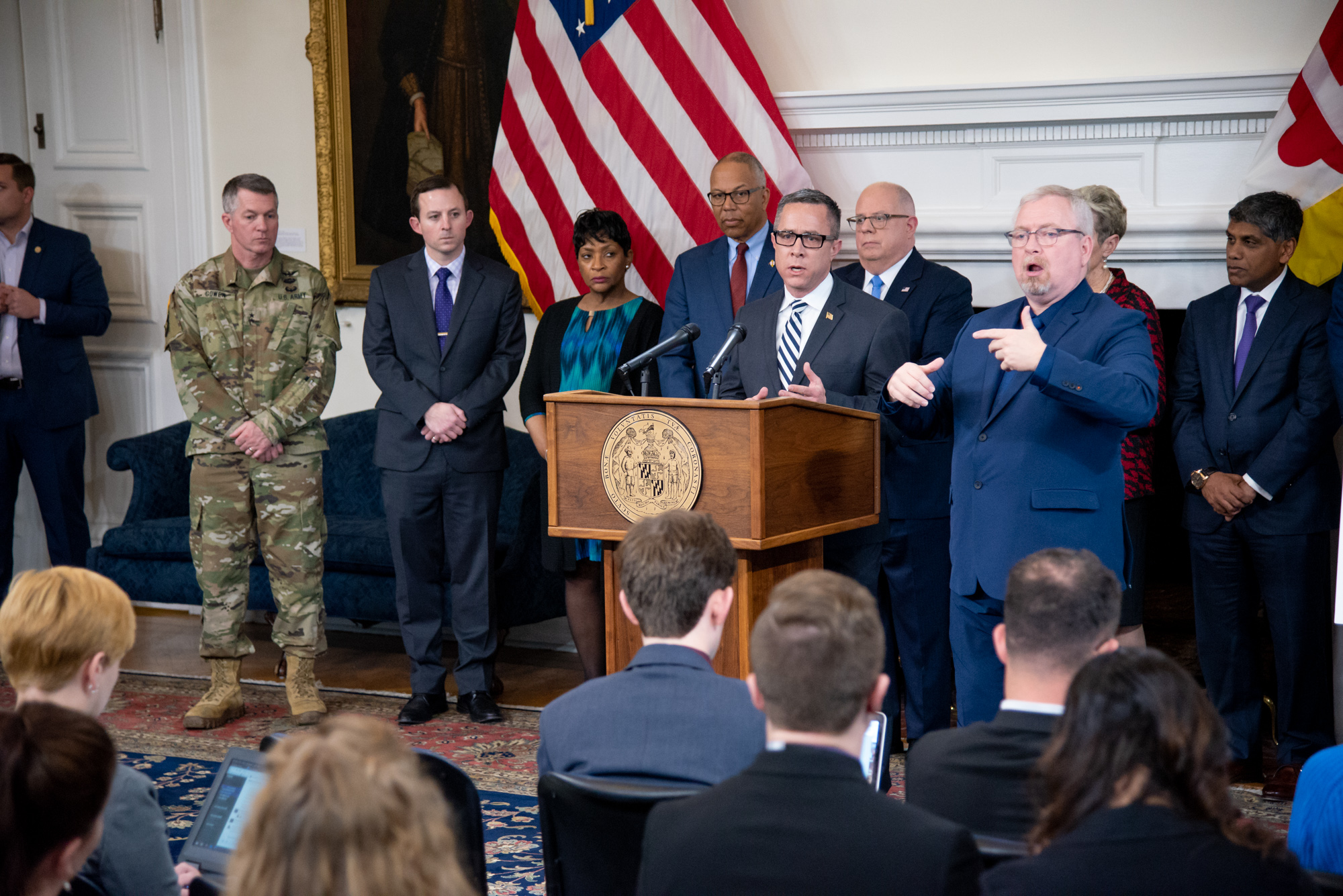 Dr. David Marcozzi, a physician affiliated with the University of Maryland Medical Center, speaks at a coronavirus press conference in Annapolis on March 12, 2020. (Matt McDonald/For The Diamondback)

The White House has designated Prince George’s County a COVID-19 “hot spot,” along with the rest of the Baltimore-Washington corridor, Maryland Gov. Larry Hogan announced at a press conference Tuesday.

The designation applies to the entire state, Hogan said. And it names specifically Prince George’s — along with 10 other counties and the city of Baltimore — as needing “urgent federal attention,” he added.

Hogan said the specification came after weeks of “sounding the alarm” during talks with the Trump administration amid the worsening state outbreak.

“This virus continues to spread in every jurisdiction in our state,” Hogan said.

As of Tuesday morning, there were 4,371 confirmed COVID-19  cases and 103 deaths in Maryland, according to data from the state’s health department. Prince George’s County has the most reported cases and most deaths out of all counties, at 1,020 and 26, respectively, according to the data.

The federal recognition of the severity of the area’s outbreak comes as the state prepares for worse to come.

Hogan hosted the press conference at the Baltimore Convention Center following a tour of the building  – now a converted field hospital that can accommodate hundreds of patients.

It is part of an effort in the state to increase state medical facility capacity “when and if” there is a large influx of patients, said Dr. David Marcozzi, an associate professor at the University of Maryland School of Medicine and a member of the governor’s coronavirus response team.

Along with projects to increase state medical facility capacity, Hogan has overseen efforts to ease access to coronavirus tests. Multiple drive-through locations have opened this week, including one that’s about 6.5 miles from College Park, in White Oak.

But doctors on the governor’s response team said social distancing remained the best tool to slow the spread of the virus. Hogan joined in, announcing he’d issued an executive order ramping up crackdowns on violations of the distancing policy set by a prior order.

[Read more: President Loh on COVID-19: “The world is not going to go back to the way it has been”]

The new order effectively deputized local health departments to enforce distancing order compliance on businesses and other organizations within their jurisdiction.

As a result, the local outbreak may be nearing its peak – perhaps as soon as 10 days from now, according to one model used by the White House, Inglesby said. He cautioned that models are only “best estimates” and that timelines vary model-to-model.

And he noted one encouraging data point that emerged out of Maryland very recently: there have been fewer COVID-19 cases and hospitalizations in the last 24 hours.

“It’s only one day of data. But if confirmed over time, it would be a very good move in the right direction,” he said. At that point –  alongside extensive measures taken to guard against another outbreak – the planning phase of how to ease Marylanders out of isolation could begin.